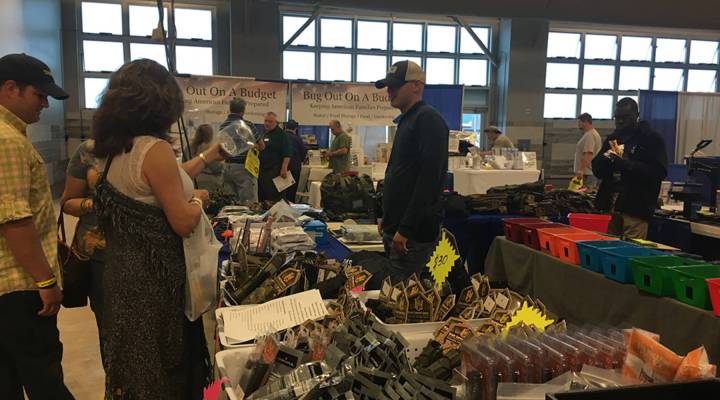 COPY
Customers check out survival gear, such as army backpacks, knives and freeze-dried food, at the National Preppers and Survivalists expo in Gonzales, Louisiana. Tegan Wendland

Political transitions sometimes translate into people buying emergency supplies, though their reasons may vary. It happened after the elections of presidents Reagan and Obama, and to the best of anyone’s ability to track it, it’s happening again with President Trump.

Companies that make bulk emergency supplies, like ready-made meals and water purifiers, have seen an uptick in sales. Prepper conventions are drawing thousands of people, and the American Preppers Network says membership increased to 40,000 this year, the highest it has ever been.

About 3,000 people attended the recent National Preppers and Survivalists expo in Gonzales, Louisiana.

Bob Harris, who runs Game Plan Experts, sold solar lights, knives and water filters at his booth, and said his most popular item was a “bug-out bag.”

“It has things like hygiene, food, water, first aid — everything that you would need for a three-day emergency,” he said.

Joe Burroughs, who attended the convention, already has a bug-out bag and expects an emergency to last more than three days.

“I bought these little survival lights,” Burroughs said. “They can be recharged many times. And I bought a ballistic bulletproof vest.”

Organizers say about 3,000 people attended the National Preppers and Survivalists expo in Gonzales, Louisiana, where vendors sold everything from freeze-dried sausage to bulletproof vests.

The solar lights make sense; Louisiana gets a lot of hurricanes. Burroughs said the bulletproof vest is to protect himself. He started buying emergency supplies when Obama was first elected, fearing for his gun rights. But since Trump’s election, he has different worries:

As a maintenance technician, he makes about $40,000 a year, and he’s investing about a $1,000 each year in emergency supplies.

Robert Meyer is a professor of risk management at the Wharton School at the University of Pennsylvania. He said the more vague the threat is, the greater the fear. In the 1800s, people had vampire protection kits, and in the 1950s, families built bomb shelters. But he said a fear of the unknown, like civil unrest and terrorism, isn’t good for society as a whole.

“It causes people to isolate themselves … and it basically feeds upon fear and spirals out of control,” Meyer said.

Which makes people more afraid, and maybe ultimately, not prepared for real threats, like natural disasters.

Burroughs said during the next hurricane, he’s not planning to evacuate. He’s staying put. The most important thing to him, he said, is not to rely on anyone else.