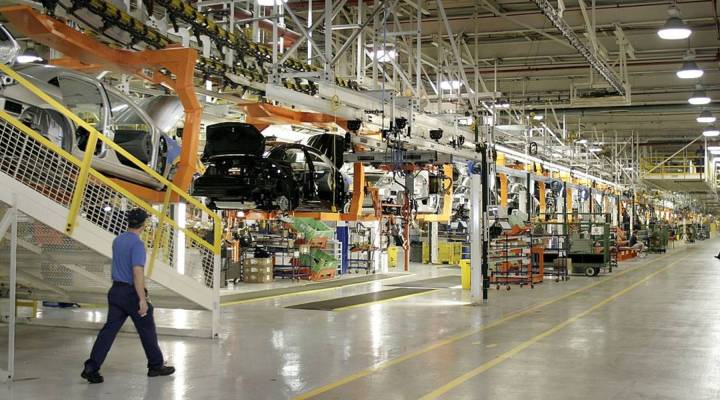 COPY
In the early NAFTA days of the 1990s, U.S. automakers were getting out of the business of parts-making. Over the next two decades, the supply chain exploded in every direction. Bill Pugliano/Getty Images
NAFTA Explained

In the early NAFTA days of the 1990s, U.S. automakers were getting out of the business of parts-making. Over the next two decades, the supply chain exploded in every direction. Bill Pugliano/Getty Images
Listen Now

In the debate over NAFTA, much has been made of outsourcing to Mexico, that is, products made in Mexico instead of the United States. But in the auto sector, the point of the trade deal was to combine countries’ abilities: Mexico plus the U.S. plus Canada.

This notion of “team NAFTA” has jumbled the mix of 30,000 parts and pieces in every new vehicle.

In the course of production, the parts inside every car visit Canada and Mexico and then return — over and over. In fact, they’ve been called industrial tourists, going over, connecting to another part, buying a bad T-shirt and then coming back.

It turns out the average part accumulates eight bad T-shirts along the way.

To explain all this, Dave Andrea at the Center for Automotive Research in Ann Arbor, Michigan, took the wheel of a 2014 Honda CR-V and explained all the companies behind that wheel. For every assembled piece, the supply chain goes 10 or 20 levels deep.

“You have the company making the leather,” Andrea said. “The company that’s providing the thread and the stitching is different. Behind that is the rim. The airbag is sourced by another supplier.”

The specifics of supplier relationships are often secret. But it’s a safe bet the metal rim of every steering wheel — when it’s still bare — travels south to get stitched and covered. That’s low-end, manual work done in lower-income places.

“That would need to be shipped to Mexico for the covering to be put on top of that and stitched,” Andrea said. “That part then could come back as an assembly.”

Under the hood, whenever someone starts a vehicle, the spark plug connects to a series of wires that meet in a kind of wiring hub. It’s called a harness, and those also tend to come from plants in Mexico. Andrea said one plant had a world map of all the pieces coming and going.

“It looked like one of the airline charts out of the back of the airline magazines,” Andrea said, “where you have the hub and spoke system. It’s that level of complexity.”

Often, the hubs on the map are the auto assembly centers in southern Mexico, Ontario and Michigan. Effectively, this makes for Team North America in the auto sector, competing against Team Europe and Team Asia.

The trend of supply-chain globalization began to take off in the early 1990s, right around when NAFTA took effect.

“The real increase in the pace of technical change was only kicking in around at that time,” said Mike Smitka, economics professor at Washington and Lee University in Lexington, Virginia.

In the early NAFTA days of the 1990s, U.S. automakers were getting out of the business of parts-making. Over the next two decades, the supply chain exploded in every direction, like an atom. Companies went everywhere, including to Mexico, for cheap labor.

“This is people with relatively modest skill levels,” Smitka said, “standing at a peg board, putting wires up and over pegs and then pulling out tape, very fancy tape, and then bundling them together.”

The automakers’ push to seek lower costs around the world has helped keep vehicles affordable. By one measure, car prices adjusted for upgrades and other options have stayed relatively flat since the 1990s.

Smitka called the NAFTA integration “near-shoring,” or keeping jobs close in North America as opposed to leaving for Europe or Asia. But the success of near-shoring requires smooth passage across North American borders.

“This border crossing is people, it’s physical goods,” Smitka said, “and being able to do it in a relatively hassle-free manner.”

To be sure, this free movement has allowed some jobs to migrate to Canada and Mexico. But others will stay.

Ann Arbor’s Hines Industries makes high-end testing machines for car companies. It sources some parts from abroad, though with today’s complex supply chain, it’s unclear exactly what the countries of origin are.

“We have a lot of parts that are imported from Germany,” CEO Dawn Hines said. “They say ‘Germany,’ but they could have been manufactured at the Mexican plant of Bosch and then sent to us.”

Still, her machines and production will likely stay in the industrial Midwest. Producing this equipment requires precision, experience and engineering — things that don’t travel well.

“Yes, there are balancing machine companies that crop up in a number of developing countries,” Hines said. “Do the major auto suppliers buy them? No, they don’t, because they don’t have the reliability and the brand recognition.”

So even if a vehicle was assembled in Mexico, a good portion of the content is likely from the States.

Take the 2014 Honda CR-V: According to the Kogod “Made in America” index from American University, the Mexico-assembled version of the vehicle is 68 percent American.