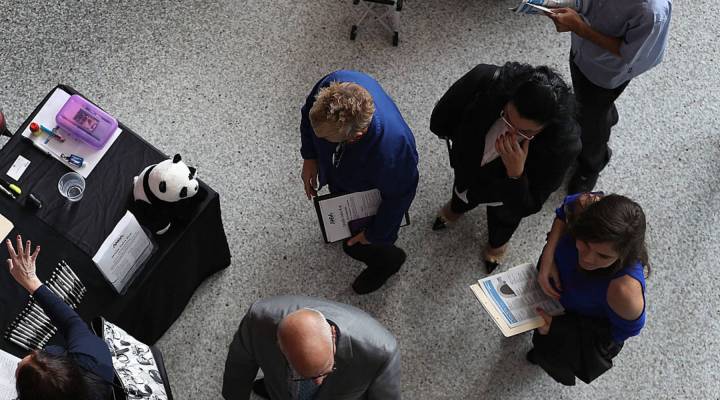 COPY
"Something like a third of the American population is starting to express pretty grave doubts in their ability to earn their success in the United States," says Arthur Brooks, president of the American Enterprise Institute. Above, people wait in line at a jobs fair in Sunrise, Florida. Joe Raedle/Getty Images

"Something like a third of the American population is starting to express pretty grave doubts in their ability to earn their success in the United States," says Arthur Brooks, president of the American Enterprise Institute. Above, people wait in line at a jobs fair in Sunrise, Florida. Joe Raedle/Getty Images
Listen Now

For some Americans, dignity isn’t a right so much as it’s a commodity. Or at least it is according to Arthur Brooks, the president of the American Enterprise Institute, who makes this argument in his article for Foreign Affairs, “The Dignity Deficit: Reclaiming Americans’ Sense of Purpose.” Marketplace host Kai Ryssdal spoke to Brooks about the article, and about where he thinks American culture is heading. Below is an edited transcript of their conversation.

Kai Ryssdal: Let’s talk about this piece you had in Foreign Affairs. You call it “The Dignity Deficit: Reclaiming Americans’ Sense of Purpose.” We lost it?

Arthur Brooks: Yeah. Not everybody did, but there’s this kind of a scary statistic for people like me who are really interested in the free enterprise system, which is that something like a third of the American population is starting to express pretty grave doubts in their ability to earn their success in the United States. You know, one of the things that I ask when I’m in front of audiences is to do a little thought experiment: What would happen if all of the poor people in America just disappeared? Would you know it if all the poor people in America suddenly disappeared? I daresay that most people listening to us today wouldn’t even know about it immediately. They have no emotional or moral connection to them.

Brooks: Yeah, it’s probably true, and what it leads to is that we’ve gotten incredibly good at helping poor people. We could be better, of course. But we’ve gotten terrible at needing people. And the essence of the American experiment is that we need literally everybody in the country, and we’re contravening the American experiment when we say effectively we don’t need whole groups of people. It’s actually un-American. You know, I’m just going to guess that the Ryssdals came to the United States. Not saying, “It sure is great to be in America where there’s a better system of forced income redistribution.” They came here because they were needed. There was something for them to do. And that’s an incredibly important thing to keep in mind. This is a country that was built on the back of ambitious riff-raff who are necessary. And today there’s, you know, some non-trivial percentage of the population, maybe a quarter of the population, that effectively the rest of us are saying we don’t need economically, socially, morally. And that’s what leads to what I call the dignity gap.

Ryssdal: I guess maybe I need you to define for me what you mean by “needed” because unless there’s clarity on that, I don’t know where this goes.

Brooks: We have to ask ourselves what does it mean to need another person. Is it central to the prosperity and future and security of our nation that each person be in the United States. That they exist here. That their work be taken quite seriously. And the answer clearly right now is no, and that’s what leads to so much sort of shocking idleness. And there’s one group in America today in particular that’s having lower and lower lifespans, and it’s whites 45 to 54 without a college education, especially men. And the reasons have to do with idleness. That has to do with what happens when people are idle, and there’s higher cirrhosis of the liver, higher suicide, much, much higher drug overdoses that come from the fact that there’s been an explosion of people in that age group that are not necessary to the workforce. So No. 1 is making them necessary for the prosperity of the country by getting them back to work.

Ryssdal: Which all makes sense except for this: We have retraining programs in this economy out the wahzoo, right, and yet we still have, just for instance, the 45- to 54-year-old men who can’t find places. We had a story on our morning show not too long ago in which a gentleman went from retraining to retraining to retraining because jobs kept getting either automated or shipped out from under him. What are we to do?

Brooks: Well, for one thing, it doesn’t mean give up on that. The main reason that people who are older wind up being displaced and permanently displaced is because we’re getting less and less mobile. Kai, this is probably going to shock you: From when you and I were kids, the percentage of American families that move from state to state in a given year has been cut in half. Literally, there’s only half as much geographic mobility as there has been in the past. And so this idea of staying where you are, wanting job retraining but not moving to where the jobs are, it’s just crazy by the standards of the 1970s in the United States. Yet that’s standard operating procedure in the States, so one of the things we also have to do is to get people moving more. That’s a completely American thing. My own family moved west every generation, like, one step ahead of the law basically. And that was just the way things worked. And now the concept that we’ve got to stay in a town even when we don’t have any work simply because the family is there or that’s where we’ve always lived … I mean that’s sort of anathema to the American experience.

Ryssdal: Are you optimistic that these changes you are calling for, and that you clearly say we need as an economy, can happen?

Brooks: I actually am, because we can renew our society. And this typically happened every few decades in the United States, where there’s this kind of frontier spirit that overtakes the country, where people start taking their future into their own hands and public policymakers start to play along. Now here’s the interesting thing, Kai. I mean, I would like to see aspirational leadership that’s responsible. But typically what happens is that there’s a kind of pioneer spirit that comes from the grassroots up and then politicians get out in front of it. So what we need is a cultural change for Americans to start expecting that of themselves. It has, in fact, happened. It happened at various junctures in American history, when Americans moved around a lot more, and Americans became a lot more entrepreneurial. And maybe today on Marketplace we can stimulate a new cultural revolution in American mobility.