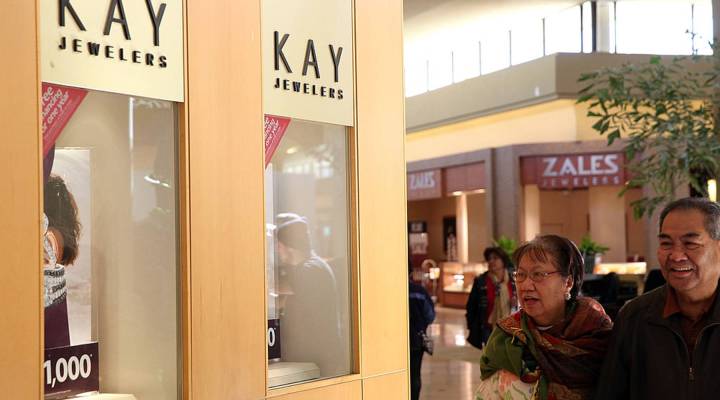 The Washington Post has obtained documents showing that about 250 former employees at Sterling Jewelers — which owns the Kay and Jared jewelry chains — are alleging widespread sexual harassment and discrimination.

It’s part of a much bigger private arbitration case that’s been quietly rolling along at Sterling. And that in itself is worth noting, since so many employees in America sign away rights to sue in open court as a condition of employment.

Washington Post reporter Drew Harwell, who broke the story, joined host David Brancaccio to discuss the employees’ claims and why they said they were feeling pressured by higher-ups. Below is an edited transcript.

David Brancaccio: Tell me about some of these allegations. They go back into the 1990s.

Drew Harwell: These women are part of this incredibly huge class action case that now involves 69,000 women, who are mainly sort of focusing on pay and promotion disparity at Sterling, which owns Kay and Jared.

Brancaccio: And just so we’re clear, there are some ugly allegations here, including some female subordinates feeling pressured into having sex with higher ups in order to, they thought, get a promotion.

Harwell: That’s right. Many women said this was the culture. They believed that bosses held the power, and that if they wanted to improve in their career, they had to go along with what their male boss suggested. And that, in many times, included a sexual relationship. So several of them told me they felt backed into a corner, like they really didn’t have any other option if they wanted to keep this job.

Brancaccio: And the company, Sterling, gave you a statement yesterday saying, “no, this is not happening here.”

Harwell: Sterling says when we have had accusations of this manner, we have investigated them; we have found that these aren’t really reflective of our culture.

Brancaccio: Now this is an arbitration case. That’s where so many disputes in America end up, because often when you get hired, you sign away the right to sue.

Harwell: They effectively signed away their right to take the company to public court. And if they had the right to take the complaint to public court, they would have had proceedings that were much more transparent. With arbitration, it’s a much more opaque process. However it resolves over the next years, I mean this is going to play a huge part in how Kay and Jared perform as a company, and sort of allow for whether these women can have closure or not.