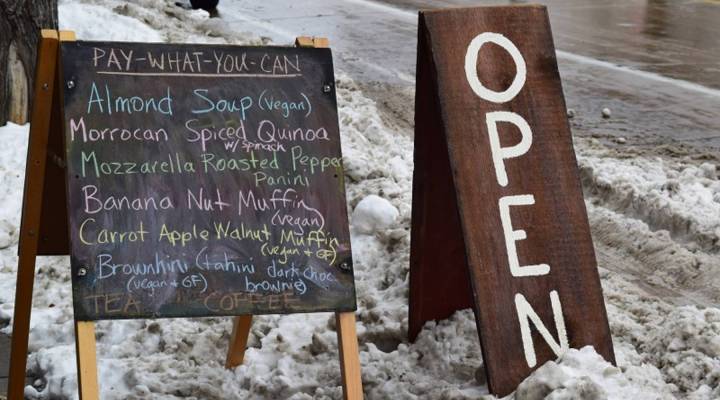 COPY
The Tricklebee Café in Milwaukee asks restaurant patrons to "pay what you can." Latoya Dennis

The Tricklebee Café in Milwaukee asks restaurant patrons to "pay what you can." Latoya Dennis
Listen Now

For people living in poverty, going out to dinner can be a luxury. And Christie Melby-Gibbons, a Milwaukee restaurant owner, believes that dining out should be available for low-income people as well as those who can pay for it.

“I have just always felt like everybody deserves to eat healthy, delicious, freshly made food,” she said.

She recently opened the Tricklebee Café, where people can pay what they think a meal is worth. Melby-Gibbons sees the “pay what you want” concept, used by other restaurants around the country, as a way to help feed low-income people in the city.

The menu at Tricklebee changes daily, but the food is locally sourced, typically vegetarian and consists of a soup, salad, sandwich and baked goods. The suggested price range is $5 to $7.

Tricklebee is one of about 50 pay-what-you-can cafes across the country dedicated to feeding low-income people, according to the organization One World Everybody Eats. Melby-Gibbons said that her customers are often surprised.

“When they come in, they’re dumbfounded, and when they leave, they’re delighted. Like ‘Whoa, what is this? You pay what you can?’” she said.

At lunchtime on a cold winter day recently, the cafe was packed. A church pulpit serves as the checkout counter with a red donations jar bolted to the top.

Christie Melby-Gibbons, who runs the Tricklebee Café, at the restaurant’s checkout counter. She says that on average, about two people a day have a meal without paying.

Melby-Gibbons is a minister and believes this cafe can survive in an area full of fast food restaurants and boarded up storefronts. She said that on average, two people a day have a meal without paying, and around 95 percent of her customers pay the suggested price or more.

Luke Hansen said he and his family plan to give a bit extra.

“You come to a place like this, and it really restores your faith in humanity. Just because someone doesn’t have a lot of money doesn’t mean they’re a lesser person,” he said.

Another patron, Cookie Taylor, said she would pay at least the suggested price. She said it could benefit those who can’t.

“I think there are people here who would eat better if they could afford to eat better,” Taylor said.

For most pay-what-you-can cafes across the country, fundraising is necessary. Melby-Gibbons said that in addition to the money made from the sale of food and beverages, she needs to raise about $28,000 to keep the nonprofit cafe afloat this year.