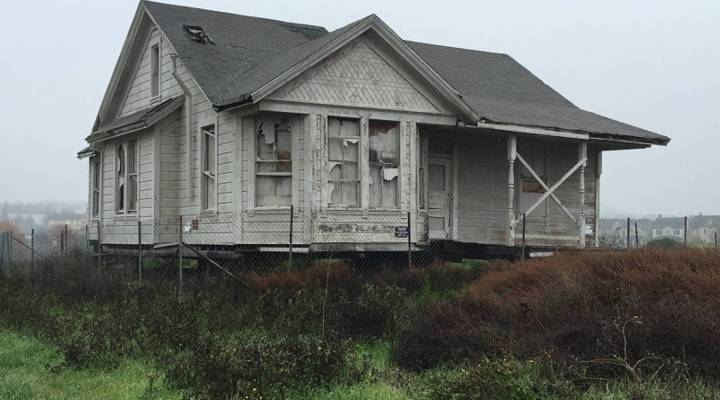 COPY
Even if it costs $300,000 to fix and move this house that sold in Hercules, Calif. for a dollar, the person who bought it thinks he can make a profit. Sam Harnett

Even if it costs $300,000 to fix and move this house that sold in Hercules, Calif. for a dollar, the person who bought it thinks he can make a profit. Sam Harnett
Listen Now

The median price for a house in the San Francisco Bay Area is around $700,000. Even so, a place just sold there for a buck. The story behind this one-dollar house involves the loss of redevelopment funds and explosives.

The house is located about 10 miles north of Berkeley, in Hercules, a small suburban city on the edge of the bay. The city gets its name from a large explosives company that moved there back in the 1880s, explained Steven Lawton, a local historian and real estate broker. And it’s a relic of that industrial boom.

Lawton said the house is “on the national register of historic places as a contributing structure to the only remaining company town of an explosives factory in the United States.”

The house is perched on a grassy lot where the city moved it to make way for new housing. It is in rough shape, but it has old-growth redwood timber, ornate wooden siding, and bay windows. The city planned to turn it into a community center using state redevelopment money, but in 2011 Gov. Jerry Brown cut those funds.

Lawton said the city now can’t even scrounge up $20,000 to demolish the house, let alone fix it. So the city put it on sale for a dollar.

It’s a little misleading to call this a house for a dollar, Lawton said. The house has no property because it is stranded on a city lot. The building would have to be fixed up and moved to a parcel of land.

Where some saw a project, Dmitri Belser saw opportunity.

Belser, who lives in Berkeley, restores and then rents out old buildings.

“My first thought when I saw the house was that this is our house, we have to take it,” Belser said.

Belser said certain old houses just have a feel. They aren’t utilitarian like modern homes. He started saving old places as a hobby, but the pastime has paid off. Belser has bought several one-dollar houses, and real estate is so expensive in the Bay Area that Belser has been able to fix them up and turn a profit.

Belser estimated that it might cost around $300,000 to renovate and move the Hercules house. That means it would be a $300,001 house in the end, which may sound like a lot. But this is the Bay Area. So that’s cheap.

Belser wants to keep the house close to Hercules, but he’s having trouble finding affordable property. Unlike this historic house, there’s no land nearby going for anywhere close to a dollar. 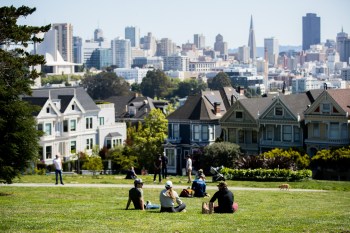 Can millennials afford a house without family help?