We've all been there.  Shaun Heasley/Getty Images
Listen Now

If, while on hold with your health insurance company, cable TV provider, bank, wireless phone service or airline, you imagine that the designer of the automated telephone system  keeping you locked up in the dark underbelly of customer service as a cold, heartless being who eats shredded tax returns for breakfast, it’s understandable. When you’re prompted by a chipper-voiced virtual assistant to enter a long string of digits, like account or social security number and then asked to repeat it all again to the human operator you’re eventually transferred to, it can be incredibly frustrating. However, you know who’s even more frustrated?  The people who designed the system.

“Sometimes it’s super frustrating because you enter in a bunch of information in there, only to have to repeat it again,” said Janelle Matthews,  senior vice president of solution strategy at Genesys, a company that designs interactive voice response systems or IVRs – what laypeople might refer to as phone trees. “It drives me crazy. So painful and it doesn’t have to happen.”

The technology necessary to solve the problem, notes Matthews, computer telephony integration, was invented 25 years ago. So when companies aren’t up to speed – “it’s kind of a really basic customer service party foul. Like you need to kind of get with the times,” she said.

But needless to say, companies don’t always take her advice.

Imagine caller ID on an iPhone. When a friend calls you see their picture and name pop up because all the information is linked.  That means your insurance company doesn’t have to ask you for your account number twice. But sometimes even the newest software doesn’t solve all the problems. In some cases human representatives ask us to repeat information as a stall tactic.

“Imagine yourself looking in front of a monitor, you’re taking call, after call after call. Because there are all different types of calls that you’re handling, in order to answer the customer’s question, you might have across a dozen different internet sites or applications on your computer to solve it,” Matthews explained.

Maybe your computer freezes. You don’t want your system to seem old or out of date.  So, while you wait you stall by asking for the information again.  After all, maybe you’re just double checking for security purposes. Maybe. But at this point we might be too angry to care.

A big problem, one designers often fail to take into account, is that customers may already be frustrated before they even dial the phone.

“Consider it – when do you call a company for customer support?” asked Walter Rolandi a human factors and speech scientist with Swampfox Technologies, a firm that builds customer experiences. “Something’s wrong. The world became imperfect today,” he said. “Your check didn’t clear, your product failed. Your phone isn’t working right. In a better world, you wouldn’t have any of these problems. You wouldn’t be on the phone, you would be doing something you would rather be doing. And unfortunately I don’t think a lot of people take that into consideration when designing these systems.”

Remember, it’s likely you have already spent time trying to solve the problem on your own. So your mood can quickly go downhill, especially when faced with robo-cliches.

“Things like thank you for calling Acme company, your call is very important to us,” said Rolandi. “Obviously they know that’s not true.”

But what is true is what you might call customer-service rage. A scenario straight out of a behavior psychology textbook. Consumers who encounter problems with automated systems, said Rolandi, are like rats in a science lab trained to press a bar for food that suddenly stops working.

For a consumer that can mean losing it. For a company that can mean losing a customer. But Rolandi says the irony is, in the world of automated phone systems success is measured in containment. That is, how many customers you can prevent from getting through to a human. Servicing their call without having to transfer it. “If you take that to an absurd point of view,” he said, “you could just answer the phone, waste a little bit of the person’s time, and then hang up.”

All of this is consumer misery is because it’s really expensive to talk to a human. “Clearly the number one motivator for companies is to avoid an agent talking to a customer,” said PV Kannan, co-founder and CEO of 24[7] a company that designs IVRs.

“An average call costs a U.S. company, roughly about $5. And that’s just an average call,” he said. “When you file a car insurance claim it could be as much as $15 or $20 because of the time involved.”

A credit card company might receive hundreds of millions of calls a year. Take that volume into account along with what Kannan says is the cost to talk to a computer, just a few cents, and it’s hard not to sympathize with trying to cut costs. At least a little bit. But talking to a computer can leave you feeling cynical which leads to another 21st century-customer-service question: do supervisors really exist? Or, are they like the grownup version of the tooth fairy and Santa Claus? Fairy tales woven to keep us in line and well behaved? They do exist, says Kannan.

“Typically there’s one supervisor for every twelve to fifteen agents,” he said. “But what the companies have figured out is, everyone is escalating it to a supervisor, so the agent puts it on a pause for a couple of seconds, picks up the phone, then pretends to be the supervisor.”

Just like when mom put you on the phone with the tooth fairy, but it turned out to be Aunt Martha.

But there may be some good news on the horizon. With the prevalence of apps which are meant to simplify consumer experiences – think Uber and Amazon, “it doesn’t matter whether you’re a credit card company or a cable company,” said Kannan. “No one is comparing you to another to another cable company – they’re comparing you to Uber and Amazon and Apple.” Which means customer experiences may improve.

However, only two of eight companies contacted by a reporter to ask about their phone-based customer service options followed up. And though a press contact for Kaiser Permanente, one of the nation’s largest health insurance providers said she’d also wondered why consumers often have to repeat themselves when calling automated systems, she explained that a spokesperson wouldn’t be available in time to comment.

“I always advocate in designing these things to have a humane transfer policy,” said Rolandi. “Don’t just torture this poor guy and never let him talk to someone. And things will work out better, I think for customer and company in the end.”

Notes Rolandi, he does everything he can to make the systems he works on pleasant and productive. But at the same time, “there’s still an awful lot of them out there that leave a lot to be desired.”

So the next time you’re stuck in what feels like the third-circle of phone-tree hell, waiting for a prompt that may not exist and feeling like a rat in a cage, just remember, there are other people out there, more frustrated than you and they’re the ones who designed the system. 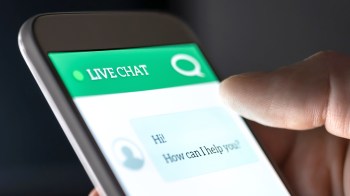