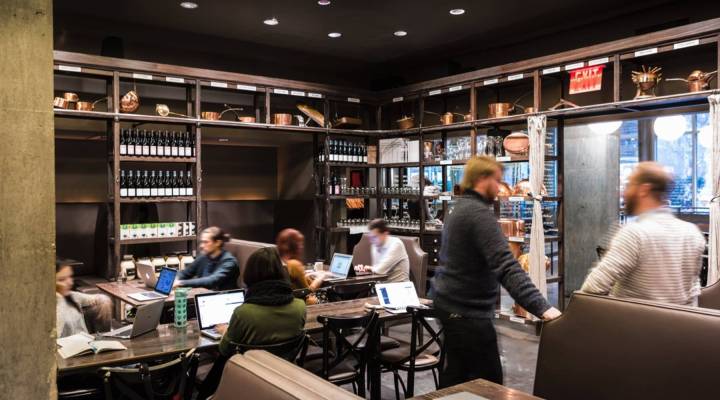 COPY
Will restaurants become the next co-working space? Spacious, a new startup, is betting yes. Spacious

If you’re in the real estate business, then you know that urban space can fetch a premium. But in cities like New York, the problem often is that there isn’t much space available. So what’s a developer to do? Get creative and look for more efficient ways of using space that may have been overlooked.

Entrepreneur Preston Pesek’s specialty is using real estate efficiently. There was a project with Yoga studios.

“Yoga studios had this strange pattern of occupancy, which is before work, 6 a.m. to 9 a.m., they’re packed, and after work, 6 p.m. to 9 p.m., they’re packed, but in the middle of the day, there’s just tons of down time,” he said. “So we were going to try to rent those slots to teachers who were looking to get more experience with students and actually build up their teaching base.”

It didn’t pan out.

“There’s probably a fine business there for somebody, but we decided it wasn’t the right market for us,” Pesek said.

Next, there was an exploration of what Pesek calls co-working hotels. A concept that would include a co-working space on the ground floor, but also makes use of the entire building space.

“When hotel guests were out during the day, you could potentially use those spaces for others who needed to host private meetings,” he said. “So to actually make that work functionally, we were going to do Murphy beds that lock up and are stored. And then lockable storage inside the unit so that people can be comfortable leaving their room for the day.”

Pesek said a building like this will probably exist one day, but he admits it would take some very careful design to make it work. It wasn’t until a trip to Tokyo, when he and his wife were jet lagged and looking for a place to get some Wi-Fi, that he had a brainstorm.

“The ‘aha’ moment came when I was traveling,” he said.

“Restaurants in New York are closed all day — why can’t we do that?” he continued. “The idea that when you put yourself into a new environment that’s not your everyday routine, it inspires creativity.”

There are more than 2,000 restaurants in New York City that don’t serve lunch, estimated Pesek.  His idea: to make use of the space by renting out all those empty tables as co-working space. Enter Spacious. Members pay $95 a month for access to all of the service’s spaces, or $29 a day. Then Spacious shares its profits with the restaurant.

“I mean the rent is being paid, the utilities are being paid. Most likely, if it’s a busy restaurant, there’s somebody in the building at all times, or most of the time,” said Clark Wolf, a food and restaurant business consultant. “So having some new income is something worth considering seriously.”

But Wolf noted there are also concerns that could make renting out space during the day costly.

“One of them is that you have a lot of strangers in there futzing around,” he said. “And it’s amazing what people will steal from a restaurant. They will take a picture that’s been bolted to the wall because somehow they think that if they’re in this semi-public space, then they have ownership of everything. It’s like stealing pencils from the office.”

There are bigger problems, Wolf said, like insurance premiums that could go up when a restaurant that’s usually empty during the day turns into a full one.

“If you’re closed for lunch, your insurance is less than if you’re open for passing groups,” he said.

And, while some of those workers could stick around to order a burger at dinnertime, Wolf said that might not be as profitable as it sounds.

“There are only two kinds of customers — regular customers and people you’re trying to make into regular customers,” he said. “So if you have passersby renting out the space, feeling like Airbnb strangers, it’s not in the DNA of the restaurant business. It’s just not good for the family.”

But Pesek said Spacious carries its own dedicated general liability policy to cover premises, and it is signing up restaurants like L’Apicio and Public, both in downtown Manhattan.

At DBGB, a Daniel Boulud Restaurant located on the Bowery, the walls are lined with wine bottles and copper pots. In the open kitchen, cooks are shucking corn and roasting carrots, and a giant pot of duck bones is becoming stock. There are no cubicles or fluorescent lights. The tables are full, but with co-workers staring at laptops instead of diners browsing menus or wine lists. Seated in the front of the restaurant, near a large sunny, window, 29-year-old Angela Pham said this is her third day using Spacious.

In a city like New York, there’s no shortage of options for co-working space. But restaurants, noted Pesek, each have a different look.

“If you need to schedule a meeting on the Lower East Side, the restaurant space is probably going to be already aesthetically appropriate for that audience,” he said. “Restaurants in a very real sense are kind of the fruit that a neighborhood produces naturally in terms of the aesthetic and quality and the vibe.”

From Pham’s table-turned-desk, there’s a nice view of the street, but also of the bar, which is closer than the bathroom in many offices. With a laugh, Pham calls the bar’s availability, beginning at 5 p.m., game changing.

“The fact that you could transition directly into happy hour certainly doesn’t hurt the workday,” she said.