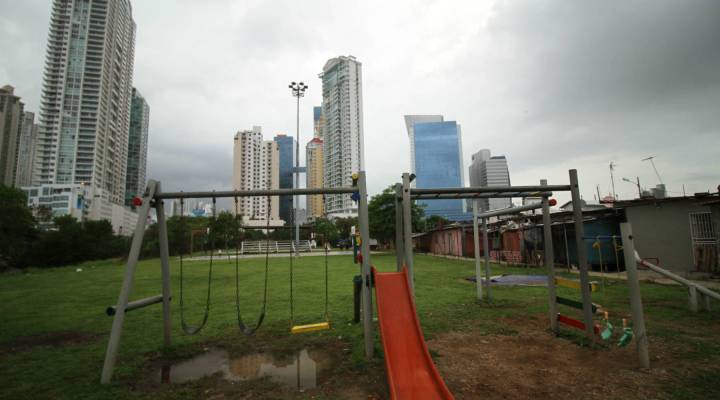 Panama is in the news this week for the opening for its new, expanded canal. It’s a GDP success story — the country has grown twice as fast as other countries in the region in the last 15 years. Thank the canal, thank its Singapore-style hub for financial services and thank its Dubai-style duty-free zone. But it’s still a country with grinding poverty and uncomfortable contrasts.

“My neighborhood is a community of resistance here in the city,” said Jessica Solis, a resident of Boca la Caja, a former fishing village now embedded in Panama City. “It’s a community that has held on to its customs in spite of the institutions — government past and present — that have tried to take away what little we have.”

The neighborhood is a cluster of low, working-class houses fed by streets where the pavement is either non-existent or cratered and lined with garbage that the city, for some reason, isn’t picking up. Solis is a social worker who also arranges for extra meals for local kids in the small, open air public space.

“I wanted to do more than just give these children a plate of food. I wanted to give them another vision of what life can look like, a vision of progress,” she said.

Solis is also fighting to stay in Boca la Caja, where, as she sees it, real estate developers are dangling low offers for property to get residents to sell and be gone.

It’s potentially prime real estate. Just across a wall is the ritziest shopping complex outside of Beverly Hills.

Yet on Boca la Caja’s side of the wall, kids looking for something to do play stickball with the carcass of a crow.

“Sometimes with these things, you try not to think about it. Not because you don’t want to think about the problem, but because economic inequality is a problem at the national level,” Solis said.

Kids in Boca la Caja play stickball with the carcass of a crow.

A World Bank assessment emphasized recent progress on narrowing the divide between rich and poor here. But a CIA analysis notes Panama has the second-worst income distribution in Latin America and that “strong economic performance has not translated into broadly shared prosperity.”

A few blocks north of struggling Boca la Caja is the neighborhood of San Francisco, where Hilary Hughes-Winstead lives on a high floor of an apartment building with middle-class residents. She’s the mother of two young kids and her husband is an executive at an organic juice company. Hughes-Winstead grew up in the old canal zone, formerly run by the Americans, and was in 9th grade when the U.S. turned the canal over to Panama in 1999.

“You just need to drive around Panama to see so much money; there’s so much,” Hughes-Winstead said. “Like today, there was a Ferrari parked behind my car. I’m like, ‘What?’ And you would think that the government would find ways to apply all that cash flow.” But it’s the gap toward the lower-income end that she finds much more disturbing.

“First of all, our education is horrible. It needs to be shaken up and it needs to be injected with lots of money,” Hughes-Winstead said. Panamanian officials agree that Panama’s income distribution is a blight.

Hilary Hughes-Winstead grew up in Panama and now lives in a middle-class San Francisco, Panama, neighborhood.

“For 2016, we’re expected to be the fastest-growing economy in Latin America,” said Ivan Zarak, Panama’s vice minister of the economy. “But once you actually go to one of those communities and see how they’re living, then it becomes shocking. There’s so much prosperity in one part of the country, and then there’s misery in other parts of the country.”

“I [had] an idea the other day that’s sort of a crazy idea. The government of Panama is spending about a $1.5 billion on education, and we’re not getting a good education,” Eisenmann said. “The canal, after the expansion, should make a net profit of a $1.5 billion. I would like to see 100 percent of the profits of the canal going to education.”

The canal proceeds now get dumped into the pool that is the Panama treasury, where elected officials decide how all the public money is spent. Eisenmann’s idea would only lift education standards if the schools getting the canal money also get reformed — something he’s working on through a nonprofit.

“If the canal’s going to write a check, who’s the canal going to write the check to?” Eisenmann asked. “That’s the big question. The way our organization for education is today, it’s not working.”

At this point, dedicating canal profits to schools is really just a thought experiment and not a serious policy proposal. But the idea does suggest a way that through education, the new, expanded Panama Canal might some day end up lifting even more boats.

For a timeline of the Panama Canal’s history, click here.