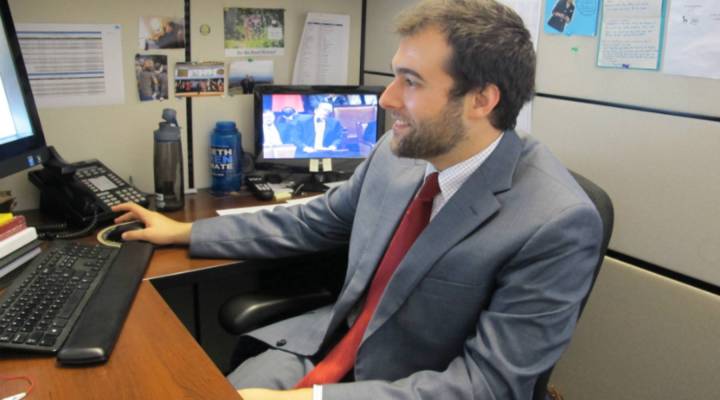 COPY
James Pollack, legislative correspondent for Congresswoman Jackie Speier, uses a software program to sort through the emails from constituents, and says the office gets back to each contact in about two weeks.  Kimberly Adams/Marketplace

James Pollack, legislative correspondent for Congresswoman Jackie Speier, uses a software program to sort through the emails from constituents, and says the office gets back to each contact in about two weeks.  Kimberly Adams/Marketplace
Listen Now

Lobbyists and advocates for various issues often encourage citizens to write their member of Congress to nudge them toward a particular policy outcome. But the old-fashioned letter, of course, is no longer the way most people communicate.

The House of Representatives receives about half as much mail as it did five years ago, according to the office of the Chief Administrative Officer, which handles digital and paper communication for the House.

Representatives still do receive some mail. James Pollack, the legislative correspondent for the office of Congresswoman Jackie Speier of California, said letters tend to come from a few regular writers with issues they care strongly about, or groups writing at the same time.

“It is really cool when you get physical mail,” Pollack said. “Especially, they tend to be the cuter mail. So we’ll get … a bunch of Girl Scouts writing in about bees.”

Pollack said the most important aspect of his job is constituent communication, and the vast majority of people email.

But on social media, it doesn’t take nearly as many people to have a similar impact. That’s according to the Congressional Management Foundation. The group did a survey that suggested it would take just 30 constituents on social media to draw the attention of congressional staffers. Bradford Fitch is president of the group and co-author of the report, and said that number is pretty significant.

“Because in this town,” he said, “if you think about the kind of money that’s spent on trying to generate thousands of emails or letters or postcards or protests or things like that — it’s huge.”

Several companies have built software to filter and sort that deluge of emails, faxes and calls. Defense contractor Lockheed Martin — which has provided financial support to the Congressional Management Foundation — offers one such platform, Intranet Quorum.

“It has about two-thirds of the members of Congress using it currently,” said Scott Gray, the vice president for IT and security solutions for the company. “It integrates … all the emails, the phone calls, the office visits, even postal mail, and now social media feeds.”

In Speier’s office, Pollack uses the Intranet Quorum software to sort form letters from unique communication. He said all constituent communication gets counted, but there are certain things that will definitely make it to the Congresswoman’s desk.

“I think one really well-worded, compelling letter raises a flag,” he said, especially if it’s about a piece of legislation the office might not yet be following.

Pollack said it doesn’t really matter if the letter is paper or digital. But with dozens of empty filing cabinets once used for sorting mail now sitting empty, an old-fashioned letter probably will have less competition for his attention.