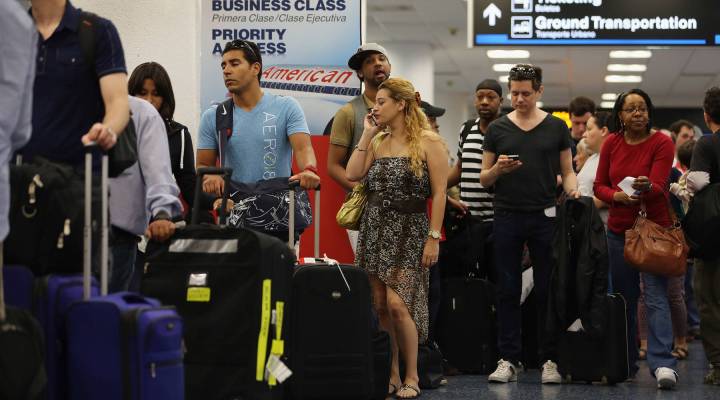 As part of our I’ve Always Wondered series, we answer questions and explain some of the economic mysteries brought to our attention by our listeners. Here, we turn to a question from Lamonte Freerks, who asks “I would like to know why airlines see the need to overbook planes, thus at times bumping paid passengers.”  Marketplace’s Sabri Ben-Achour wondered the same thing recently.

The irony was not lost on Danielle Sharp as the announcement came on over the loudspeaker at 5:30 a.m. at Newark airport.

Danielle Sharp was most definitely not boarding. Though paid and checked in for a trip to Oklahoma, her ticket had also been sold to someone else.

“The flight is overbooked, so we’re just sitting here waiting. The flight is leaving in 15 minutes and we’re just stuck here,” she says when reached at the airport. “It’s really stressful and aggravating. I got here at 3 a.m. for a 6 o’clock flight.”

Why would an airline do this? How hard is it to count the number of seats on a plane and not sell more than that?

“I have no idea,” Sharp says, resigned. “But it’s obvious they care more about their money than they care about us, ’cause they wouldn’t inconvenience us like this. It’s about a buck.”

Why do they do it?

“Contrary to what popular perception may be, airlines are not evil,” says Samuel Engel, who leads the Aviation Practice at consulting firm ICF international. It’s not an accident that airlines overbook their flights, and it boils down to one simple reason: “Some passengers don’t show up.”

In fact, some passengers are almost always not going to show up.

“So if you know that’s going to be the case, you’re setting yourself up for flying with empty seats and wasting them,” says Engel.

But wait, if people don’t show up, aren’t the airlines then just selling the same seat twice and making gobs of money off of the poor jerks who are left behind when people actually do all show up?

No, says Engel, because the airlines “don’t get revenue for a seat that goes empty.”  It’s true someone has paid for that seat, but in most cases that person will end up being given a free flight by the airline to accommodate them if they were just running late, for example.

“Some passengers will just not show up because they didn’t want to take the trip, but more cases than not, they arrived at the airport 15 minutes late ’cause there was traffic and they missed their flight and the airline is going to accommodate them on another flight.”

So if airlines didn’t overbook, they would lose money, so they actually put a lot of effort and money into guessing exactly how many people won’t show up on a given flight.

These models predict a lot of things: how many seats should the airline sell for cheaper to people who buy earlier? How many can it get away with setting aside in order to charge higher prices for last-minute business travelers? How many people won’t show up? In the event everyone with a ticket does show up, how many people will accept a voucher for free miles in order to take a different flight?

For the no-show predictions, “those systems have large historical databases of no-show rates on previous departures of the same time of day and in the same markets, used to build forecasts,” says Belobaba.

With the advent of big data, airlines can feed even more information into their models.

“People returning from a long weekend are more likely to show up as compared to people who are starting their trip for business. How long ago you bought your ticket, has it been ticketed, those all can be correlated with no show behavior,” says Belobaba.

The cutting edge models, says ICF International’s Samuel Engel, also take into account the competing fares at any given moment from competitor airlines. If every airline is eyeing what one another is doing, things can get quite complicated.

“It’s a field of very happy geeks mired in the data balancing the statistics and economics trying to make better decisions,” says Engel.

They are actually pretty good at guessing

It turns out, those models work pretty well.

“If you look back, you’ll see the U.S. airline industry has reduced the denied boarding rate almost in half in the last 15 years,” says Engel. “In 1999, 0.2 percent of passengers were denied boarding. Last year, it was under 0.1 percent.  And only 1/10th of those were ‘involuntarily denied boarding,’ where passengers did not choose to take a different flight” in exchange for a voucher or incentive.

United Airlines, whose flight Danielle Sharp was bumped off of, says much of the 1/10th of 1/10th of one percent of involuntary denied boarding is due to grounded planes and not overbooking. The outliers usually occur when there is an unexpected disruption, like weather, a problem at an airport, or some other factor.

Many analysts argue that overbooking keeps ticket prices down.

“If you look historically when airlines were running with half their seats empty, fares were much much higher than they were today,” says Engel. “The nice way to look at all this is, the more effectively airlines can fill their seats and generate revenue with the seats they have, the better it is for all of us.”

Well, not all of us.

While customers who voluntarily give up their seat in exchange for a ticket voucher are, all things equal, usually happy about it, customers who don’t volunteer and are forcibly bumped from a flight are not.

So in those cases, the airlines pay up — in cash. Government regulations actually require them to (you can see how they’re calculated here).

As Sharp waited in front of the desk in front of the gate she would have boarded on, the ticketing agent entered a few keystrokes into her computer with confident finality, and turned to Sharp with a resolution.

Consternation transmogrified into joy, and Sharp burst out into laughter. Oklahoma must have seemed very far away indeed.

“Thank you lord! That is a blessing!”