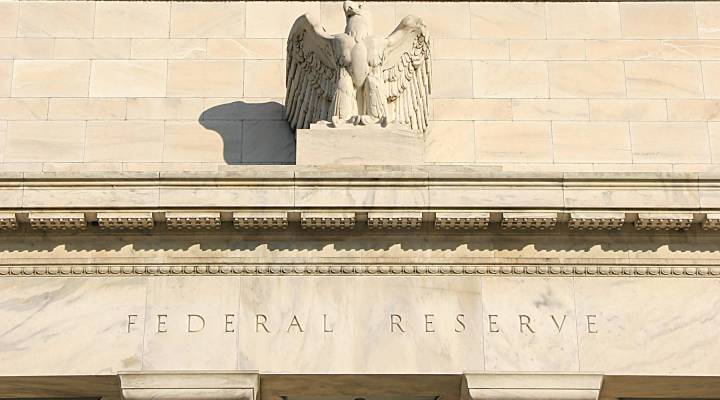 The Federal Reserve's most recent policy move is simply a way of driving down interest rates. But how does it work? Sr. Producer Paddy Hirsch explains Operation Twist with a simple analogy. Karen Bleier/AFP/Getty Images
Marketplace Whiteboard®

The Federal Reserve's most recent policy move is simply a way of driving down interest rates. But how does it work? Sr. Producer Paddy Hirsch explains Operation Twist with a simple analogy. Karen Bleier/AFP/Getty Images

So how does it get that rate down?

OK, now this shouldn’t be too hard to imagine, but let’s pretend that a single company controls all the diamonds in the world. It has an inventory of gems, which it sells bit by bit into the market. Let’s say there are three main types of stone — the small ones, which go into necklaces and things; the medium ones, for wedding rings, and the big ones which rap artists hang around their necks as pendants.

One day, the company decides that it wants to make one of the types of gems more expensive — to increase demand for it, in other words. Its plan comes in two phases.

Phase one: raising the cash. The company rings up all the brokers that it deals with, and sells a hefty chunk of its inventory of small stones. There’s always demand for small stones from the public, so the brokers lap up the business, and the diamond company is now a lot richer.

Phase two: create the demand. The company makes a second series of calls to its brokers, asking them to find as many medium-sized stones as they can: the diamond company is a buyer. The brokers rush out and vacuum up as many medium-sized diamonds as they can, and pretty soon the diamond company has spent all its cash and has a much bigger inventory of medium diamonds.

The result: there are lots of small diamonds in the market, but comparatively few medium stones. And people want to get married! So demand for those medium stones rises, and the price goes up. The diamond company has successfully manipulated the market.

In this analogy, the Fed is the diamond company; the small stones are short-term debt; the big stones are 30-year bonds, and the medium stones are the all important 10-year Treasury note. The Fed could print the money it needs to buy up those 10-year bonds, but it has already done enough of that. Instead, it raises cash by selling short-term debt, and uses the money to buy the 10-year bond. That pushes the 10-year bond price up, and as we all know, as bond prices rise, so yields fall. Now it’s cheaper for the Fed to borrow 10-year money, but more importantly, it gets cheaper for consumers to borrow, because our loans are set based on that 10-year yield.

That’s the theory. Problem is, rates are already very low, and that’s not doing much for the economy because restrictions on lending are so onerous that it’s well nigh impossible to get a loan! Until that changes, we’re going to be stuck in this hole.