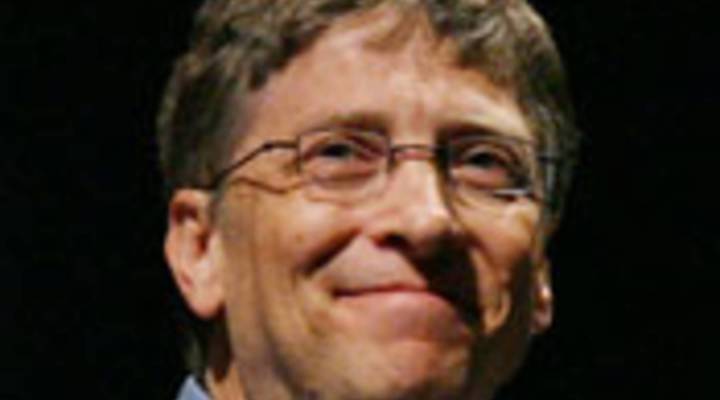 Bob Moon: Bill Gates is about to launch version 2.0 of one of the most successful careers in modern history. Gates is officially giving up the helm at Microsoft tomorrow to focus on his charitable foundation.

He’s leaving a software empire that’s made him one of the richest people on the planet, but not so long ago Gates was a college dropout trying to build an upstart company with his childhood friend. He ended up defining the way computers operate and in the process changing the way the world operates.

As Stacey Vanek-Smith reports, that’s not his only legacy.

Stacey Vanek-Smith: Before the Bill Gates era, CEOs were the guys who played a lot of golf, sealed deals over fat cigars and didn’t care much about the people who worked for them.

Daddy Warbucks from “Annie”: I am a businessman. I love money, I love power, I love capitalism. I do not now and never will love children.

Seth Sternberg: It’s like, hey, we’re a bunch of friends who are working together to solve this big problem.

29-year old Seth Sternberg is the CEO of Meebo, an instant messaging service for the web. He says at his company, old-school management won’t work.

Sternberg: I don’t really think of myself as, you know, the CEO boss man. The number one challenge we have as a business is finding really, really awesome people and convincing them that they should join, right? ‘Cause those are people that put out the products.

When he founded Microsoft in 1975, Bill Gates was a totally new kind of CEO. He was the geeky, socially awkward brainiac most companies kept in the back room and he made his code-writing compatriots the stars of the company.

Danny Shader: You’d walk into a cubicle to interview with somebody and they’d pull up their PC and say, “Let me show you my product,” and it was so different than another company I interviewed with that’s now dead. The engineers were literally across the city and the product people had no clue what the engineers were doing. In that regard, Microsoft was the ultimate product-centric company.

And it made the ultimate products, like DOS, Windows and Microsoft Office.

Meritocracy was the hallmark of Gates’ management style and Shader, who has worked at Amazon, Netscape and Motorola, says the culture Microsoft built still defines Silicon Valley.

Shader: It’s pretty easy to tell in this business who is producing what. The companies that make it tend to have cultures where the real achievers are rewarded fairly for their contribution and people want to work in that kind of environment.

Gates was notorious for the demands he put on employees, but Microsoft also offered great payback. The company would do your laundry, buy your groceries, serve you drinks. That legacy’s going strong, as heard in this ad for Google.

[Google Ad]: We have yoga. We have pilates.

The food here, by the way, is great.

John Battelle co-founded Wired Magazine. He says Microsoft was the pioneer of the new-agey workplace, making work as comfortable, inspiring and fun as possible so workers would spend lots of time there.

John Battelle: And as a matter of fact, at Wired we adopted that stuff. We had a chef and a masseuse, all sorts of services, because we wanted our employees to stick around. I believe Microsoft gets a lot of credit for that.

Bill Gates didn’t even finish college, but the office culture he created at Microsoft is now being taught at the country’s top business schools.

Robert Joss is the Dean of the Graduate Business School at Stanford.

Robert Joss: So you ask yourself, how do you manage in a way that makes people more creative every day? And that’s the thing that they really find they’ve had to learn the most on the job and we’re trying to see if we can’t do more of that here at school.

And it’s not just industry that’s looking to Silicon Valley for inspiration. Journalist John Battelle says the Microsoft culture that fostered and rewarded innovation is now being applied in other areas.

Battelle: People are turning to this philosophy to try to solve some of the world’s hairier problems like global warming, geopolitical conflict…

And public health. Bill Gates will devote his time to the Gates Foundation and apply the Microsoft mindset to philanthropy, where he’ll work on leaving another legacy — like a world without malaria.

In the Silicon Valley, I’m Stacey Vanek-Smith for Marketplace.