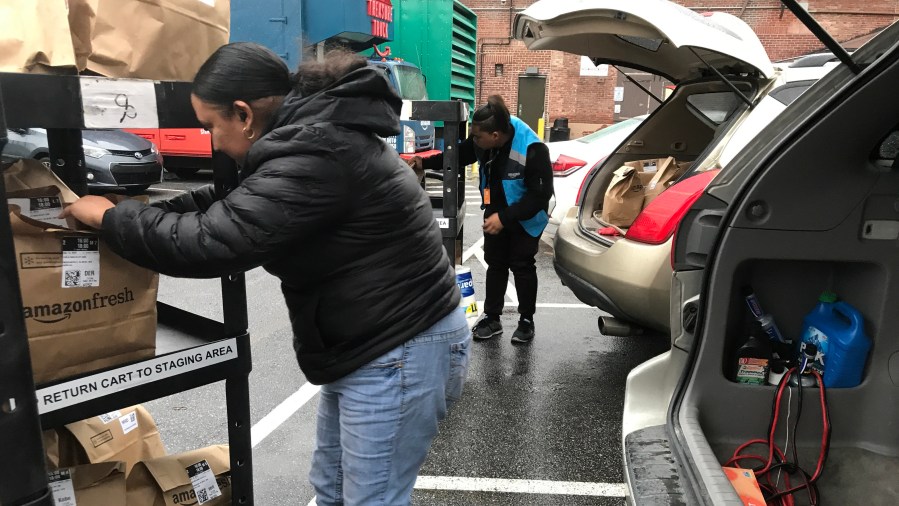 Prior to the pandemic, Julia Soler loads groceries into her minivan to deliver for Amazon Flex. Stephanie Hughes/Marketplace

When Julia Soler’s out in Philadelphia delivering packages and groceries for Amazon Flex, she often sees people asking for money. So, she stocks her minivan before she goes out.

“When it gets cold, I always keep a bag of gloves, a bag of hats,” Soler said. “As I drive around, I hand them out to the homeless.”

Throughout the pandemic, people like Soler have kept their communities going. Not just through their donations of hats and gloves, but through their deliveries of groceries, packages and medicine. Companies including Instacart, Amazon and DoorDash use armies of independent contractors, not employees, to make those deliveries.

Soler is the main source of income in her household. She lives with her two kids, who are 18 and 20 and in remote school, and her boyfriend, who’s on dialysis for kidney failure. She’s busy and appreciates that gig work is available to her when she has time.

On a winter day before the pandemic, Soler had a full schedule delivering for Amazon Flex. At the start of her afternoon shift, she scanned the bags with the Flex app on her phone at the Amazon warehouse, loaded them in her Toyota Sienna and headed out.

“You use your phone for everything,” Soler said. “That’s how I know that I picked up all of the packages. Then it’ll show your first, very first delivery.”

The Flex app is a major point of communication with the company. It’s how Soler picks up work, sometimes spending hours refreshing it to see if shifts are available. It’s also how she learns where to make deliveries. On this day, the schedule is ambitious: She had one stop in downtown Philadelphia, and then the rest were in New Jersey. Which is right next to the city but can still take a while to get to, especially in rush-hour traffic. Which we got caught in.

“This is going nowhere,” Soler said. “People are getting out of their cars.”

Then it started to rain. The Amazon GPS app sent us the wrong way. We got lost in a giant apartment building.

As each delay hit, Soler worried. She had another shift right after this one, which meant we needed to finish the deliveries in New Jersey and get back to Philadelphia before it started. She still had a few stops to go, dozens of bags in her car and less than an hour left. She wondered if she could finish these deliveries and show up a little late to her next shift.

But she wasn’t an employee, so she didn’t have a boss back at the warehouse whom she could call. Instead, she called the 800 number Amazon gave its drivers. Soler tapped through the options until a customer-service rep got on the line, who said, yeah, Soler needed to be on time for her next shift. So she should just bring the groceries back.

To be clear, we were in New Jersey, with food that had to be delivered in New Jersey. But Soler had to take it back to Philadelphia. The groceries, including meat and frozen food, had been in the car for a couple of hours. And it wasn’t like Soler had a special refrigeration unit.

Marketplace asked Amazon what its policy is on dealing with undelivered groceries, and the company didn’t answer directly. Drivers said that a lot of those groceries are just thrown out.

“I feel like a messed-up person. Like, I feel sad. There are so many hungry people out here,” Soler said.

Soler was worried not just about the food, but about her livelihood. Drivers can get in trouble if they bring back a lot of groceries, which means they might not be able to work for Amazon Flex anymore.

Soler has held on to the gig. She’s still working for Amazon Flex and relied on it to make ends meet throughout the pandemic. But she dreams of running her own business someday, when she’ll be truly independent.

“Amazon is a good company, but there’s no room for advancement. As a driver, I’m always just going to be a driver,” she said. “I always say that it’s good for a second job, not for a first job.”

For more of Julia Soler’s story, you should subscribe to the Marketplace podcast “The Uncertain Hour.”

For a little background on Amazon and why it might have leaned into using nonemployees, check out a letter Amazon CEO Jeff Bezos wrote to shareholders when the company went public in 1997. He said: “We will work hard to spend wisely and maintain our lean culture.”

Some would say that Amazon has an obligation to its shareholders to complete deliveries at as low a cost as it can. And if the company can get the job done without having to pay for employee benefits or overtime or their cars, why wouldn’t it? After all, Costco’s share price went down when it raised its starting wages.

But on that note, a piece in Wired earlier this week notes that some of Amazon’s nonemployee drivers are trying to figure out if and how they can unionize. It sounds like it would be an uphill battle, but with recent victories at Amazon warehouses and an administration in the White House that’s heavily in favor of workers’ rights, maybe not outside the realm of possibility.

The future of online shopping, after the pandemic 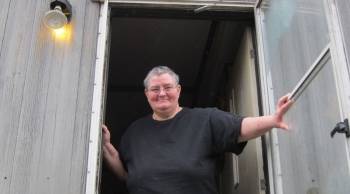