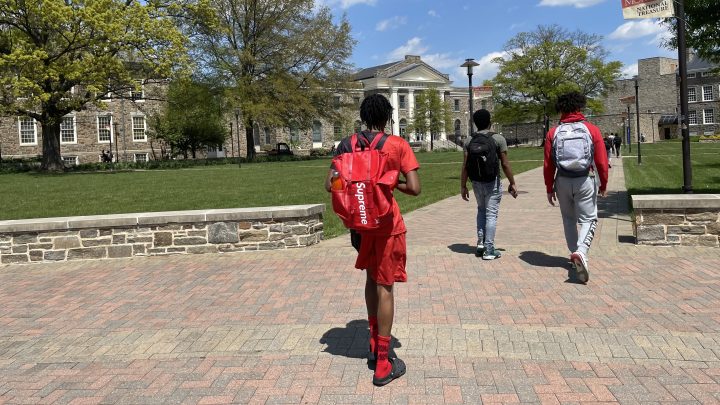 Freshman Travyonna Jefferson is sitting on the quad of Morgan State University in Baltimore. It’s the lead up to finals, and Jefferson is studying political science. She came to Morgan because it offered her plenty of financial aid, and because it’s a historically Black school.

“I do like being surrounded by Black people. We all relate. I love it,” Jefferson said. “It brings more comfort and a bit more security. Yeah, I feel safer here.”

Jefferson did consider other schools, including predominately white institutions, or PWIs.

“What goes on here is you’re around a bunch of people who grew up similar as you. You guys relate to a lot of the same stuff. As opposed to going to a PWI, if you say something, they’re going to be like, ‘What are you talking about?’” Jefferson said.

Morgan State is one of the 100 or so historically Black colleges and universities, or HBCUs, in this country. Many were established in the years following the Civil War to educate Black men and women who were not welcome at places that educated white people. Now, a number of those schools are seeing increased enrollment, propelled in part by the Black Lives Matter movement. Morgan State is one of them: Its freshman class nearly doubled last fall from the previous year.

Keisha Campbell, who directs enrollment services at Morgan, points out that a lot of HBCUs have a history of social activism. The school posted a sign on campus that says: “Morgan State University: Where Black Lives Have Always Mattered.”

“You can have those types of open conversations and open pieces of discourse and talk about what that means for you as a person, for you culturally, how you identify with those feelings of being a Black person in America,” Campbell said.

Campbell also pointed out that it’s not just Black students who attend Morgan.

“You have all of these different folks that are coming together, saying I just want to be in an environment that welcomes me for who I am and what I am,” Campbell said.

Another ongoing conversation at the school is about money. It’s public, so tuition and fees are about $8,000 a year for undergraduates from Maryland and $18,000 for out-of-state students. Still, that’s less than half of what most private colleges charge.

Junior Pamela Osseyi said the price tag, including her financial aid package, was one of the reasons she chose Morgan.

“I like that it’s close to home. It’s in state. Money, financials really do matter,” Osseyi said.

And there are other reasons people are now turning to HBCUs, including prestigious alumni.

Robert Mason is founder of the Common Black College Application, which lets people apply to dozens of HBCUs around the country, including Morgan, with one application for a $20 fee. Mason expects about 40,000 applications on the platform this year, about four times what it was in 2016. He said the fact that Vice President Kamala Harris is a graduate of Howard University, an HBCU in Washington, D.C., has also raised awareness.

“For those that might consider an HBCU less than a majority school, that clearly refutes that argument,” Mason said.

That interest translates into more money in the form of tuition and donations.

And support is crucial if students are going to get their degrees. Morgan State’s graduation rate is 46%, higher than the average for HBCUs, but still not where the school wants it to be. Morgan’s Keisha Campbell points out a lot of the school’s students are nontraditional.

“It may take them more time because they’re not able to go straight through, or they’re taking two classes because they’re working and supporting their families. I don’t think that’s any different than a lot of other schools that you see, but it’s also just the world now,” Campbell said.

About 70% of students who attend HBCUs are eligible for government Pell Grants, which are available to low-income families. That’s according to the research of Marybeth Gasman, who studies historically Black schools as a professor at Rutgers. She was eligible for a Pell Grant herself and says having less money makes it harder to get through college.

Meanwhile, many upperclassmen have spent a good chunk of their college careers attending classes virtually, including a group of psych majors gathered in the lobby of Morgan’s new social sciences building. Junior Alexis Carlon will be the first in her family to get a bachelor’s degree.

“This semester is semester-ing. But yeah, going all the way,” Carlon said. “Not that college wasn’t serious in the beginning. But I have to figure a lot more stuff out now.”

Carlon said one of the reasons she chose Morgan is that it offers a course on Black psychology.

“Psychology is an old white man’s discipline,” Carlon said. “But you need to know how to apply disciplines to other communities. If you’re only realizing it from one said group, that kind of makes it difficult, and I feel like it doesn’t allow you to be as competitive in the workforce.”

Carlon’s classmate, Pamela Osseyi, points out that only 4% of psychologists in the United States are Black.

It’s possible for Morgan students to provide these services in an entrepreneurial way, said Lenae Wharton, another psych major.

“Being here at Morgan, it showed me that you’ve got to make your own table,” Wharton said. “I know a lot of people, they kind of think that once you graduate, you’re going to be in a whiter space. … Morgan has shown me that doesn’t have to be what you do.”

Wharton said a lot of Morgan alumni have their own mental health clinics and are willing to give students like her a chance.

That’s a cycle that’s good for her, for the university and for the reputation of HBCUs everywhere.