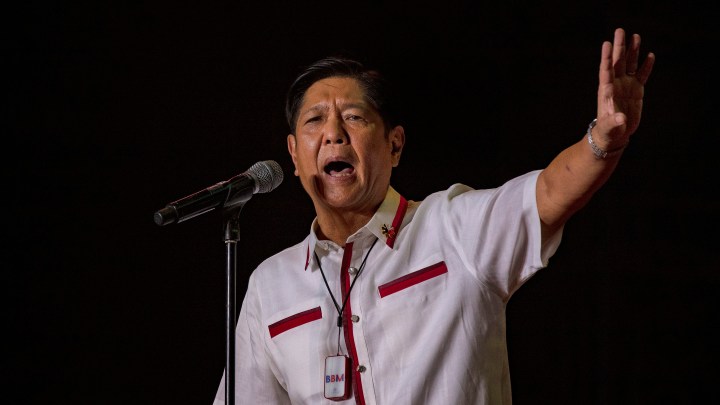 He’s the son of a deposed dictator. His mother, who was convicted on corruption charges related to illicit financial dealings, became notorious for her massive shoe collection. Now, 36 years after his family fled the Southeast Asian nation, Ferdinand Marcos Jr. is on course to become the next president of the Philippines in what’s being described as a landslide victory. So, how did the son of a former dictator become the frontrunner? And what does his presidency mean for the local and regional economy?

Howard Johnson is the Philippines correspondent for the BBC. He spoke with “Marketplace Morning Report” host David Brancaccio, and the following is an edited transcript of their conversation.

David Brancaccio: A new leader on the way in the Philippines, Ferdinand Marcos, Jr. Do you have a sense of why investors seem a bit leery about having him at the helm here?

Howard Johnson: Well, we have to look back at the Marcos’ track record. They have spirited away money to Swiss bank accounts, that’s on the record. And yet voters in the Philippines were whitewashed — there was a lot of social media, changing the narrative in the Philippines. So they projected this idea of Ferdinand Marcos, the father of [Marcos Jr.] as being a shrewd economist who could bring about good things. But actually the reality was at the end of his tenure in 1986, shortly before he was ousted from the Philippines, the country was close to being effectively bankrupt. So, really, investors are looking at this and saying, “Well, is this a country that I can trust?”

Brancaccio: The world is also watching to see how the Philippines’ relationship with China evolves. How do you see that going forward under this new regime?

Johnson: Ferdinand “Bongbong” Marcos Jr. has been attending lots of events over the last few years with the Chinese Embassy, nothing unusual there. But he has really not sounded off against the country. He’s talked about strengthening bilateral relationships. He’s talked about dealing with the South China Sea issue. He’s talked about even looking into offshore oil exploration with the Chinese government. So this is a pro-Chinese government. It’s also reaching out to America still, Bongbong Marcos said we will continue the close relationship the two countries have. But there are questions over what is Marcos’ strategy? Is he going to pivot further away from America, as did Rodrigo Duterte, the incumbent president? Will he move closer to Beijing in the next six years?

Brancaccio: He’s got work to do in the Philippines — of course on pandemic, but also the economy.

Johnson: The economy is in a dire state and was in recession, as was many other countries around the world. But the Philippines was particularly hard hit because of its very strong lockdown. So what Marcos has inherited is a very tricky economic situation. He has promised a golden age for the country, but has to deliver it against the toughest of economic conditions.