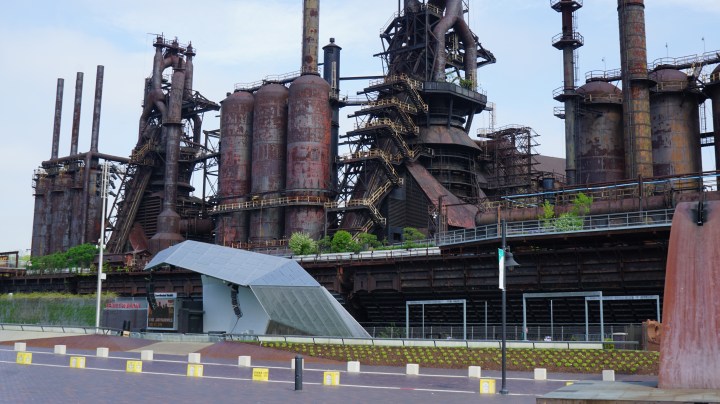 COPY
Rusted blast furnaces at the SteelStacks campus in Bethlehem, Pennsylvania are seen. They now serve as a backdrop for music concerts. Jessica Lee

Rusted blast furnaces at the SteelStacks campus in Bethlehem, Pennsylvania are seen. They now serve as a backdrop for music concerts. Jessica Lee
Listen Now

The Lehigh Valley still bears some of the scars of the collapse of its steel industry made famous in the singer Billy Joel’s “Allentown,” which starts with the lyrics “well we’re living here in Allentown … and they’re closing all the factories down.”

“That Billy Joel song kind of haunts us to this day,” said Don Cunningham, president and CEO of the Lehigh Valley Economic Development Corporation.

Cunningham was the mayor of nearby Bethlehem, Pennsylvania, and ran the city during those hard times.

Now, the rusted blast furnaces that mark Bethlehem’s skyline are mainly used as a backdrop for concerts and television shoots. Cunningham said that Joel’s song was “fairly accurate” when it came out back in the early 1980s.

“But that was many decades ago — and economically a whole ‘nother era ago — when the Lehigh Valley was really driven by heavy industry,” said Cunningham.

Cunningham, who now runs the region’s economic development initiatives, pointed out that the area still makes and moves things, just not steel anymore.

“The Lehigh Valley really has emerged as both a center for e-commerce — for moving product to population centers — and fortunately for us, making product,” he said. “Manufacturing is the second biggest part of our economy.”

Cunningham explained that part of what makes the area attractive to manufacturers and those in the e-commerce industry is that it’s within a day’s driving distance to around a third of U.S. consumers. So, it’s attractive to companies looking to shorten supply chains, like subscription pet food maker Spot and Tango.

“I think controlling our destiny — and that includes the supply chain — is a really important feature and facet of our business,” said Russell Breuer, the founder and CEO of Spot and Tango.

Breuer said his company is investing around $20 million to build its first manufacturing facility in one of Allentown’s suburbs.

The facility will be minutes away from an Ocean Spray bottling plant, an Amazon fulfillment center and one of FedEx’s largest ground hubs.

“We’re a young company and we’re thriving and being around and with like-minded individuals and entities and businesses is very exciting for us,” Breuer said.

Spot and Tango’s plant is expected to open in July 2022.