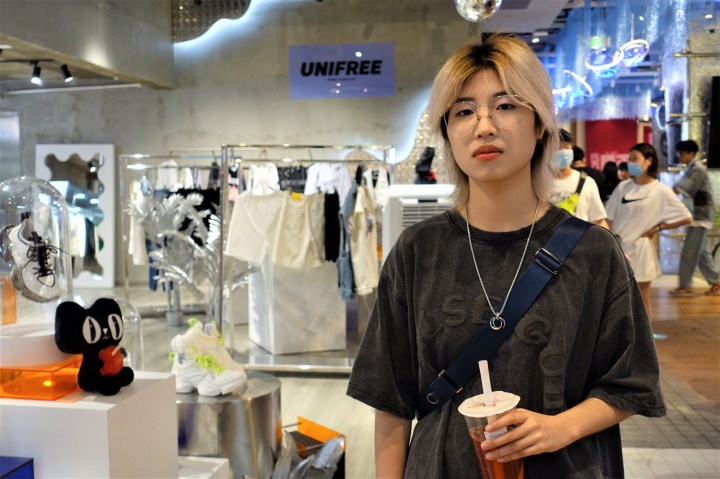 COPY
Finance major Zhou Hui, 19, spends up to $700 a month on clothing and eating out, which the COVID-19 pandemic didn't change. Charles Zhang/Marketplace

Finance major Zhou Hui, 19, spends up to $700 a month on clothing and eating out, which the COVID-19 pandemic didn't change. Charles Zhang/Marketplace
Listen Now

Shanghai’s TX Huaihai mall is the trendiest place to see and be seen for college students, such as finance major Zhou Hui.

The 19-year-old has platinum-blond hair, orange coral-colored lipstick and an oversize, black T-shirt.

Her spending didn’t change much even during the COVID-19 lockdown in China last year.

Domestic consumption is a major contributor to the country’s growth, but it has been lagging behind the industrial and export sectors in the pandemic recovery. July retail sales in China grew by 8.5% compared to a year earlier, which was below analyst expectations. That was in part due to the surge of the delta variant of the coronavirus, spurring localized lockdowns and mass testing even when only one case is confirmed. Families are also spending more on housing, health care and education, which account for roughly 40% of household spending.

Some retailers are focusing on young consumers like Zhou to boost sales.

“I bought a lot of clothes online during the pandemic since we weren’t allowed to leave the university campus,” Zhou said.

Interior design graduate An Xin, 24, said she reduced her spending during the lockdown, but she is making up for it.

“Now that the pandemic is under control and most people are vaccinated, I find myself buying a bit more — sort of revenge spending,” she said.

Like many of their peers, An and Zhou’s parents pay for their college education and they will graduate without debt.

Tiffany Xu, head of the TX Huaihai mall project, said her target market is male and female shoppers age 18 to 25 who are financially carefree, which is partly attributable to their growing up under the one-child-per-family policy.

“They have up to six adults — their parents and both sets of grandparents — taking care of them. They don’t have any housing pressures because as an only child, they may inherit all their parents’ and grandparents’ properties — three in total,” Xu said. “That is why this generation is willing to spend.”

What young people want to buy are harder-to-find items, like the products on offer by TX Huaihai mall tenant ENG clothing. Women make up 65% of its customers. Since the pandemic, its sales have gone up “a lot,” owner Sherry Huang said.

“One reason is consumers can’t leave China. The other is we choose popular items from the U.S. and Europe that haven’t arrived in China yet,” Huang said. “That is why we have celebrity clients like actress Fan Bingbing buying from us.”

The lack of international travel has also been good for Silicon Valley startup BorderX Lab. Its e-commerce app, Beyond, links China’s middle class to some 200 European and American merchants.

“Merchants can be brands like Michael Kors [and] boutique stores like Coltorti in Italy. They can be multibrand retailers like Macy’s or Foot Locker,” BorderX Lab CEO Albert Shen said. The firm also counts Bloomingdale’s and Saks Fifth Avenue as its clients.

BorderX uses algorithms to provide just-in-time delivery. Shen, an ex-Google software engineer, said his platform’s prices are close to what people pay in the U.S. or Europe, making them cheaper than what the same brands charge in China.

Half of users are members of Generation Z, typically defined as people born between 1997 and 2012, while the rest are millennials. About 70% of Shen’s customers are female and spread across the larger Chinese cities.

“In China, women [are] usually the keeper of the purse, the driver of purchasing decisions for the family,” he said.

Many in China refer to this as the “she economy.” Local media periodically nod to the importance of female spenders. One Shanghai mall even gave away 10,000 tubes of lipstick to celebrate the she economy.

It is hard to come by reliable figures on its size. However, young women are the dominant buyers of pets and wine. Even a male-dominated sector like video games reported that female players increased their spending by 14% in 2018 to 49 billion yuan ($7.6 billion). In 2019, the number of women playing video games grew to account for 46% of China’s 650 million players.

Women are becoming more educated and delaying marriage and childbirth. They have more spending power. German luxury car brand Mercedes-Benz, for example, tapped into the theme of independent women on China’s social media platform Xiaohongshu, or Little Red Book, with its She campaign.

A post on International Women’s Day in March showed Lynn Xu, a prosecutor-turned-lawyer and livestreamer, talking about stepping outside of her comfort zone. Noticeably absent were a husband and children in this rare portrayal of a happy single woman. In China, officials often treat unmarried women over the age of 27 as “leftovers” and a problem that requires solving.

Some brands that try to appeal to women didn’t get it quite right.

Chinese firm Ubras hired a male comedian to advertise a bra. He referred to the bra as a “career life jacket” and implied women could use their bodies to get ahead at work. The company was forced to apologize, and the comedian was fined $135,000 last month for being vulgar.

“When we started six years ago, the consumer culture then was to buy the trend,” said Shen, the CEO of BorderX Lab. “Everyone [liked] the same bags or same lipsticks. Those people spent money strategically to buy brands that could show they were successful.”

“It’s about your style, your preference, who you are,” Shen said.

An Xin wore a pair of blue-and-white Nike high-top sneakers but told Marketplace that she will not be purchasing any more because of the American company’s statement that it does not source cotton from China’s western region of Xinjiang. There are concerns that members of the Muslim Uyghur minority are being arbitrarily detained there and forced to work in cotton fields and other places. The Chinese government denies these allegations.

China’s Communist Youth League sparked a consumer boycott against the likes of Nike, Adidas and H&M.

“I stopped supporting Nike,” An said. “I don’t buy many American brands anymore after the Xinjiang incident. Now I buy fashionable brands in China, as well as from some designers in Europe.”

The boycott comes at a time when young Chinese are more accepting of domestic brands than previous generations were.

Retailers like ENG, which traditionally focused on American and European brands, are taking notice.

“Right now, patriotism is popular, and so I’ve also introduced some Chinese brands in our collection,” ENG owner Huang said.

When violence against Asians notched up in the U.S. and overseas after the COVID-19 outbreak, Huang said, her company was active in anti-Asian hate campaigns. It linked up with friends in Paris to put up posters against anti-Asian violence and supported Chinese designers by adding their products to its online WeChat shop. She said proceeds from those sales were donated to anti-Asian violence causes. She feels it’s important that her company be more than just a retailer.

“Young people don’t just pay attention to products, but also the culture and values behind them. They will pay [a premium] for these,” Huang said.