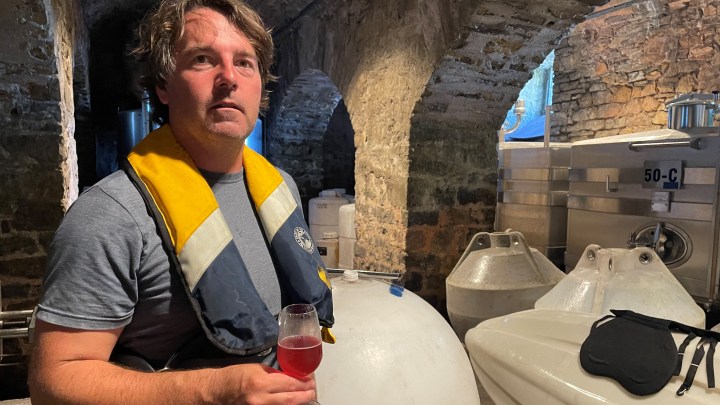 Emmanuel Poirmeur, a winemaker, samples a glass of wine that fermented in big, white barrels under the sea. John Laurenson

Emmanuel Poirmeur, a winemaker, samples a glass of wine that fermented in big, white barrels under the sea. John Laurenson

A winemaker in southwest France has invented and patented a new process that involves submerging wine barrels under water.

In the French Basque Country, in the bay off Saint-Jean-de-Luz, undersea winemaker Emmanuel Poirmeur is pointing to something below the water that looks like big white buoys.

They are arranged in neat lines 15 meters down. Scuba divers anchor them to the seabed to ferment the wine in very unusual conditions.

“They have a constant pressure and movement and stability of temperature, so they are moving with the ocean and, doing that, their metabolism, their habits, are very different so they create strange aromas, ocean aromas,” he said, describing the process.

Later, on land, he siphons out a couple of glasses of cloudy white. The taste is surprising: very strong, lemony.

“Like when you smell citrus,” he said. “It fits very well with our gastronomy, seafood and fish.”

The rosés, whites and reds are all slightly fizzy and, often, the taste of fruit is so strong you might mistake it for fruit juice rather than wine.

At the Nicolas wine store in the nearby resort town of Biarritz, Egiategia — Poirmeur’s undersea wine — sells for just under $50 a bottle for the pure underwater version and $15 for a land-sea blend.

Manager Denis Bajolle said it’s one of his biggest sellers.

“In July and August, it’s our best selling wine,” he said, speaking in French. “People want to try, want to see, this wine that has aged in the water.”

Poirmeur said he is selling 200,000 bottles a year — up from 10,000 just five years ago. But he is also selling the right to use his process. Underwater wine will soon be made in Spain and Paris as well.