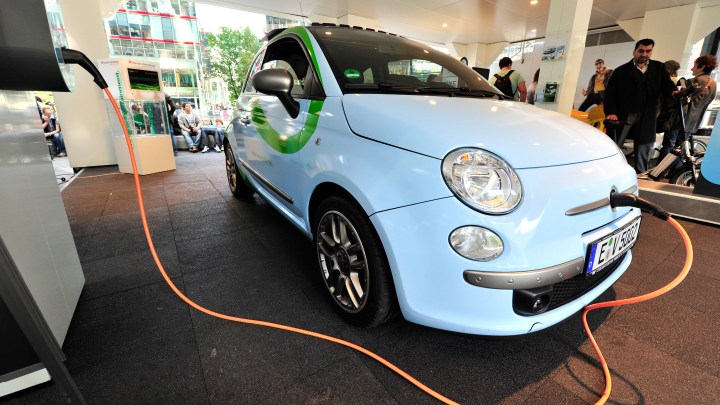 COPY
Some consumers may be put off by the purchase prices of electric vehicles, but lower maintenance may outweigh those costs. John MacDougall/AFP via Getty Images
A Warmer World

Some consumers may be put off by the purchase prices of electric vehicles, but lower maintenance may outweigh those costs. John MacDougall/AFP via Getty Images
Listen Now

Early on a Friday in Austin, Texas, the crew at Happy Hybrid is already hard at work, changing the tires on a Toyota Tacoma.

Next to the truck, there’s a little Smart car up on a platform getting some work done, and a cluster of four Toyota Priuses are lined up outside.

“It’s been working great with the hybrids,” Broomfield said. “Most independent shops are very terrified of working on the vehicles. They’re overwhelmed, and they just won’t even touch ‘em.”

What the shop doesn’t see, though, are fully electric vehicles. No Teslas, Nissan Leafs or Chevy Bolts.

There are a few reasons for that, Broomfield said. For one, only dealers have access to replacement batteries for those that go out. And dealers are very protective of their technology.

“A lot of the fixes on these cars require proprietary software, downloads and so forth,” he said. “And so the customers are forced to go to the dealer.”

Electric vehicles also have fewer moving parts, so they don’t require as many repairs.

“You don’t have to change your oil, you don’t have as many spark plugs and all of these different facets,” said Camron Proctor, a former engineer at Sandia National Laboratories who worked on a study published by the Department of Energy looking at the total cost of electric vehicles. “You don’t have an exhaust system, right? Many of these things don’t exist.”

Proctor said the main goal of that study was to answer a few simple questions: “What is going to encourage people to purchase an alternative fuel vehicle? Is it cheaper upfront costs? Or is it cheaper fuel prices? Is it lower maintenance?”

The study found that over the ownership life of an electric car, an average driver will save about $8,000 on maintenance.

Depending on how someone purchases an electric vehicle, they could start saving quickly, according to Chris Harto, a senior policy analyst in transportation and energy at Consumer Reports.

“You’ll start saving money in Year One,” he said. “Even though you ‘paid more,’ your savings on fuel and maintenance will make up for the increased payment on that vehicle.”

But even the director of the vehicle technologies office at the Department of Energy, David Howell, said that unfortunately, that’s not what people think about when buying a car.

“The upfront cost is a key,” Howell said. “People buy vehicles pretty much based on how much it’s going to cost them right upfront. You know, purchase price.”

He said as batteries get cheaper, so will the upfront cost.

Of course, it’s not that electric cars are maintenance-free. They have wheels, brakes, lots of sensors and pricey batteries. Then there’s what the folks at J.D. Power call “dependability” — basically, how many problems car owners deal with over the course of a year.

In J.D. Power’s annual survey, Teslas ranked 30th out of 33 brands, but not necessarily because they’re alternate fuel cars.

“Most of the problems that customers report with Teslas really aren’t related to it being an electric vehicle,” said Dave Sargent, vice president of automotive quality at J.D. Power. “It’s much more due to Tesla being relatively new at manufacturing vehicles at all.”

Those are the kinds of things Broomfield at Happy Hybrid can help people with, even on electric vehicles, but he can’t charge a lot for that kind of repair.

And his crew of eight mechanics aren’t really trained to work on electric vehicles at this point anyway.

Broomfield studied sustainability in college. He said he hopes to eventually marry his two passions: cars and the environment.

“I’d probably move away from, you know, the mainstream car and go to doing conversions on classics,” he said. “Like, take a ‘65 Mustang and put in a high-power electric motor, and guess what? All of a sudden, it’s faster than it ever was with a gasoline engine. It’s quiet, it’s smooth, but you still get the look of the ‘65 Mustang.”

It’s not going to sound like a ‘65 Mustang, but it’s probably going to be cheaper to keep on the road and a lot better for the planet.