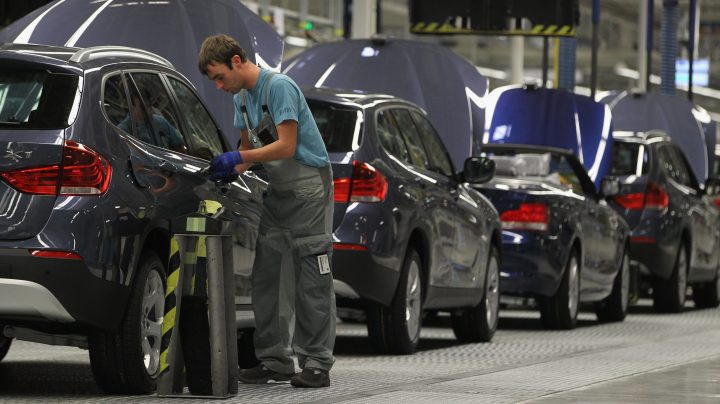 As U.S. cities begin to lift COVID-19 restrictions, some are carrying out strategies to boost job creation and economic growth in the post-pandemic recovery.

David Britt is chair of the economic development committee of the Spartanburg County Council in northern South Carolina. Britt said Spartanburg is seeing more investment this year than in the last four years, with $1.2 billion put into the economy in the last six months.

Spartanburg hosts one of the biggest BMW plants in the world, and Britt said about 36% of the county’s employment is auto-related. As the local population grows and more U.S. companies bring their supply chains closer to home, Britt said, he’s optimistic about the county’s economic future.

“We’ve actually worked hard to prove to the world that we’re not a one-hit wonder,” he said. “So what’s happened this year, I think we’ve proven to our existing base, all these manufacturing investors.”

He spoke to “Marketplace” host Kai Ryssdal about Spartanburg County’s post-pandemic investment boom. The following is an edited transcript of their conversation.

Kai Ryssdal: So, it’s been about a year, actually, since we were in touch, and things were, as most things were a year ago, a little tenuous in Spartanburg County. How are things now?

David Britt: Far better than we ever imagined or could have ever planned. It’s been incredible.

Ryssdal: So, if I were to get on a plane and come back down to Spartanburg and go out to, you know, have a bite to eat or something, what’s the mood? I think [that’s] the question in, you know, upcountry South Carolina.

Britt: You probably would not recognize Spartanburg from when you were here last. We’re having 20.6 people move to Spartanburg every day. Just from Jan. 1 of this year to June 30, we’ve had $1.2 billion invested in the county, and 3,100 jobs coming off a pandemic. So I mean, these are not just record numbers, these are Earth-shattering numbers for us.

Ryssdal: Well, and congratulations to you for it, sir, but understanding that your job is economic — well, your, you know, sideline, as it were, because you’ve actually got a day job — but you know, your job, as it were, is economic development in Spartanburg County. What kinds of jobs are coming in? Are the companies staying? Is it costing any tax revenue outlay, those kinds of things? Because it can’t be all sunshine and light.

Britt: Well, that’s a great question. But it has been all sunshine for us these six months. And again, Kai, you know, I’ve been here when we did not have any jobs, and nobody wanted to move here. And in 1992, when BMW decided to move here, that changed everything for us, and we’ve actually worked hard to prove to the world that we’re not a one-hit wonder. So what’s happened this year, I think we’ve proven, you know, to our existing base, you know, all these manufacturing investors. You know, four weeks ago, Oshkosh Defense, an international company, they’re building a manufacturing facility here that will do all the United States Postal Service, new electric vehicles for the whole country, right here in Spartanburg.

Ryssdal: How much of what you are able to do now is because of assistance from the various virus relief packages? And I’m asking because it looks like that tap may well be run out given the state of play in Congress right now. You know, there was some bipartisanship early on, certainly under President Trump, right? He passed a big package, and President Biden passed his package. I don’t, let me ask you, do you see more help from the federal government coming in? Are you going to be all right without that?

Britt: We don’t see any impact from the federal government on our success.

Britt: I mean, it is bold, but I know these companies. I deal with, every one of them, in negotiating them to come here. But what’s happened for our explosion of growth, the supply chain, COVID taught companies here in the U.S., you can’t be all over the world in a pandemic. So I think you’re seeing a lot of these companies move back, and particularly [to] Spartanburg. Plus, we’re seeing tremendous population explosion. They’re coming here in droves because this is where jobs are. The quality of life is, you know, out of this world. You were here, you saw — an hour from the mountains, three hours from the beach.

Britt: It was not just a little humid. It was hot as all get-out, yep.

Ryssdal: Last thing, and then I’ll let you go. Are you keeping an eye on the delta [coronavirus] variant? I mean, you know, South Carolina has been open for a while. Unemployment benefits have ended in June. How worried are you about another wave?

Britt: I am concerned. Yeah, I got my vaccine publicly, and as did everybody else. We’re still encouraging folks because it is a problem, and our task force will stay on top of it.