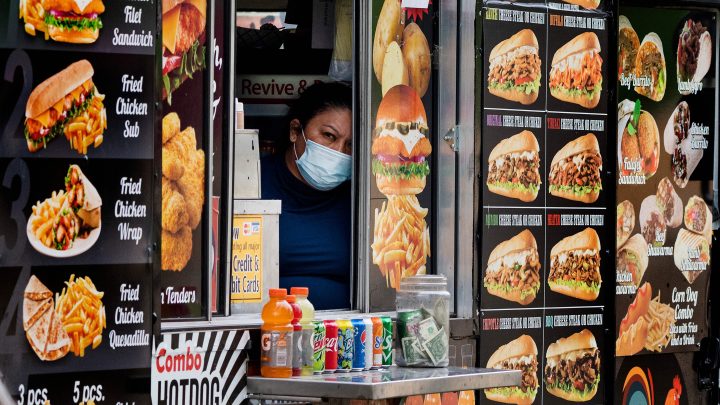 COPY
“The office space that had been the bread and butter for the food truck industry hasn't come back yet,” says Matt Geller, president of the National Food Truck Association. Jim Watson/AFP via Getty Images

“The office space that had been the bread and butter for the food truck industry hasn't come back yet,” says Matt Geller, president of the National Food Truck Association. Jim Watson/AFP via Getty Images
Listen Now

When office work went virtual last year, it forced the food truck industry to make a U-turn. Matt Geller, president of the National Food Truck Association and founder of an online food truck booking and ordering platform called Best Food Trucks, told “Marketplace” host Kai Ryssdal he saw many food trucks pivoting from lunch service in urban areas to dinner events in the suburbs where many people were clustered during the pandemic.

With some workers now returning to in-person offices after more than a year away, Ryssdal spoke with Geller about what’s next for the industry. The following is an edited transcript of their conversation.

Kai Ryssdal: It has been almost exactly a year since we last had you on the program. How has the year been, just broadly speaking?

Pivot from office spaces to neighborhoods

Ryssdal: Well, yeah, so let’s, let’s continue with the metaphor of the pivot. You’re not going to pivot back to office spaces, right? You’re going to sort of drive in both lanes, as it were?

Geller: Yeah, I mean, the hope is that we have now created a secondary shift for food trucks. So we go back to the 11 a.m. to 2 p.m. as it starts to come back, and we keep the evening shifts, more like a traditional restaurant. And so if that happens, they can see quite a bit more revenue, and we’re hoping that it does.

Ryssdal: So, you said, “if that happens.” how big is the “if” in that clause there?

Geller: I should have said “when.” We’re already seeing people reaching out to us. And the interesting thing is people don’t want to bring back — when I say people, I say business parks, buildings — a lot of them aren’t planning on bringing back their cafeterias. So they’re looking out and they’re reaching out to food trucks to say, “Hey, can you service us in a regular rotation?” So I know it’s a win, I just don’t know the length of time it’s going to take to get back to a quote-unquote normal.

Ryssdal: Yeah, we should say here that in the past year, not all trucks have survived, right?

Geller: That’s definitely true. Quite a few trucks have gone out of business, but I will say also, there’s a lot of trucks that have started up during the pandemic, and there are trucks that have basically put themselves on hold, and I can see them coming back now.

Ryssdal: You know, one of the things that happened with a lot of restaurants since they were obliged to close, many in the beginning, is that a lot of their staff went and found something else to do, and now that restaurants can reopen at a fuller capacity, those people who used to work in the food service business are like, “Yeah, no, I don’t want to come back, because it’s long hours, the pay’s not great and you have to deal with people and all of that jazz.” Are you discovering any staffing challenges as food trucks try to come back or try to sort of do this, you know, two-tier strategy?

Geller: Huge staffing challenges. One of the things that’s a little bit different about food truck operators, food trucks are constantly communicating with each other via, you know, a Slack app or, you know, Google Groups message board. And what we’re seeing a lot of is, “Hey, does anybody have a cashier for this weekend? Hey, can someone spare an employee for this shift?” So there’s a lot of sharing of employees, but the general consensus is there are not enough employees. And as a result, I mean, food trucks have really raised their pay. And even with that, they’re seeing it’s very, very hard, just like the rest of the food service industry.

Ryssdal: Are you making $15 an hour working on a food truck? Probably not, right?

Ryssdal: I’m not sure I had food trucks down as operating in a sort of a an interior communications ecosystem, right, the idea that they’re on a Slack thing to solve staffing challenges. It’s kind of interesting.

Geller: Yeah, I mean, you know, food trucks work great by themselves, but they work the best together. They’re constantly interacting with each other — “Hey, I’ve got this event. I need a desert truck.” Like. they’re competing, right? They’re also cooperating. 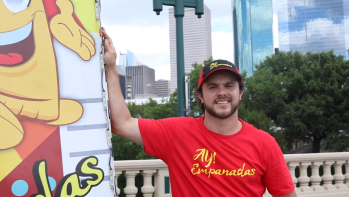