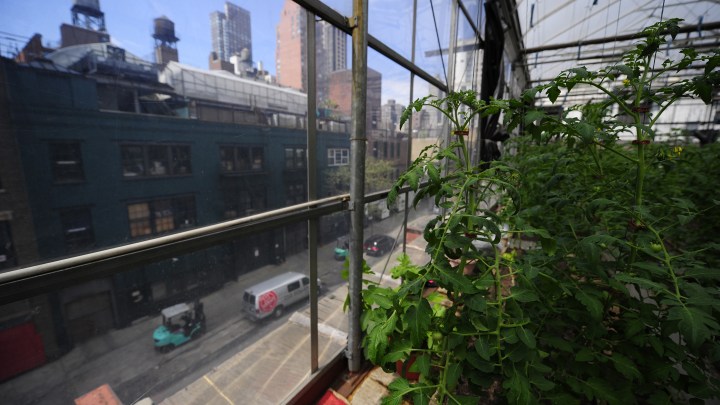 A Canadian winter may sound like a pretty unfriendly setting to grow fruits and vegetables, but it turns out you can get local tomatoes in February, even in Montreal, thanks to a growing urban greenhouse agriculture sector.

One company, Lufa Farms, installs its greenhouses on city rooftops. Lauren Rathmell and her husband created the company in 2011 to avoid having to ship produce across the continent.

Tomato vines towered over Rathmell’s head a few months ago in Lufa’s newest greenhouse, four stories off the ground, on a warehouse near Montreal’s airport.

While greenhouses require a lot of energy this far north, Rathmell said the rooftop locations can cut winter power needs in half.

“We benefit by just passively receiving the heat, rather than being on a cold ground level in wintertime,” she said.

Even without the shipping, it’s still pretty difficult to grow greenhouse produce in cold climates using less energy than outdoors.

Mark Lefsrud, professor of bioresource engineering at McGill University, said it’s challenging to produce fewer emissions growing in cold climates, even if you include the carbon footprint for transporting those fruits and vegetables across the continent.

But, he said, new investments in developing more efficient technology, coming from large, new firms and the commercial cannabis industry, are changing the equation.

“Once you’re into the Silicon Valley kind of funding people, then it opened up a lot of worlds,” he said.

And he said environmental pressures are also making local growers better able to compete on price with what’s grown out West.

“The big swings due to climate change, California wildfires, lack of water, etc., [mean] that these prices start to swing quite a bit,” he said.