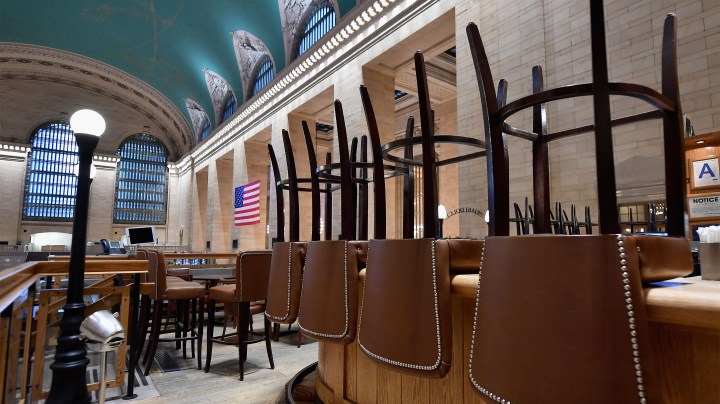 COPY
One expert estimates unemployment in the U.S. is around 14% currently. Angela Weiss/AFP via Getty Images
COVID-19

One expert estimates unemployment in the U.S. is around 14% currently. Angela Weiss/AFP via Getty Images
Listen Now

Since mid-March, it’s been 20 to 30 times higher than that — 16.9 million people have filed jobless claims since layoffs and shutdowns related to the COVID-19 pandemic started spreading nationwide. Nearly one out of 10 people who had a job to go to before the pandemic doesn’t have one now.

But it’s even worse than that, said economist Robert Frick at Navy Federal Credit Union.

Still more people likely won’t qualify for unemployment benefits: parents who have to stay home with school-age kids, people quarantined because they’re at high risk for COVID-19 and new graduates who can’t even look for work.

“I think we’re around 14% unemployment rate right now, plus or minus 2%,” Frick said.

How high could it go this summer?

“Twenty percent seems like a reasonable low end,” Frick said. “But the caveat here is it’s not 20% for years, we’re not talking about the Great Depression here. Twenty percent for two or three months, then things’ll start coming down.”

A better measure of the overall economic damage might be loss of household income. After all, that’s what all the layoffs and people on reduced hours and shuttered businesses means at the end of the day.

“Basically a third of income in the economy will fall in the second quarter — capital income and labor income,” said Kent Smetters, faculty director of the Penn Wharton Budget Model, which recently crunched the numbers on GDP and job loss.

One thing that might mitigate all that income and job loss is the hundreds of billions of dollars Congress has earmarked in its latest stimulus plan (the CARES Act) for loans to small businesses, so they can keep their employees on the payroll.

Randy Dellwo owns RBD Instruments, a company that makes scientific equipment in Bend, Oregon. Business is down 75% right now, but so far he’s managed to keep paying his 10 employees.

“We’re expecting that we’re not going to lose anybody, we’re going to be able to get through this OK, in part due to that SBA program,” he said.

Dellwo has applied to his bank for a forgivable SBA loan through the CARES Act’s Paycheck Protection Program to cover labor and operating expenses for a few months. He says orders are actually starting to pick up again from South Korea and China, where the pandemic appears to be waning.