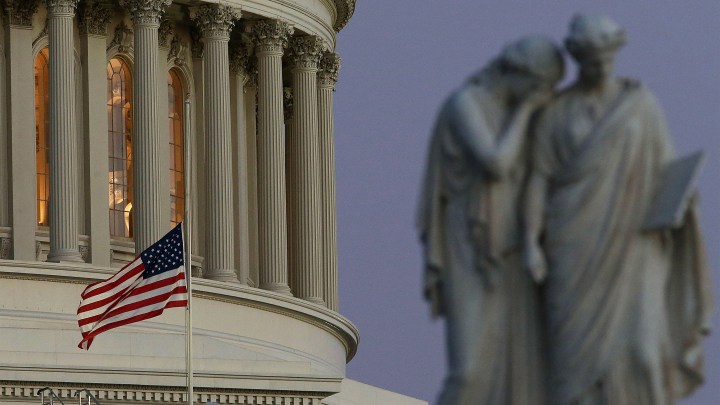 Eventually, she found her passion for politics. She enjoyed being able to mold policy and the ability to enact economic change. But political campaigns weren’t always a stable source of income for Jean-Pierre. She had to rethink and rework how she lived her life in order to financially survive. In order to follow her career, she took on debt and lived in run-down apartments in unsafe neighborhoods, far from the nice areas where her co-workers lived.

Now, Jean-Pierre is a chief public affairs officer for MoveOn, a public policy advocacy group and political action committee; a political analyst at MSNBC; and a member of the School of International and Public Affairs at Columbia University.

She sat down with “Marketplace Morning Report” host David Brancaccio to talk about her new political memoir, “Moving Forward: A Story of Hope, Hard Work, and the Promise of America.” The following is an edited transcript of their conversation:

David Brancaccio: Your plan, at least your parents’ plan, was for you to become a doctor, Karine. But after a crisis with that, you found this other calling: politics. The thing about that other calling, though, is the practitioners, at the level that you entered, that’s not secure a job that pays a lot.

Karine Jean-Pierre: No, it is not a secure job that pays a lot. Look, when I came to this country, my parents, like many immigrants, are looking for a better life. And in their minds for their children, the way that they saw success is they wanted me to become a doctor, a lawyer, or engineer, that is what they perceived as success. So my trajectory was [I was] supposed to be a doctor. And so, like you mentioned, it didn’t work out, you know, I had to face some tragedies in my own life, in my own trajectory. And down the road, a couple of years later, I decided to go into politics, which they were horrified by. For them, growing up in a dictatorship, politics was a no-no. And they were very afraid that was the the path that I was taking.

Brancaccio: This path would eventually lead you to work to help to get President Obama elected in 2012. But you worked in some campaigns where candidates spectacularly flamed out; John Edwards, who ran for president, Anthony Weiner in New York. I mean, how did you manage the financial risk of these tenuous jobs and campaigns?

Jean-Pierre: It is, it was tough. Coming from a working-class family, not having a lot of money, it’s hard to get into politics because it’s known for being for young people who come from financial wealth. So, I primarily ran up credit cards. You know, I had to pay back bills, my student loans, and so that didn’t go very well for some time. I think a lot of it, too, is while some of my colleagues were living in much nicer, one-bedroom apartments that were closer to the campaign office in a safe area, I was getting an apartment that was half the price in a shady area, just to save money. You rethink how you live your life. And you rethink where you can live and what you’re paying for. And it is a financial burden for many.

Brancaccio: I mean, this theme that’s emerging here, in this conversation of economic inequality. It’s something that you really take on in the book, you write that you, quote: “… believe that the growing economic inequality between the 1% and everyone else is an existential threat to the survival of the country that you love deeply.” I mean, it’s interesting, you can find people on both the left and the right who would agree with that. Do you think politics, as it’s currently constructed, is equipped to take on that big one?

Jean-Pierre: I hope it is. I mean, that’s that’s the thing you … especially in this presidential 2020 election … you look at the candidates that we have in the primary, and some of them are talking about big, bold ideas. I think many of them are trying to figure out how to get out of the situation that they are in. Like, even though I’ve succeeded, my parents still live check to check. And, if you think about it, immigrants contribute more in tax revenue than they take in in government benefits. You know, they are really a big part of the economy. And I always say, and I think I write about this in my book, my immigrant working family, they are going through the same kind of needs as any other working-class American family. I think we are in a place where we can take this on in a real way. Where you see that divide, there’s policies and ways to fix that. And we just need to make sure we hold our candidate, whoever’s the nominee, we make sure that if they win, that we hold them accountable.

Brancaccio: Even with all the big money that drives politics protecting the status quo? [Money] that has led to some of the things that you think are wrong here with the great gap between rich and poor.

Jean-Pierre: Yeah, I hear you. I think, I mean, part of my book is being hopeful and optimistic. And I’m thinking, as you’re saying, I’m thinking about the tax cut that came out of this administration, that really hurts the people that we’re talking about, everyday people, and that helps that 1%. I remember when I was, for the midterms in 2018, traveling across the country, helping candidates, in particular in red districts, and I remember people telling me like that their concern was the tax cuts and how much it hurt them. Many people when they file their taxes, they count on the funds that they’re going to get back from their tax returns. And many people didn’t see that.