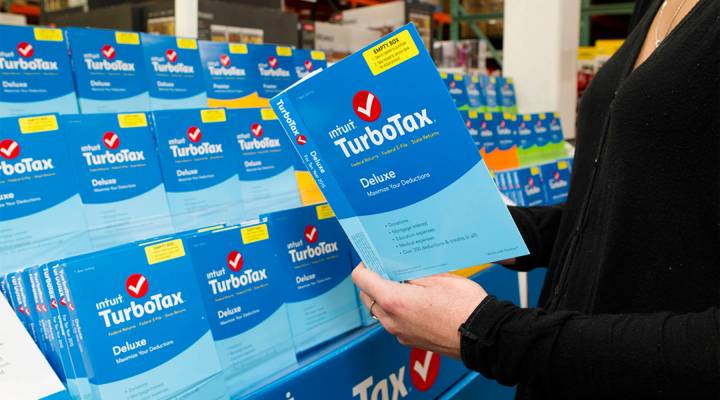 I was on the subway the other day in New York, and there was this ad. It was a woman, with her head in her hands, leaning on a pile of paper forms and manila folders, looking despondent. And it said: free tax prep.

This is how people think about taxes. And it starts early.

Courtney Poquette, who teaches personal finance at Winooski High School in Vermont, near Burlington, recently taught her students how to file their taxes using IRS forms like the 1040 and 1099. Not TurboTax or H&R Block.

They grumbled and groaned and said things like, “I hate taxes.”

“I think it’s just an instant reaction based off of the messaging that we have as a country about taxes being something that is so terrifying,” Poquette said.

You can fill out and submit the IRS tax forms on paper or on the IRS website. But most people don’t. According to the IRS, nearly 90% of U.S. taxpayers pay a professional or use software to file.

There are situations where that’s a no-brainer — if you own a business or have complicated investments, for instance. But for many taxpayers, that’s not the case.

“The irony here is that for lots of people, filing taxes is not complicated,” said Joe Thorndike, director of the Tax History Project at the publisher Tax Analysts. “If all you earn are wages, for the most part, then your tax return is really quite simple.”

You’re going to fill out more forms when you go to the doctor.

So why do so few people do their taxes on their own?

A big reason: fear. Many of us were never taught how to do our taxes. We don’t even know which forms apply to us.

“You’re just not sure whether you’re doing it right,” Thorndike said. “And on the far side of doing it wrong is potentially jail or at least some really bad fines.”

And that gets drilled into our heads: the IRS as this sort of boogeyman that’s going to come arrest you, garnish your wages, take your house.

“I don’t want to say like Big Brother, but kind of like they have like all this power,” said Julie Jaskierski, who lives in Chicago and uses tax software. “Like they’ll send their people after you or, like, I don’t know. But I’m afraid to mess up.”

The other kind of fear at play here: that you’ll leave money on the table. Maybe you don’t know about some deduction that could get you a bigger refund, but tax software or an accountant does.

And while there are some free tax prep options, there are limitations.

Julianna Hansen, who lives in Maine, realized that recently. She was using a free version of TurboTax when it told her she qualified for a $200 tax credit. One catch, though — she’d need to upgrade to the $40 version of the software to get it.

“They were like waving it in front of my face, but like, mmm, you have to pay us now, which felt really rude.”

Hansen could have gotten this credit on the IRS forms for free by making a few extra calculations. But she paid, because part of this is about convenience. Often it’s easier to pay someone else to be the expert.

Thorndike, at Tax Analysts, said he gets that. Even he uses TurboTax. But he thinks there is a bigger, societal cost when Americans don’t how to fill out a 1040 or what’s even on it — that they become sort of disconnected from the tax code.

“And the downside of that is that the tax system could use a lot of improvements, but it dulls our outrage in a way that makes those improvements less likely,” Thorndike said.

Poquette, the teacher in Vermont, wants her students to have the ability to file on their own. If someday they do use software or an accountant, they’ll know enough to double check their return.

For what it’s worth, she says her students warm up to the tax forms quickly.

“At first without learning anything about them, they seem kind of foreign and intense and a lot of reading and things like that,” said David Klinker, a freshman. “But after we actually had to learn about them, I realized they weren’t actually that complicated. You just need to take some time with it.”