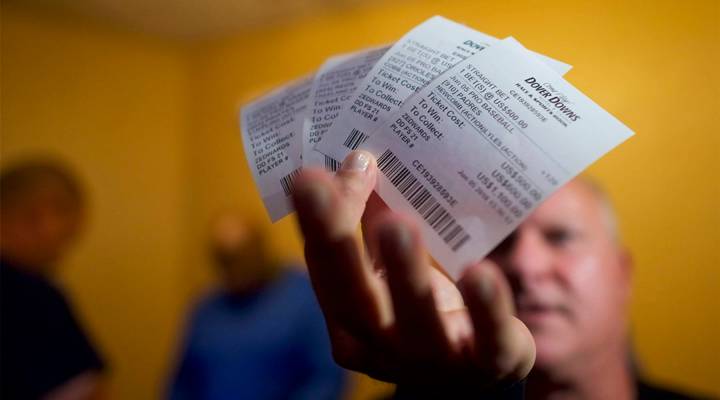 Sports Adviser Stuart Feiner, who was portrayed by actor Al Pacino in the film "Two for the Money," displays his betting tickets on Major League Baseball at Dover Downs Casino on June 5, 2018 in Dover, Delaware. Mark Makela/Getty Images
Listen Now

Without naming basketball tournament names, it’s safe to say there’s a lot of sports betting happening today. In the future it’s going to get a lot more … legal.

A Supreme Court decision last spring opened the doors for betting on sports in all states, not just Nevada. Now every state can make its own betting rules, and a handful have legalized it already. At least 20 states are considering new legislation, which is likely to lead to a lot more online gambling. And venture capitalists can smell opportunity.

Host Molly Wood talked with Paul Kedrosky, one of the VCs betting big. Kedrosky, who’s with SK Ventures, says he expects online gambling to evolve into a new investment ecosystem. The following is an edited transcript of their conversation.

Molly Wood: Starting with tools and platforms: do those already exist, to some extent? Is this sort of a FanDuel, DraftKings thing?

Paul Kedrosky: You can think about FanDuel and DraftKings, but think about them more specifically — about, I want to directly wager on, or somehow make a bet on, what’s going to happen in the NCAA, or some real world event.

Wood: OK. And then you’re also describing tools that would let sophisticated gamblers use data to make better bets?

Kedrosky: Right. The way this industry has evolved over time, and you used to see this back in the days of baseball almanacs, there was a whole tribe of people who shared and built giant complex spreadsheets that gave them an edge. Those things were highly proprietary and pretty idiosyncratic because it was just some dude with a beard, in his basement, doing this kind of stuff. Making that kind of information more widely available turns out to be something that people find pretty appealing, and [they] are willing to pay for it. Those sorts of data services are a pretty big deal.

Wood: I know that guy. That’s my dad.

Kedrosky: We all know that guy.

Wood: He’s going to be really annoyed that you’re trying to steal his spreadsheet. And then, this leads to an idea that there could become a new investment ecosystem around this.

Kedrosky: It’s definitely a pie in the sky thing, but it’s the thing that, weirdly enough, I feel most confident that’s going to happen in the longer run. If you think about it in index-fund terms, we don’t really have to be very good at picking stocks, because nobody really is, but I just make an allocation in my portfolio and say, “Put 60 percent of my money into index funds and hopefully that’ll all work out.” Imagine being able to carve off a small fraction of your portfolio and some of it goes into venture capital, or private equity, or whatever else. But some of it, in theory, could also go into sports betting.

The appeal of that is that sports betting, at least in theory, is uncorrelated. It doesn’t rise and fall with the S&P 500. Nothing changes in the NCAA Final Four based on what happened to Google in the stock market today. From an investor standpoint, that’s super appealing because uncorrelated investments offer you higher returns with a little less risk, as long as it’s mixed into a broad portfolio.

Wood: Right. All the people who are currently invested in rare wines and classic cars and art might think that this is way easier, because you could have a Chrome extension to then just bet on the Final Four.

Kedrosky: Right, and that’s a perfect example. The thinking is, “I don’t want to do it myself, but I’m told there are people out there who are good at this sort of thing, and not all of them are bearded dudes in their basements.”

Kedrosky: Yeah, I didn’t want to say that though.

Wood: It’s cool, we all know. With the caveat that it could all not work out, how big an opportunity could this present, do you think? How excited are investors about this?

Kedrosky: Honestly, not as excited as they should be. Because I think, in the U.S. in particular, people have been a little bit slow to realize the size of this marketplace outside of the U.S. It’s about a $40 billion market in terms of online gaming, specifically, out of a global market that’s probably a quarter of a trillion [dollars] in all forms of gaming. It’s by far the fastest growing segment of that gaming marketplace. The U.S. is the fastest-growing sub-market in sports gaming, so the opportunity is kind of monstrous. Yet, for whatever reasons, people have been very slow to pick that up.

Wood: Do you think it’s the sort of weird puritanical American thing that is keeping investors away from this?

Kedrosky: I think it’s a huge part of it, for better or for worse. Armchair diagnosis here, but that constantly comes up in conversation. There’s no question that the U.S. is an anomaly. I think it has a lot to do with path dependency, how we got to where we are.

Like any good venture capitalist, Kedrosky did acknowledge that these bets might not pay off at all. So far, despite the market potential, the returns for states that did hurry up and legalize sports betting have been pretty disappointing. The Associated Press reported last week that in the six states that rushed to legalize betting before the Super Bowl, four of them pulled in a lot less tax revenue than they expected. Rhode Island had apparently budgeted for about a million dollars a month in revenue by taxing gambling proceeds at 51 percent. But, according to the AP, from November to February the state pulled in more like $50,000 a month, and lost a bundle on the Super Bowl because, surprise, the New England Patriots won.

But one part of those shortfalls actually boosts Kedrosky’s case. The states that didn’t make as much money as they expected didn’t authorize online and mobile betting. In New Jersey, the state legalized betting with mobile phone apps from July through February, says the AP. It brought in $1.8 million a month.

You know who else wants to make some money off sports betting? Professional sports leagues. Bloomberg also had a story last week about the so-called “integrity fee” that the NBA and MLB have been asking for. It’s a slice of all the legal bets placed on their games. The leagues commissioned a study from Spectrum Gaming Group that says that the royalty fee would mean the leagues would be more likely to cooperate with states that legalize sports betting. That could push the gambling revenue higher by billions of dollars.