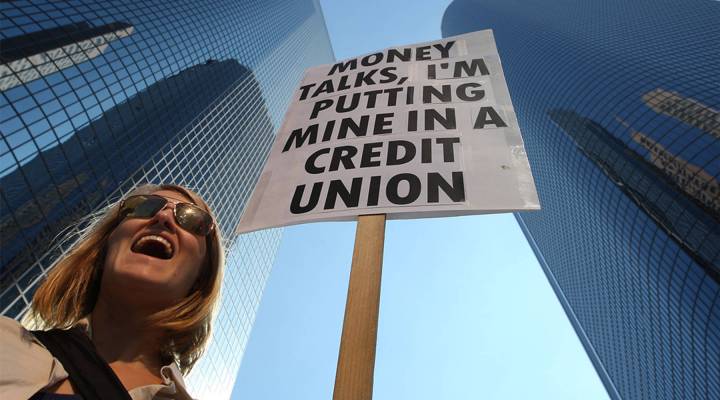 COPY
At the Move Your Money March in the downtown Los Angeles financial district in 2011, Occupy movement members called for people to move their money from banks to credit unions. David McNew/Getty Images

At the Move Your Money March in the downtown Los Angeles financial district in 2011, Occupy movement members called for people to move their money from banks to credit unions. David McNew/Getty Images
Listen Now

Credit unions are only supposed to serve certain communities, but the federal government has made membership restrictions a lot looser than they used to be, and that’s helped credit union membership shoot up by almost 60 percent over the past 20 years.

Banks are crying foul. The two sides have fought about this on Capitol Hill and in U.S. District Court. Soon, they’ll meet in the U.S. Court of Appeals for the District of Columbia Circuit.

You can get a sense of how easy it is to join a credit union these days through three people Marketplace met up with at a cafe in College Park, Maryland.

Ayla Hurley joined the Navy Federal Credit Union about five years ago. Hurley works in information technology. She’s not in the Navy. But her roommate had family in the military and belonged to Navy Federal. And if you’re living with a member, you can join, too.

Hurley said she remembers thinking, “’That’s it? OK, great!’ It was very surprising how easy it was.”

A year later Hurley got a new roommate, Sterling Huber, who also was not in the military and also wanted to join Navy Federal. He just had to type in Hurley’s account number.

“That’s the one I’m connected to — roommate — and that was it,” Huber explained.

Then Huber asked his friend, software engineer Matt Lindsay, to move in. And Lindsay wanted to join Navy Federal, too.

“I had no idea how many layers deep we were by the time I actually got to sign up for Navy Federal,” Lindsay said.

Daisy chains like this one are a relatively new phenomenon. In the past, to join a credit union, you had to work for a particular company. First Congress, then federal regulators made joining easier. They wanted to make credit union benefits available to more people.

Credit unions save their members around $12 billion a year, according to the Credit Union National Association, an industry trade group. Its chief lobbyist, Ryan Donovan, said that’s “through lower fees on products, lower interest rates charged on loan products, higher returns on savings.”

Credit unions can afford to do that because they don’t pay federal income taxes. They’re nonprofits and restricted to serving their members. Donovan said half the mortgages credit unions issue go to middle- or low-income families.

Credit unions are small, not giving JPMorgan Chase anything to worry about. But they do compete with smaller community banks like Sound Community Bank in Seattle. CEO Laurie Stewart said credit union loan rates are as much as a percentage point lower than what she can offer.

“I’ve had customers call me, and I’ve had to say to that client, ‘If you can get that rate and term, take it,’” she said.

Ironically, Sound Community Bank used to be a credit union for grocery store workers before membership rules were loosened. It became a bank because its membership was drying up. Stewart said if the limits were as loose then as they are now, she would have taken advantage of them, and her bank would have remained a credit union.

“We’d a put a sign out and said, ‘Come in the door. Come and get a mortgage loan. Let me help you, small business,'” she explained.

The last member of the Navy Federal membership daisy chain, Matt Lindsay, said he’ll get his girlfriend to join. He said the process she’ll go through seems like a ridiculous formality at this point.

“It was so easy, it makes me wonder why they even bother anymore,” he said. “Like, why do we have to do any step of this process other than saying, ‘I want to be in your credit union.’”

The banks would like the process to be harder for people like Lindsay and his girlfriend. That’s one of the points the banks’ lawyers will make when they face off against the credit unions in federal appeals court later this month.