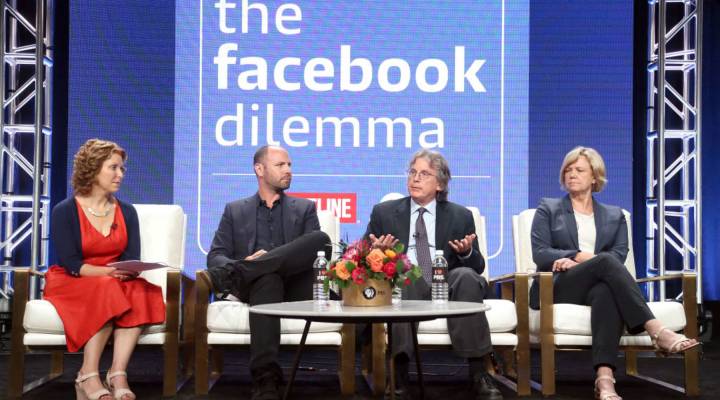 How does misinformation on Facebook affect democracy here in America, not to mention the social fabric of many other countries, from India to the Philippines to Myanmar? That’s the topic of a two-part Frontline documentary called “The Facebook Dilemma,” airing this week on PBS stations. It explores Facebook’s growth and how it has responded to warnings that it can be used for propaganda, violence and propping up authoritarian regimes.

Molly Wood talked with James Jacoby, a producer of the documentary. He started the conversation by saying Facebook’s role in the Arab Spring uprisings was thought by many to be wholly good. But that didn’t last for long. The following is a clip from the documentary and an edited transcript of their interview.

James Jacoby: A former employee who actually worked in the Middle East as an ambassador for Facebook was saying that those sorts of anecdotes about rumors spreading in places like Egypt in 2011 didn’t really cause any alarm to go off at headquarters. Because they took on this idea of not being really responsible for what was going on on the platform. And I think that they didn’t really want to invest, or didn’t have the resources at the time to invest, in really looking at what some of the downsides were.

Molly Wood: The Facebook executives you talked to had one pretty consistent talking point: They felt they were slow to respond to these problems. Do you feel like you came away understanding why Facebook was so slow to respond?

Jacoby: It was a combination of things. It was a combination of the true complexity of dealing with these types of problems. That’s what a lot of former employees are saying about it. What do you do about misinformation? What do you do about the ability of rumors to spread? How do you do that at a scale of 2.2 billion people on your platform? These are all really new, really complicated problems. And they really did seem to think it was not their responsibility, which the viewer can decide whether that’s something that was an excuse, or something that if you think about taking on that responsibility, which they’re doing now, it’s something that we also need to contemplate. Because the more they try to solve these problems, in some ways, the more power they have over speech and over political discourse and over the information that a lot of people see on Facebook.

Wood: Yeah. One question that my Make Me Smart co-host Kai Ryssdal is fond of asking, which I think we’re all asking, is just the fundamental one: Does Facebook get it?

Jacoby: They like to say they get it. They like to say that they understand their responsibilities and they’re taking a broader view of their responsibilities. But I don’t actually think that they’re really reconsidering their fundamental business model. And some people might say, “What does it mean for them to get it?” And it may entail a real radical existential question there for them as to whether they actually are doing more harm than good.