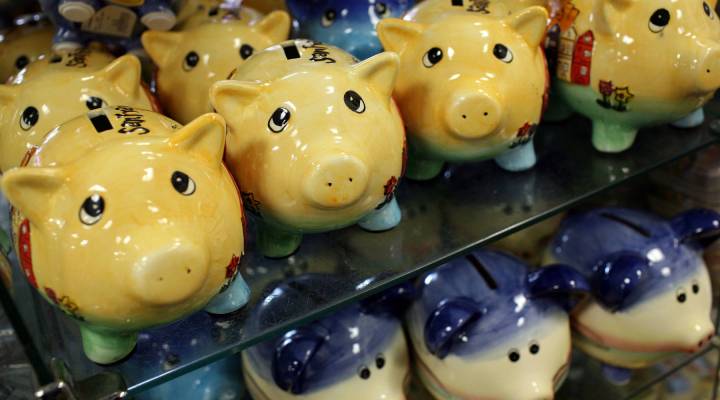 Who benefits when your money is sitting in some app instead of in your savings?  Justin Sullivan/Getty Images
I've Always Wondered ...

Who benefits when your money is sitting in some app instead of in your savings?  Justin Sullivan/Getty Images

What do services like Venmo or PayPal do with any balance that exists in my account? Do they lend it out? Do they invest it?

The answer to this question is hidden in plain sight. You know those long user agreements you probably skim over and then click agree whenever you download a new app? Well, turns out, these spell out exactly what mobile payment apps do with your money when you leave it sitting in your account.

“Any funds held in PayPal or Venmo are transferred to bank accounts in PayPal’s name,” he wrote in an email. “The balances are pooled and held separate from PayPal’s corporate funds, and the company never uses the funds for its operating expenses or any other corporate purposes. As outlined in our user agreements, PayPal owns the interest on the funds. PayPal complies with applicable state money transmitter laws pertaining to the funds.”

How much money are we talking about? About $18 billion, according to Eric Turner, financial technology research analyst at S&P Global. When PayPal announced its quarterly earning at the end of January, it said that ending in December the company has about $18.2 billion in “funds receivable and customer accounts.”

“A lot of people have this theory that if they were investing this money they could be making a lot off the interest or lending it out, but it’s short-term money,” said Turner. “They keep it pretty liquid because you really never know when someone’s going to need it.”

One of the reasons that most users do not keep their money in the apps for long periods of time is that they do not offer the same protections as bank accounts.

“When you and I go to say Chase or Wells Fargo, they are FDIC insured,” said Michael Moeser, director of payments practice at Javelin Strategy and Research. “If the bank goes under — and we had that in the last recession — if the bank makes some bad loans and they can’t cover the value of the deposits, the Federal Deposit Insurance Corporation comes in and they provide insurance that will reimburse you for the loss of up to $250,000.”

At the time of the interview, Moeser had $3 balance in his PayPal account and $500 balance in Venmo.

“Unfortunately, I do have $500 in Venmo because I send money to other people and increasingly you can buy things with Venmo,” he said. “That’s clearly the path that they’re going, but what they do with that money is really up to them.”

While the interest the company makes on that money is nothing to sneeze at, that is not where PayPal or Venmo hope to make most of their revenue. Users and their money are just means to an end. The apps really start to make money once they establish themselves as a trusted and widely-used mobile payment app and are then able to convince retailers to use its platform and pay fees on each transaction. And as Moeser pointed out, Venmo is doing just that.

“Venmo may make some money off of what you have but largely the sending back and forth has been for you and me,” said Moeser. “Me sending you money and you sending me money basically cost them money and that was to create the network of millions of consumers.“

“When they went to retailers to say: ‘Hey, we have a better solution. We’ll charge you less than credit card companies. And we have millions and millions of users that transact billions of dollars every year. We are a force in the industry.’ And the retailers have signed up or are in the process of signing up,” said Moeser.

“The amount that they could make off of interest on the amount people are keeping in the app doesn’t mattered as much as actually getting people to use the app at a merchant,” echoed Turner. “The merchant fee is about 2.9 to 3 percent.”

According to Square, a mobile payment platform for businesses, merchants pay credit card processing fees that are between 2.87 percent and 4.35 percent per transaction. When Venmo first introduced its pay function at different retailers in 2016, it said merchants would be charged 2.9 percent of the transaction amount plus 30 cents per transaction.

So while Venmo needs your money to succeed, it does not need it to invest it. It needs you to keep spending, preferably at its partner businesses.