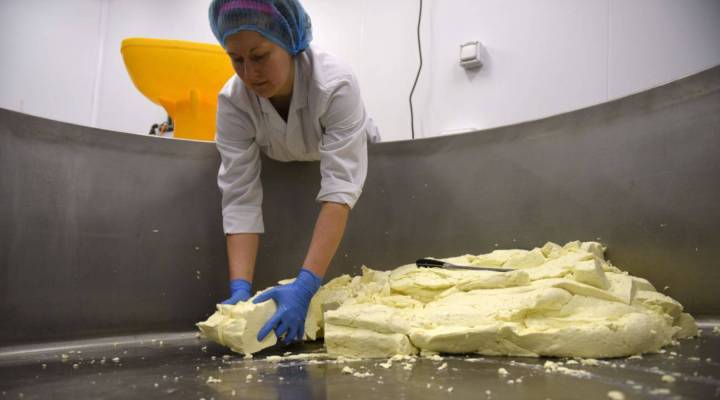 Dominic Coyte knows this to his cost. Coyte runs the Borough Cheese Co. in London, which imports and retails a range of French and other continental European cheeses. He describes Brexit as “a disaster.”

“Since the referendum result, the pound has sunk against the euro, and that’s forced us to put up our prices. In October last year, we put up our prices by 15 percent.” he told Marketplace.

Given the uncertainty, further sharp falls in the pound are possible, pushing up his prices further, and if Britain fails to secure a trade deal with Europe, there could be hefty tariffs too, putting some European cheeses beyond the reach of all but the wealthy in Britain.

“You have to think that’s possible, given the prices we’re looking at. I have to wonder whether my business would survive in those circumstances,” he said.

Much of that $3.5 billion worth of cheese a year that the Brits eat comes from continental Europe. That’s prompted some to suggest that unless there’s a trade deal with the EU after Brexit, Britain’s cheese industry could be in serious trouble, with soaring prices and shortages.

“Physically moving cheese — or other fresh produce — across our borders will be much more difficult,” said Andrew Opie of the British Retail Consortium, a trade association. “There’ll be more checks, they’ll be held at the borders. They’re often fresh products that cannot be delayed at the borders, otherwise they will spoil and won’t end up on our shelves. Going forward, we could see gaps on our supermarket shelves.”

It’s not all doom and gloom in the British cheese business, however. Upscale exporters, like Neal’s Yard Dairy, are so far better off, thanks to Brexit. Sales director Jason Hinds concedes that the fall in the pound has been good for his business.

“The currency has worked in our favor, and, it has to be said, in the short term, it’s helped our sales. There’s no question about that,” he said.

But he’s no fan of Brexit. Most of his exports are shipped via the world’s largest wholesale food market in France. So what happens if there’s no trade deal with the EU after Brexit?

“What it will require, for sure, is more paperwork, more bureaucracy, more time, more cost. I would definitely rather not have Brexit,” Hinds said.

One sector of the British cheese industry would benefit from a “no-deal” Brexit, however — the cheesemakers.

Philip Wilton is a genial, former management consultant who was laid off five years ago. He set up Wildes Cheese, an urban cheesemaking firm, in north London.  He said that the business is thriving, and if imported cheeses become even more expensive, he expects to do even better.

But Wilton has misgivings about Brexit, too. He’s making a premium product and worries about its affordability if the whole British economy tanks because of a disorderly exit from the European Union.

“We are not cheap, tatty, rubbish makers. We’re proper cheesemakers, and our real worry is that if the U.K. engine falters, if people are having to pay 5 pounds (about $6.50) for a cauliflower, that will have a negative impact on our business,” he said.

He wants to invest in and expand his cheesemaking enterprise but dare not because of the uncertainty — a further sign of the fermenting discontent over Brexit.