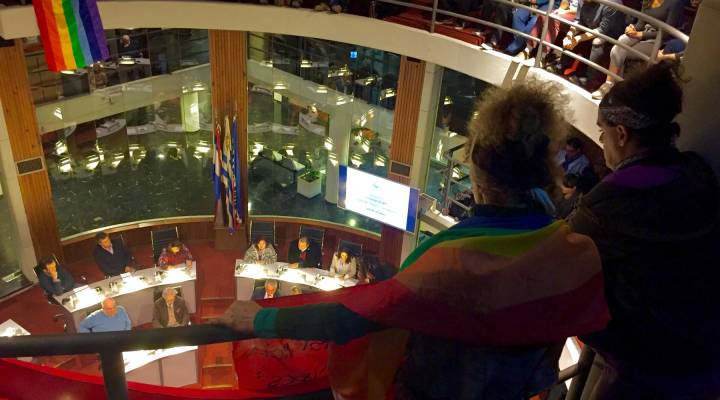 Updated on Oct. 22, 2018: The Uruguayan general assembly approved the proposal with 62 votes in favor on Oct. 19, 2018. The bill sets aside 1 percent of government jobs for the transgender community, creates scholarships, and a fund to pay economic reparations to transgender people born before 1975 who were victimized by the government.

Sandra Valin, who is transgender, was born in 1974 and said growing up in Uruguay, her mom wouldn’t allow her to leave home alone.

“When I was a kid I was a target because I was flamboyant and feminine, it was horrible, and it didn’t end with the dictatorship – the persecution continued into the 1990s,” Valin said.

Uruguayan state persecution of transgender people has had a devastating effect on the trans community. That admission is part of  a package of bills drafted by the executive branch of the Uruguayan government with the express purpose of improving the lives of trans people.

In 2016, a government census  found that 873 Uruguayans identify as transgender. The census also found that 75 percent of the trans population didn’t finish high school and that a quarter are cut off from family relations.

“Trans people don’t reach old age,” said Tania Ramirez, who works for the Ministry of Social Development in Uruguay. “They are a vulnerable community and the police and the state detained and tortured trans people during the dictatorship of the 1970s and 80s and these tactics continued into the democratic era.”

Now the Uruguayan government is looking at a proposal to make amends.

The general assembly is currently reviewing a proposal that will create scholarships, set up affirmative action, and allow people to change their name and sex on official documents without approval from a judge.

It would also create a monthly pension for transgender people born before 1975 – as a way to make reparations for those who were targeted by the government.

Valin would be eligible for those reparations. Things are easier for her now – she lives in a wealthy neighborhood and walks dogs for a living.

“I am the pet sitter, it’s so funny because I work from the beach,” said Valin. “I love my job.”

But she can’t walk dogs forever and she doesn’t have a stable pension to look forward to – she says that government subsidy would really help.