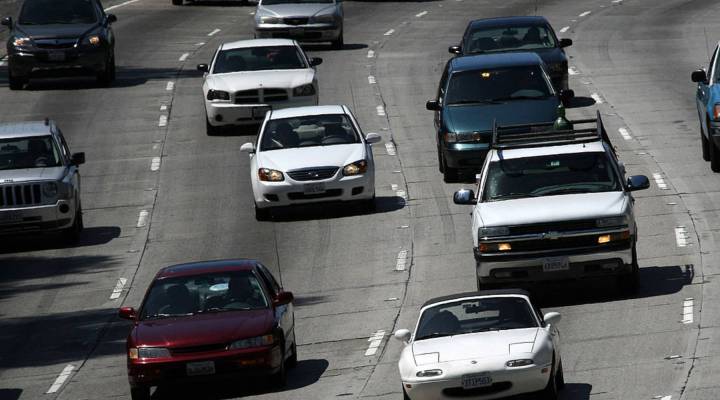 California is holding its ground on tough fuel efficiency requirements for vehicles sold there, in direct opposition to President Trump ordering a review of federal standards, which would likely roll back requirements for carmakers.

But politics weren’t at the forefront of anyone’s mind at Honda of the Desert outside of Palm Springs this Memorial Day weekend. It’s a major event for car dealers, complete with those crazy inflatable guys by the highway and big balloons. California is the largest market for cars in the U.S.

Kelly Baderos and her husband said they were there shopping for a new car based on price but also on its impact.

“Being environmentally aware of the emissions and what you’re doing there,” she said. “I think that’s more of a big deal in what people are also looking for now, rather than just the gas mileage.”

She knows any car they buy in California will be at the forefront of pollution control. Since the early 2000s, California has led the nation on car emissions, with 13 other states and Washington D.C. signing onto its standards. Everyone assumed stricter federal rules were coming, so adopting California’s code seemed an easy way to comply.

But one of President Trump’s first executive orders mandated a review of national fuel economy standards, something auto manufacturers pushed to make happen.

“The industry has opened a can of worms a little bit, by pushing back on a process that was underway,” said Dave Cooke, senior vehicles analyst with the Union of Concerned Scientists.

He said big car companies stand to benefit from the rollback, because it takes away the pressure to fast-track expensive fuel efficiency technology. But the companies that supply auto parts to the carmakers are in a bit of limbo. Ann Wilson, senior vice president of government affairs for the Motor & Equipment Manufacturers Association, said what her members are looking for is regulatory certainty.

“We have to make sure that we are looking to the future in a sure sight of what’s to come,” she said.

Better fuel efficiency mostly hinges on a few key auto parts like tailpipes and drive train technology, which are made by third-party suppliers.

Right now car makers sell different versions of the same vehicle: one that meets California standards, and another one — that’s cheaper to make — that doesn’t. Cooke said the disparity between those two models could grow.

“Maybe an expensive, highly efficient option might only be sold in California,” he said.

With California insisting it won’t budge, and no revision of federal rules completed for at least a year, it seems that there’s no merging of fuel standards in sight.