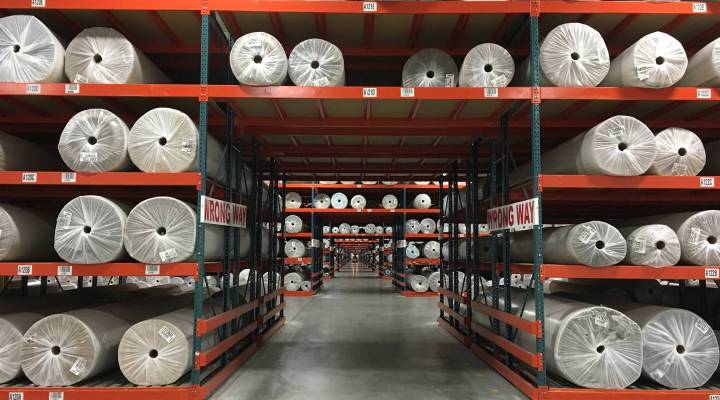 COPY
Workers at Engineered Floors in Dalton, Georgia, call this "the tunnel," because you can't see from end to end of the stacks of finished rolls of carpet. Eliza Mills/Marketplace

Workers at Engineered Floors in Dalton, Georgia, call this "the tunnel," because you can't see from end to end of the stacks of finished rolls of carpet. Eliza Mills/Marketplace
Listen Now

Editor’s note: Over the past couple years, we’ve talked to the mayors of three different cities: Dalton, Georgia; Gillette, Wyoming; and Corvallis, Oregon. They’re all different places with different people, economies and politics. We spoke to each mayor right before the election, and now we’re checking in with these cities by visiting each place. First up is Dalton, Georgia.

If you’re standing on carpet, right now, there’s a good chance it was made in Dalton, Georgia.

When you pull into town, you see a big sign declaring it the “carpet capital of the world.” Steam from the plants streaks up into the sky. Huge warehouses run alongside roads and rail tracks. You know you’re in a manufacturing city.

But downtown has this intimate red-brick feel. It’s almost stereotypically cute — right down to the Oakwood Cafe where everyone is a regular. The diner’s owner, Kasey Carpenter, seems to know them all.

Housed in a brick-exterior building, Oakwood Cafe is the staple neighborhood spot in downtown Dalton.

“That’s my kid’s pre-K teacher. That lady works at the bank,” he pointed out. Carpenter grew up here, and runs a bunch of businesses. He just gets Dalton.

“I made the analogy that it’s much like Detroit,” Carpenter said. “Your customers get their paycheck from the carpet mills. Carpet mills are doing bad, everyone’s doing bad, that’s just how it is.”

Dalton took a huge hit during the recession. When the housing market collapsed, carpet went right down with it. In March of 2009, the unemployment rate here was over 13 percent. Recovering from that meant changing what the city makes and how the carpet business is run. The change has meant more diversified and recession-proof products, and a smarter, leaner process with more technology and automation. And that includes growing the next generation of skilled workers.

Shaw Industries is one of the biggest flooring companies in the country. The company, owned by Warren Buffett’s Berkshire Hathaway, actually started a middle school summer camp to help cultivate a young workforce through education. Brian Cooksey, the director of operations training and development at Shaw Industries, said the positions he needs to fill are not the manufacturing jobs of the ’80s and ’90s that many of these kids’ parents had. The company discovered this when it first started talking to 7th and 8th graders.

“When you said, ‘Do you want to be an engineer?’ we realized that most of these students thought that was a train conductor, and so we had to talk about what does, really, an engineer do,” he said.

For the summer camp, the company brings in working engineers who can talk to students about things like 3-D design and electronic circuit boards.

The floor of the Shaw factory perfectly captures the transition between old and new. There are massive multistory machines that run molten plastic through a series of sieves to create fibers. Those fibers will become yarn, which will eventually become carpet.

It looks and sounds a lot like a typical factory, and there are still a lot of people on the floor keeping the machines running. But there are some clear signs of the future. Like Larry, Moe and Curly — the huge laser-controlled robots that drive around the floor moving products.

The future of manufacturing is more pronounced at the nearby Engineered Floors plant. It’s a much smaller company than Shaw and is one of the newest, higher tech plants in Dalton. Engineered Floors executive James Lesslie took us on a golf cart tour.

“This is a very, very large facility. It’s probably the largest one that we know of for carpet,” he said.

To get a sense of the size of the plant, picture the scene from “Raiders of the Lost Ark,” where they were driving through the warehouse where everything is stacked up — except everything is yarn. Huge rolls of carpet are stacked all the way to the ceiling. Everything is astonishingly clean, bright and orderly. There are computer stations sprinkled between the machines. And then a few people who keep things running, including Guadalupe Guido, 23.

“I have had a lot of opportunities with the company. Moving up pretty quick, and I don’t feel like I’m going to stop no time soon,” she said.

Guido said she’s moved up several times — driving a forklift, working as a production clerk, and now she’s a tufting scheduler. Essentially, she is programming the final steps in the carpet process. Guido makes $15.50 an hour, up from $11 when she started.

Her entire family works in the carpet mills. Guido’s parents came from Mexico to work here. Initially, they didn’t want her to follow in their footsteps with a factory job. But, again, these are not those jobs anymore.

“Everything is computer-based now,” she said. “So there is a lot of things that we have to learn computer-based, but it’s always a good thing to learn about technology and knowing new stuff.”

When she was younger, Guido thought about being a lawyer. But now she makes her own money, goes to one of the local colleges at night and will get a bachelor’s degree in human resource management this spring. She said she wants to run a plant like this one day.

Guido is part of Dalton’s big Latino population, which makes up 48 percent of the city. Those demographics make for some complicated politics in an area that voted largely for President Donald Trump.

Mayor Dennis Mock, who has been in office for about two years, has a background in business, not politics. He still works for his family’s produce company most mornings before heading to city hall. He said he supported Trump because he was tired of establishment politics.

“For me personally, and I think for a lot of other folks, he’s actually made some strides and made some steps that we all felt like needed to be done,” he said.

He likes the idea of a businessman in the White House and fewer regulations. But Trump’s rhetoric on immigration has caused trouble, especially for undocumented residents here, who are afraid a trip to jail for a minor offense could mean they’d get deported. Dalton is five minutes from the Whitfield County Detention Center, which works closely with Immigration and Customs Enforcement.

Mock said part of his job is working to be the mayor of everybody living in Dalton. When asked what kind of city he wants for the future, he drove us out to a reservoir that’s being developed as a recreation area. It’s nestled between two mountain ranges and surrounded by trees. You can hear whip-poor-wills.

This is where Mock wants to see people taking walks and fishing, local schools holding nature studies classes or college rowing teams out practicing. It’s part of his strategy to create a 21st century Dalton that will appeal to any company that might bring good jobs to town.

“I consider this economic development,” Mock said. “When we have companies that come here and want to know what their families can do and what their employees can do for entertainment, this will be one of them.”

In a few years, he hopes this place will be full of people who work in the city, live and play in the nature around it, and have modern manufacturing jobs that give them a good life.