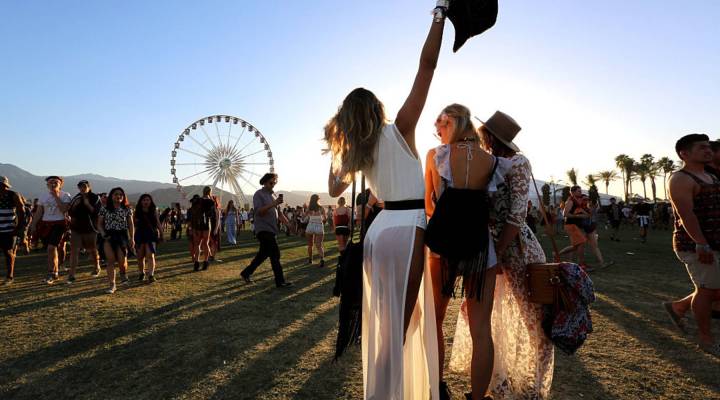 A big music festival kicks off in New York City this weekend. The Governors Ball is featuring big stars like Kanye West, bands like The Strokes — they’re all coming to Randalls’ Island in the East River for a few days of partying. The event is going to be big business — just like most of the other 800 or so music festivals that have sprung up in recent years all over the U.S.

Jess Silberstein is one of them. She works in entertainment in Atlanta. At 30, she’s been going to festivals for half her life. She said there’s something different about a festival than a concert — the way the experience draws her together with other attendees. A few years ago she went to Lollapalooza in Chicago.

“And Arcade Fire was the headliner,” she said. “And there was just this moment at the end, it was the last night of the festival, and they played “Wake Up,” and you have 30,000 people all singing this song together, and it just, I don’t know, it gave me chills.”

She’s taking in three festivals this year and crossing the country for one of them.

Don Gorder chairs the music business and management department at Berklee College of Music. He said the sheer number of people makes festivals lucrative for the organizers – and others.

“The sponsors love it because it gives great visibility,” he said. “They position themselves well with their banners and their product placements and sponsoring the meet and greets and that kind of thing.”

They often have that captive audience for a couple of days. But festivals don’t only help those directly involved.

Meighan Bier lives in Chicago and owns an apartment she rents on AirBnB. When Lollapalooza comes around, her place is in hot demand.

“I will book same day, within an hour of ticket sales,” she said. And she usually decides to up her price, “just to take advantage of it a little bit,” she said. She’ll charge 25 to 50 percent more. After all, she has to make up for that unmarketable Chicago winter.