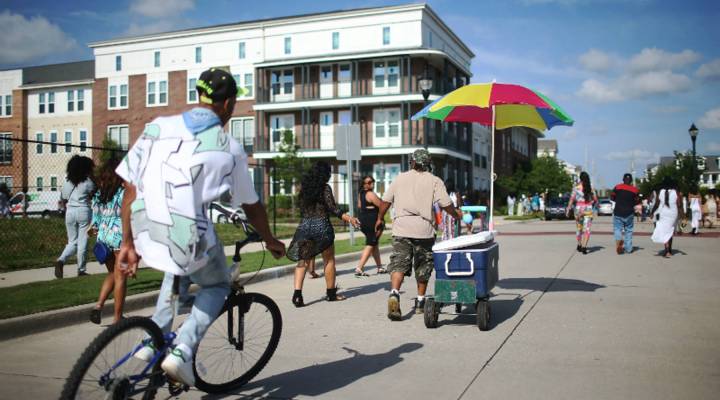 COPY
The former St. Bernard housing project, which was flooded during Hurricane Katrina, has been replaced by Columbia Parc at the Bayou District. Mario Tama/Getty Images
10 years after Katrina

The former St. Bernard housing project, which was flooded during Hurricane Katrina, has been replaced by Columbia Parc at the Bayou District. Mario Tama/Getty Images
Listen Now

The St. Bernard Development, a housing project, was a collection of low-rise brick homes in New Orleans’ Gentilly neighborhood. Around 900 families lived there before the flooding from Hurricane Katrina. Some former residents remember St. Bernard as a community where people worked hard and looked out for each other. Others, including many New Orleans residents who did not live in the project, say St. Bernard was violent and impoverished.

The New Orleans City Council voted in 2007 to demolish St. Bernard. The question was: What would replace it?

After Hurricane Katrina, a group of New Orleans business and community leaders formed a nonprofit organization called the Bayou District Foundation. The group’s stated mission is to implement community redevelopment models. It set its sights on redeveloping St. Bernard. The foundation took its cues from East Lake in Atlanta, a mixed-income community that replaced a housing project so violent, it had earned the nickname “Little Vietnam.” These days, East Lake is known as an Atlanta success story.

The development that replaced St. Bernard is called Columbia Parc at the Bayou District, and is widely known simply as Columbia Parc.

It boasts amenities like a fitness center, a movie theater, a swimming pool, large playing fields and beautiful homes. The streets outside of the development are rough with potholes.  The streets are glassy-smooth in Columbia Parc.

Residents’ children are offered free classes through Educare, a program that aims to prepare low-income children for school.

“[Educare,] to me, is the crown jewel of the whole development,” says J.T. Hannan, director of public affairs for the Bayou District Foundation.

“This is our way of assaulting multigenerational poverty. Children who come from low-income families typically receive no preschool. They start behind, they stay behind.”

Not children at Columbia Parc, which has a cradle to college education model and is currently gearing up for the construction of a K -8 school.

There are three types of renters at Columbia Parc. One-third are public housing tenants, who pay a third of their income, no matter what it is, in rent.

Another third, also low-income, pay a fixed amount that is below market rate. The final group have middle class jobs — police officers and professors — and pay market rate. The development also has some senior housing.

“Everybody is on the same lease,” he says. “Whether you make over six figures or you’re completely dependent on public subsidy. Every resident needs to adhere to three conditions.”

Those are: Adult residents must work at least 20 hours a week and have to pass a credit check. They must have a record that has been clean of felony convictions for at least seven years.

This means that some people, including some displaced former St. Bernard residents, can’t live in Columbia Parc.

Robert Lewis, 42, is one of those people. He still lives nearby and sometimes cuts through Columbia Parc on his bike to get to a nearby store. He was raised in the St. Bernard project and is angry that it was demolished.

“It’s messed up now that they tore it down and rebuilt it,” Lewis says. “And everybody that was living back here, ain’t back here. They’re all over.”

Lewis, who has a felony drug conviction, is one of those who can’t live here. He visits friends in Columbia Parc sometimes but he says he wouldn’t want to live here.

It’s too quiet, he says, too sterile. No one barbecues, no one hangs out. It’s not a community, like St. Bernard was.

Lewis is not alone in this view. For all of its critics, some of St. Bernard’s fiercest defenders are people who once lived there.

Lawrence Vale, a professor of urban design and planning at the Massachusetts Institute of Technology, has spent time interviewing residents of housing projects in cities across the country.

He says many express frustration that outsiders view projects only as impoverished and crime-ridden places.

Lewis will admit to liking one thing about the neighborhood improvements that Columbia Parc has engendered: a little skate park that was built under Interstate 610 where, he says, all the neighborhood kids hang out.

A scale model of the Columbia Parc development in New Orleans.

Jerome Lipscomb, 18, was headed to the skate park on a recent day. He lives in Columbia Parc with his grandmother. Like Lewis, he lived in St. Bernard before the flood, and like Lewis, he has some great memories of his time there. He remembers waking up on summer days and playing outside with his friends. Lipscomb says he resents St. Bernard’s demolition.

“That’s where I was born and raised,” Lipscomb says. “It was tragic. But I had to get over it. Life had to go on. [Columbia Parc] is quiet. It’s cleaner. But I prefer the old St. Bernard.”

Like many young people his age, Lipscomb is thinking a lot about what he’ll do after graduating from high school. He reels off a list of instruments that he plays in church and school: snare drum, bass drum, saxophone. He even picks up a little money playing in the French Quarter. He also plays baseball and is eyeing an athletic scholarship.

When asked to consider whether growing up in Columbia Parc will offer him a better life in the long run, Lipscomb says he thinks it will. He says, he was able to go on a college tour to the Naval Academy in Baltimore, which has partnered with the Bayou District Foundation. That wouldn’t have been an option at St. Bernard. And he says he has a mentor at Columbia Parc, a man named Terrell Haynes, who makes sure he stays on the straight and narrow.

Haynes is a social worker with a nonprofit called Kingsley House. He works on site at Columbia Parc, providing counseling to anyone who needs it, and he is astonished to learn that Jerome thinks of him as a mentor. He appreciates the young man’s compliment and says, that, in a nutshell is the argument for a mixed-income development.

“Growing up in St. Bernard, if you didn’t have a strong-knit family providing structure, you could easily succumb to the underground, criminal activity for lack of a better word,” Haynes says. “Him growing up in this environment, him being able to reach me – I mean, he has my cell phone number.”

Haynes, who is 47, remembers St. Bernard as a troubled place. He recalls dropping his high school teammates off in the evening and being urged, “Don’t stop at the red light. Just keep going.”

He has great expectations for the young man who spoke offhandedly of his musical and athletic abilities. He says Jerome has something more than ability: He has talent.

“If he’s not playing in the major leagues, he’s probably gonna be playing an instrument,” Haynes says, when asked what he sees in Jerome’s future. “I can see him being along the lines of a Wynton Marsalis or a Harry Connick  Jr. I mean, the guy is just that good. He’s just that good.”

Haynes kept in touch with some those old high school teammates who lived in St. Bernard. A few of them did very well. One played professional football.

But, he says, those guys were really the exception. If Columbia Parc’s model works, he says success for everyone (or at least, everyone who is lucky enough to live here) will be the rule.