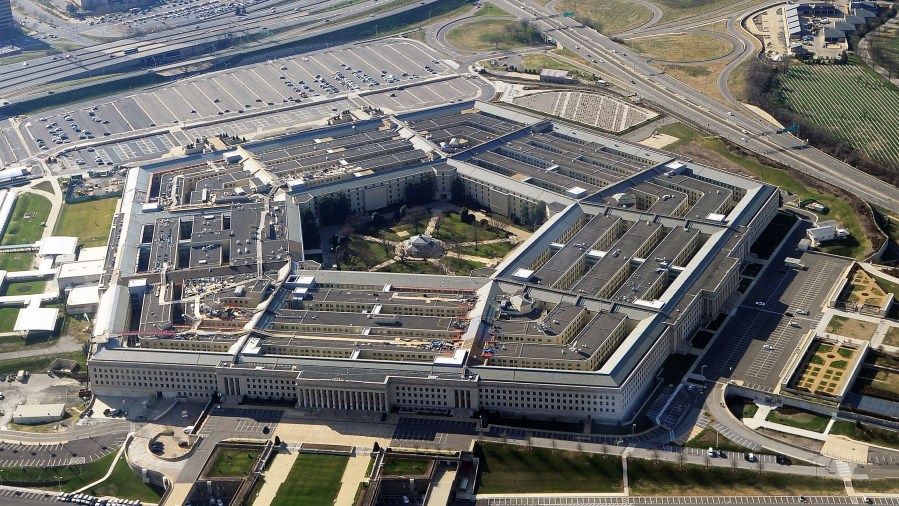 The Pentagon canceled its $10 billion contract with Microsoft after years of legal battles. The new contract will go to more than one company.
Listen Now

If you land a contract with the Department of Defense, that’s usually big money. Unless, of course, the government changes its mind.

That’s what happened to Microsoft this week, when the Pentagon canceled the Joint Enterprise Defense Infrastructure, or JEDI, cloud computing contract. The government controversially awarded that $10 billion contract to Microsoft in late 2019; Amazon immediately sued, saying former President Donald Trump exerted undue influence over the decision, which led to a long legal battle.

Marketplace’s Kimberly Adams and Molly Wood talked about it. The following is an edited transcript of their conversation.

Molly Wood: The Pentagon had been soliciting this big contract to hire a company to modernize its infrastructure to essentially provide more real-time information to warfighters out in the field, and essentially take the entire operation from a series of lots of different computers connected to various networks described as decaying to a modern infrastructure. It was a $10 billion, 10-year-long contract that has mostly created years of fighting and lobbying and drama between various tech companies, including Amazon, Microsoft (which ultimately won the contract), Oracle, IBM and a bunch of other smaller cloud providers.

Kimberly Adams: So then this week, the Department of Defense said that this contract “no longer meets its needs.” What does that mean?

Wood: That part is interesting. I would imagine that one thing that’s happening here is that this contract is still mired in litigation. Amazon sued over the outcome. Amazon has alleged that President Trump improperly interfered because of his animosity toward Jeff Bezos in the contract, and that resulted in it being awarded to Microsoft. The Pentagon did a review and said, “No, this is ultimately proper,” but Amazon has sued and that lawsuit is ongoing. So, it’s very possible that part of what happened here is that the Pentagon said, and maybe the Biden administration, we’re not sure, said, “This is never gonna get done at this rate, and we do actually need to modernize.”

But one other thing that might be going on here is that the Department of Defense’s note about this canceling of this contract says the technology has also evolved. And there have been concerns for a while among lawmakers and cybersecurity experts that having just one company provide all of the cloud infrastructure for the Department of Defense might not be the best way forward. So the Pentagon has signaled that they might be looking at a solution in the future that involves multiple companies and actually a different cloud technology that maybe wasn’t very mature when they first started this contract process years ago.

Adams: Right and this gets into how government contracting works. It’s a notoriously long process, and tech moves notoriously quickly.

Wood: Exactly, and there have, in fact, been all kinds of developments in cloud technology. It’s very likely that Microsoft’s technology progressed, even in the time of the contract, since it was launched at the time that it was awarded this deal. Now, cloud technology itself has evolved. Yes, that puts the Pentagon in a spot to maybe start over with a new five-year contract that could put them in exactly the same position five years from now.

Adams: So what happens next? Is it the end of the JEDI program?

Adams: As the government figures all this out, what is at stake in terms of national security?

Wood: The truth is, we don’t know, but we do know that the tech is old and they might need newer tech. That said, because the specification for the original JEDI cloud contract was so specific that only one or two companies could meet it at the time, only Amazon was capable of meeting. Even now, only Microsoft and Amazon are capable of meeting it. It does make you wonder if they were also sold on this off-the-shelf product that didn’t turn out to be the thing that the Pentagon needed after all.

The Pentagon specifically mentions Microsoft and Amazon are likely the only companies who can do the job. But Defense One, a national security publication, reports the department is also reaching out to companies that previously bid, like Google, Oracle and IBM.

Molly mentioned this contract as an example of the government asking tech firms for solutions that may not exist unless they are specifically designed. Waldo Jaquith — a technologist now at Georgetown University’s State Software Collaborative, but who previously worked for the Obama administration — has an interesting Twitter thread about how state governments solicit tech contracts. It’s not particularly efficient.

And the new Defense contract will be for the Joint Warfighter Cloud Capability project, or JWCC. Rolls right off the tongue. So we want to hear your nerdy nominations for a new new name for the program. Maybe there’s something clever with BORG or YODA? Call or text us at ‪(802) 877-TECH.

What can the antibiotics industry learn from COVID?