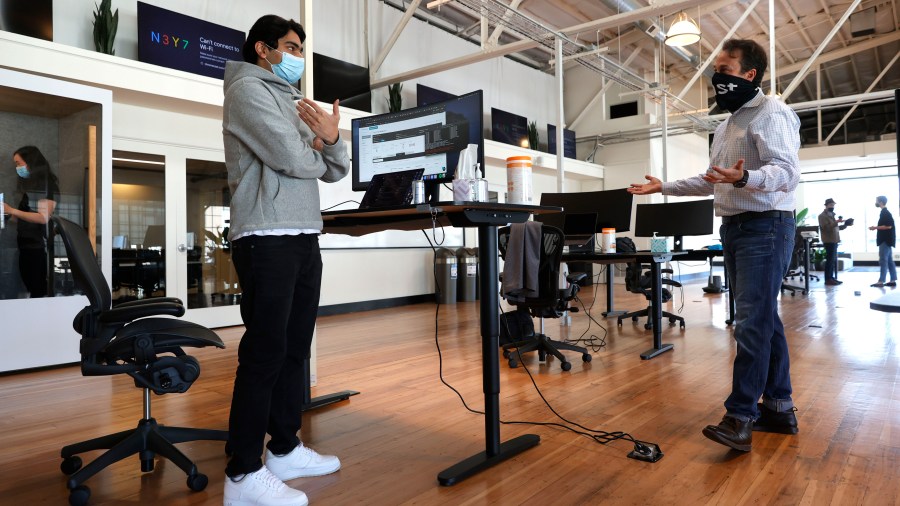 The move to connecting virtually means it’s not just Silicon Valley area companies that are seeing a boost in funding, but startups across the U.S.
Listen Now

The move to connecting virtually means it’s not just Silicon Valley area companies that are seeing a boost in funding, but startups across the U.S.
get the podcast
get the podcast

Hawkins is based in Kansas just south of Kansas City. He said that when he went to raise money for the startup, it was way easier to get meetings with venture capitalists in Silicon Valley and New York than it was before the pandemic.

“We were able to meet with many more VCs than usual because now the boundaries, travel and accommodating schedules wasn’t as difficult,” Hawkins said. “Versus, with Zoom, ‘Hey, let’s jump on a 15-minute call.'”

Hawkins raised $5 million for the company from investors all over the world.

Venture capital investors poured more money into startups over the past year than ever before, according to financial data company PitchBook.

Venture capital financing is, of course, how a lot of tech startups raise money. The data for the last 12 months may come as something of a surprise, though, since investors have historically favored face-to-face meetings before handing a promising founder millions of dollars.

The industry is known for being majority white and majority male and, historically, investors have placed a lot of value on vibe, or the intangible qualities of an entrepreneur.

“There’s a lot of cognitive bias that goes into vibe and, in particular, similarity bias,” said Josh Stein, co-managing partner of Threshold Ventures. Stein believes virtual fundraising is going to change that.

“You’re going to see more underrepresented groups raising venture capital, where I think some of the cognitive biases that hindered that in the past will have been mitigated somewhat by remote work,” Stein said. “I think that’ll be a very positive development.”

Other investors also said bias is reduced because they’re relying more on email and text, that meetings — virtual or otherwise — are not as important.

“If I’m sitting across from you in a meeting, and I asked you questions about your numbers, you’re going to tell me the numbers. But a lot of what you’re doing is using your personality, your presence to kind of convince me that, ‘Hey, trust me, I know what I’m doing, you should listen to me,'” said Sarah Kunst, general partner and founder of the venture firm Cleo Capital.

Now, Kunst said, if she asks for information over email, the numbers have to be charming all on their own. This is also a moment where numbers and founders who are number geeks have an opportunity to stand out.

“If you’re somebody who really shines in terms of your thoughtfulness and deliberateness you put into emails and into spreadsheets, now that’s shining a lot more,” said Kunst. “Whereas before, no one might have heard from you because you weren’t the loudest voice on a panel.”

While Silicon Valley remains a big center for venture funding, PitchBook analysts say there have never been more deals happening outside the Valley and they doesn’t see that trend reversing any time soon.

Number geeks all over the country should get their spreadsheets ready.

Diversity at VC firms and in their portfolios has long been an issue in tech. During the protests for racial justice last summer, the industry pledged to do better. One year later, Wired reports that progress has been slow. According to data from the National Venture Capital Association, the share of Black and Latinx VCs was just 4% each in 2020, well below their respective share of the population. The number of firms that have created diversity equity and inclusion plans is growing.

Also, we’ve got an update on a story we brought you last week about Twitter offering a cash bounty at DefCon to anyone who could root out bias in its photo cropping algorithm. A winner has been named: Bogdan Kulynych, a graduate student in computer security in Switzerland.

Kulynych found that not only did the algorithm give preference to white and female faces, as Twitter’s own audit found, but that it also favored younger, thinner women. In a series of tweets, Kulynych expressed his excitement at winning the contest, and offered the following thoughts: ” … a lot of harmful tech is harmful not because of accidents, unintended mistakes, but rather by design. This comes from maximization of engagement and, in general, profit,” he said, adding: “Spreading clickbait and misinformation are not necessarily due to ‘biased’ algorithms.”