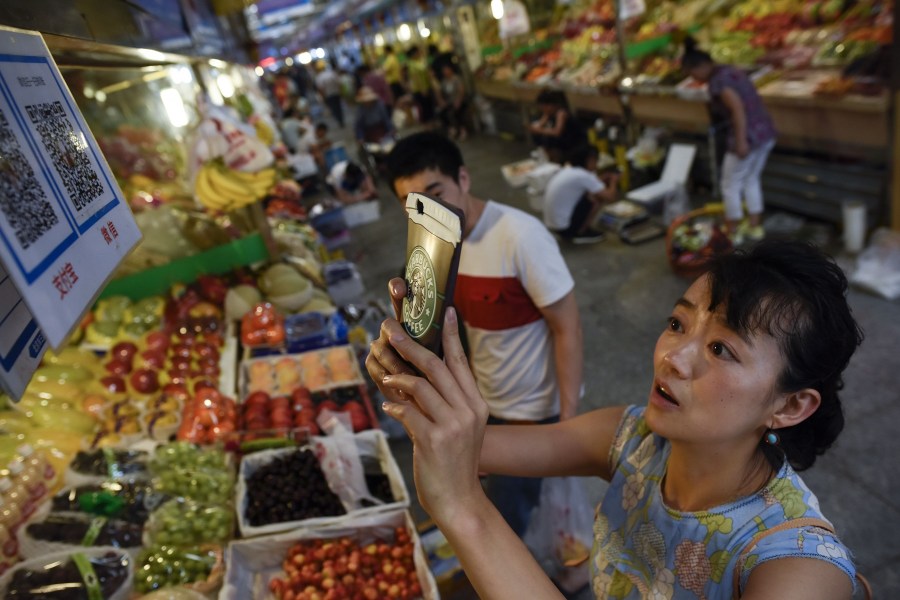 Residents are being asked to supply a lot more personal information to both companies and the government.
Listen Now

In China, the number of new cases of COVID-19, the disease caused by a new coronavirus, is dropping. But precautions are still in place, including heightened surveillance of residents there by the government. The country has been using drones, facial recognition and QR codes to track people’s movements. One company said it had an algorithm to determine if people weren’t wearing masks.

With all this data, there are concerns that after the threat of COVID-19 eventually passes, the government may be sitting on a lot of data about people’s day-to-day lives, and that could have potentially dangerous consequences.

I spoke with Jennifer Pak, Marketplace’s China correspondent based in Shanghai. I asked her what information she has to turn over on a daily basis.

Jennifer Pak: Right now, if I enter into our office block or any public buildings, I have to sign my passport number, cellphone number, I have to record my temperature, whether I’ve left Shanghai during this entire month, have I visited Hubei province, which is the epicenter of the virus outbreak. This happens also in my residential compound: I have to get passes. So this is part of the fight against the spread of the virus, in the name of that. So a lot of people are willingly providing it. But, of course, now there are companies and also government officials requesting even more data.

Molly Wood: So what companies are requesting more data?

Pak: For example, I’ve noticed when I go to purchase my bubble tea or when I’m at a restaurant, they’re asking me to scan a QR code and order from there, to order on WeChat. And then they get all that data, because of course WeChat is linked to WeChat Pay, and to access that, I have to link my bank account, a scan of my passport. So it’s asking for a lot of information. Where does this data go? And before I used to resist by just telling them that my battery has run out, could they not just take down my order? And in some cases, the businesses say, “Well, our machine has broken,” or “We don’t have any cash on hand right now,” because businesses are just starting to get back up. So they’re forcing you to use mobile payment. They’re saying, “Well, at least this reduces the contact between you and our staff. It’s for your protection.”

Wood: And what do you and other people in China worry about with this sort of constant data collection?

Pak: Well, I think it’s just the unknown. And that’s always the case, right? So companies are all being asked to take the temperature of every staff, to take their travel history details, to record down their home addresses, their phone numbers, like all of this data. A lot of times you can’t resist, because if you resist it, you’re just not allowed in. In terms of my concern, well, I’m always just worried that all of this information is being collected, because they know all of my details. The point is that not all of this was connected. Once all of this is connected, then that big data becomes very, very powerful. Could the Chinese government use it to target people they do not like?

Here in the U.S., Amazon has paused nonessential travel for its employees — not just overseas, but domestically, too. That is, of course, on the heels of lots of companies canceling travel or conferences. And last week, Google confirmed one of its employees based in Zurich had tested positive for the new coronavirus.

Vox had a good roundup of some of the tech that’s being used to help contain the spread of the virus, including disinfecting robots, artificial intelligence that can detect the virus in the human body and surveillance tech for tracing its spread. Also, facial recognition companies are making all kinds of claims about how their technology can help mitigate the spread of the virus. The story positions this as the first big test of whether all this technology can actually make an impact or just help people sell tech solutions to make a buck. If I had to guess, I’d say a little of both.

Tech employees who get paid in stock, take note: Last week, Sen. Bernie Sanders co-sponsored a bill that would tax the stock options of certain employees when those options vest, even if you haven’t sold them and received the money. The tax would apply to employees who make at least a $130,000 annually and have more than a $100,000 in stock vesting in that year. That’s not a gigantic number of people, but it’s also not small. There’s a scenario in which people would have to pay a tax on options that have vested, but then end up in a situation where those vested options are worthless down the road, meaning they’d have paid taxes on money they, uh, never got, so really just a donation … to the government.

It’s not clear what problem this is intended to solve, but expect the tech industry to, you know, have some concerns.

And in case you missed it last week in all the other news — the hackers who stole the client list of the facial recognition company Clearview AI leaked that list, and, surprise! It’s so much more than just law enforcement! BuzzFeed News and others reported that clients include Walmart, Macy’s and the NBA. Meanwhile, The Washington Post reported that Immigration and Customs Enforcement used the tech to run facial recognition searches on millions of driver’s license photos in Maryland, a state that grants special driver’s licenses to undocumented immigrants. We will keep following this.