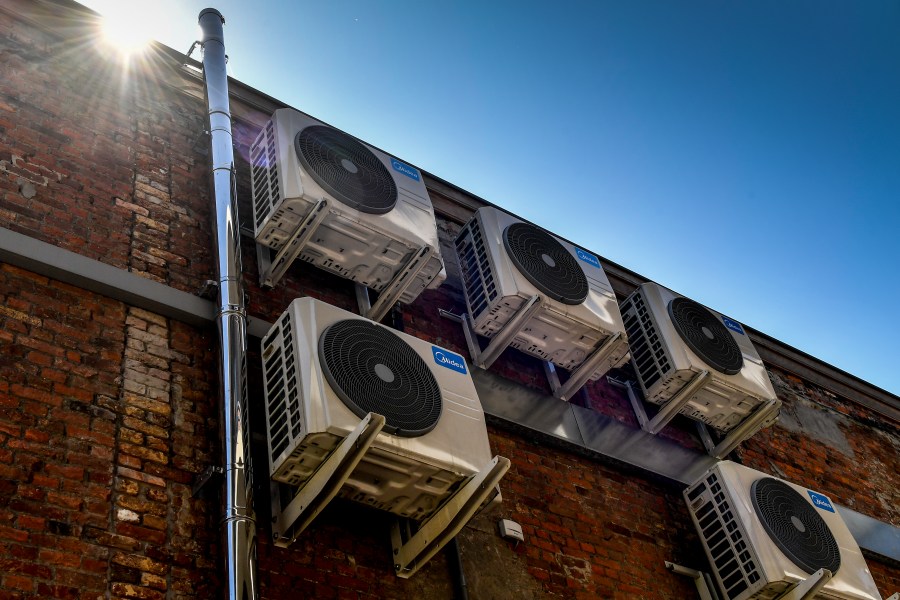 Air conditioners help us stay cool during hot weather. But at the same time, the refrigerants each unit has is contributing to global warming -- much more than carbon dioxide. Dirk Waem/AFP via Getty Images

Air conditioning units use a refrigerant that harms the environment. Some clean-tech startups are working on climate-friendlier units.
Listen Now

Air conditioners help us stay cool during hot weather. But at the same time, the refrigerants each unit has is contributing to global warming -- much more than carbon dioxide. Dirk Waem/AFP via Getty Images
Air conditioning units use a refrigerant that harms the environment. Some clean-tech startups are working on climate-friendlier units.
get the podcast
get the podcast

A report out this week warns extreme heat waves, like the ones many parts of the world have experienced this summer, are likely to worsen over the next three decades. Climate research nonprofit First Street Foundation says by 2023, more than 8 million Americans could experience temperatures above 125 degrees Fahrenheit.

In 30 years, more than 107 million people across the country will deal with those sweltering temperatures. And most of them will probably want air conditioning. But traditional AC units create more carbon emissions, which create more global warming.

Marketplace’s Kimberly Adams spoke with Ankit Kalanki, a manager at Third Derivative, a climate technology accelerator. He said there are companies working on updating the technology that keeps us cool. The following is an edited transcript of their conversation:

Ankit Kalanki: These companies and these solutions basically use more efficient components, like inverter compressors. They use better designs for the heat exchangers, smart sensors and controls, and then lower global warming potential refrigerants, which are a very critical piece of the traditional vapor compression technology. And we were able to see almost a 75% reduction in energy use and an overall 80% reduction in climate impact when you combine the lower global warming potential of the refrigerants these solutions use.

Kimberly Adams: You mentioned refrigerants. What about refrigerants is so key for how we think about the future of air conditioning technology?

Kalanki: Refrigerants that are used in these commonly sold air conditioners today, be it in the commercial applications or be it in the residential applications — these are about 1,000 to 2,000 times more potent than carbon dioxide in terms of their global warming potential. And when these equipments get discarded at their end of life, typically the refrigerant just gets leaked into the environment.

Adams: What does the global market for air conditioning look like as we consider the climate warming all over?

Kalanki: Globally, we have about 1.6 billion air conditioning units that are operating today. And over the next three decades, we will see this number go up to 5.6 billion air conditioners. So it’s almost a four times growth. And within this air conditioner segment, the residential or the room air conditioning segment, will see the fastest growth. We have about 1.2 billion room air conditioners, or racks, operating today. And that will go all the way up to 4.5 billion by 2050. So 3.3 billion more room air conditioners will be added over the next three decades. And this will happen primarily in the developing world — in India, in Indonesia, parts of China. And then, in some of the regions of the developed world where people never thought of buying an AC earlier, like the Pacific Northwest, and in the U.K. and France, where these heat waves now are really asking people and requiring people to go out and buy an air conditioner now for the first time.

Adams: How affordable will this new technology be for the people who need it most, particularly in these developing parts of the world, and those that are newly in need of cooling systems for their homes and businesses?

Kalanki: These new units will definitely be costlier on the upfront cost, because they will either use new componentry, they will require new manufacturing facilities to mass produce these units while the demand builds up. And therefore, they are likely to be costlier, maybe up to two times or even higher, in some cases, compared to these traditional air conditioning units that are most commonly sold today. This is where we have to change the consumers’ approach to looking at ACs. We have to shift away from the upfront cost to a lifecycle cost analysis and understanding when we are making a purchasing decision of air conditioners. Because these air conditioners that are three or five times more efficient than traditional, or the commonly sold ACs, they are much cheaper to operate over the 10-year lifetime of these ACs. And you can have a payback period in under three years, even if the upfront cost is two times more than these traditional ACs that are out there.

Adams: But that’s not an option for everyone. People can figure out that something’s more cost effective over the lifetime of it. But if you don’t have the difference in funds on the upfront, it doesn’t make much of a difference.

Kalanki: That’s right. And I think that’s where there are two additional levers that will be key to really make these novel solutions affordable for consumers. So we need to do more on the policy side where the performance standards need to be stretched, the performance ladders need to be stretched, so that we can really ensure that the high-efficiency units are appropriately categorized and consumers can really differentiate between the energy savings of these high-efficiency units. Also, innovative financing mechanisms will play a key role in making these units affordable for people. Innovative mechanisms like on-bill financing, where the local utilities can actually jump in and spread out this upfront costs over the monthly electricity bills that the consumers pay after offsetting the energy savings that they’re able to achieve — [that] can really go a long way in accelerating the adoption of these new and efficient air conditioners.

Adams: The recent Inflation Reduction Act, which was just passed into law, allocates hundreds of billions of federal dollars for climate technology. How are clean-tech startups, including your accelerator and similar ones, going to feel the impact of all this new investment?

Kalanki: With all these incentives, all these tax credits, all the rebates that we are seeing across the entire climate tech space, we will start seeing a spike in the demand for the climate-friendly solutions. From large corporates, from businesses, from institutions. And we will likely, as a result of that, see more and more startups that will enter this climate tech space. And more and more [venture capitalists] who are willing to invest in these innovations. All of this just translates to a huge role and a bigger role for climate tech accelerators who are actually at the center of bringing together all these stakeholders, the startups, the corporates, the off-takers, the VCs to kind of speed and scale innovations to market.

Here is our recent episode about heat pumps, which are also upending the HVAC market, in case you didn’t catch it.

Now, this whole conversation I had with Ankit Kalanki focused solely on clean technology in air conditioners. But Fast Company has an article that presents a whole different alternative to keeping a space cool: windows.

The article highlights how, in the near future, some windows, through coatings or films, will be able to conserve heat in cold weather and also reflect heat during the summer, all while keeping the light flowing in.

A cool idea — but what does that mean for my houseplants? 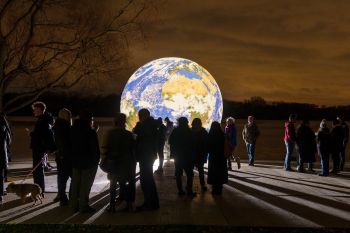 How climate change could hit the global economy