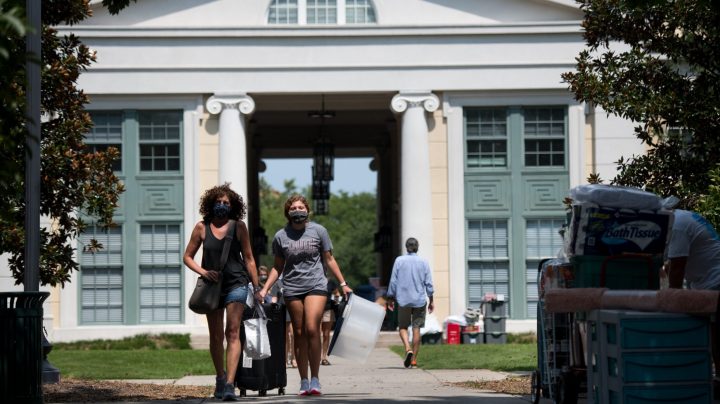 COPY
A lack of affordable housing can be a barrier to attending college, so schools are trying to find alternatives. Sean Rayford/Getty Images

A lack of affordable housing can be a barrier to attending college, so schools are trying to find alternatives. Sean Rayford/Getty Images
Listen Now

More than 40% of the students on this country’s college and university campuses report that they’ve experienced housing insecurity, according to annual surveys by the Hope Center for College, Community, and Justice at Temple University. That’s been true both before and during the pandemic.

One of the contributing factors is that there just isn’t enough student housing. And this year, the problem could be even worse than usual, thanks to pent-up demand to live on campus and rising rents off campus.

So schools are getting creative to plug the gap.

At one point, the housing waitlist at the University of Utah in Salt Lake City had over 3,000 names. So, the school leased a building from another college, converted an on-campus hotel to student housing and asked alumni in the area whether they’d be interested in renting to current students.

Bethany Hardwig is leading that program.

“The student and the host can fill out a profile form that has kind of been compared to an online dating form — ‘This is who I am, this is what I do. This is what field I work in,'” Hardwig explained.

At Long Beach City College in Los Angeles County, there are no dorms. Traditionally, students have lived at home or on their own, like at many urban community colleges. But last fall, through a survey, the school discovered that at least 70 students were living in their vehicles.

The school is applying for money to build some housing, but in the interim, it’s allowing students to park their cars in a secured parking structure and providing access to showers and wi-fi through a pilot program.

“These students need help today,” said Uduak-Joe Ntuk, president of the college’s board. “And this is, you know, a stopgap measure that we can intervene and try to address a substantial barrier to their academic success.”

A lack of affordable housing can be a barrier to even attending college.

“We run the risk of calcifying class inequality in higher education if there are some places that have figured it out and others don’t,” said Mark Huelsman of the Hope Center for College, Community, and Justice.

Huelsman pointed out that most students aren’t eligible for federal housing aid. He said changing that would go a long way toward solving the problem.