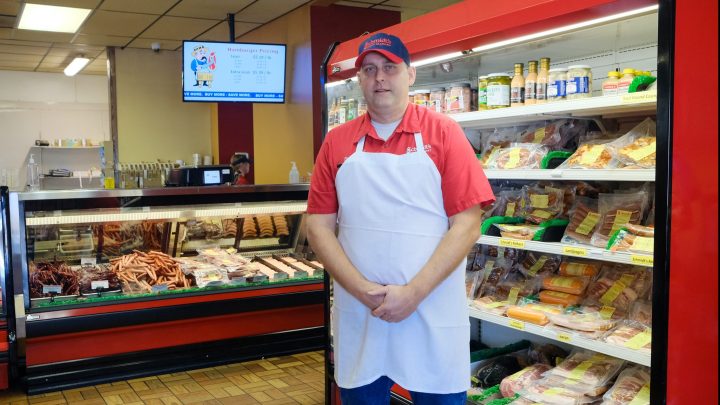 Inside Schmidt’s Meat Market in the small town of Nicollet, Minnesota, a machine is busy vacuum sealing package after package of summer sausage, one of the shop’s specialties.

Productions Manager Brian Schatz explains that Schmidt’s has both a retail store, where they sell products like these summer sausages, and a processing business, where they contract directly with farmers to butcher their animals.

On the processing side, customers have been traveling farther in recent years to access Schmidt’s services, Schatz said, who also serves as president of the Minnesota Association of Meat Processors.

That’s a span of a couple hundred miles.

Early in the pandemic, COVID-19 outbreaks forced some of the country’s largest slaughterhouses and meat processors to close. Farmers were left with nowhere to send their animals, and fears of meat shortages spread across the U.S.

Now, there’s interest in diversifying that supply chain by boosting capacity at the local scale — that includes state and federal grants to help small processors with expansion.

But there’s been a big challenge, and it’s a familiar one: finding workers. Labor has been a chief concern as processors consider expansion, said Nicole Neeser, who directs the Minnesota Department of Agriculture’s dairy and meat inspection program.

That’s why Dave Endicott, a dean at Central Lakes College, one of Minnesota’s community and technical colleges, is developing a new certificate program at the school.

“My colleagues laugh. They call me the ‘dean of meat-cutting’ jokingly,” he said. The program is supported in part by $150,000 in state funds.

Part of the challenge of attracting people to this line of work is that wages can start around $12 to $15 an hour, Endicott said. The hope is, with the certificate that the school will be offering, graduates will be eligible for far higher wages, closer to $25 to $30 an hour.

Another college in the state system is also developing a similar program. Both are slated to launch next fall.