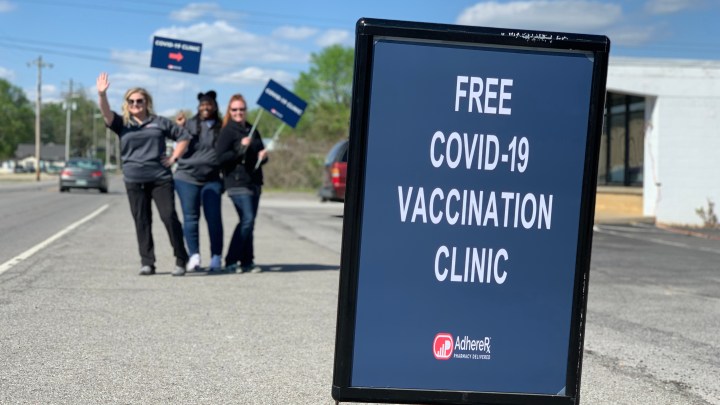 COPY
Employers from hospitals to meatpacking plants are pushing vaccination for their employees' and customers' safety. In some cases, the unjabbed have lost their jobs. Blake Farmer/WPLN News
COVID & Unemployment

Employers from hospitals to meatpacking plants are pushing vaccination for their employees' and customers' safety. In some cases, the unjabbed have lost their jobs. Blake Farmer/WPLN News
Listen Now

Near the Canadian border in Presque Isle, Maine, nurse Stephanie Grandy was notified in late August that she had until the end of the month to come around to the COVID shot.

She told the hospital where she worked that she had religious objections. “Of course I’m not going to change my mind,” Grandy said. “And I was terminated.”

She filed for unemployment benefits immediately, and her application was approved. But after being paid a couple of weeks, she received mail from the Maine Department of Labor.

“The claimant was paid benefits to which they were not entitled,” the letter said. “This decision establishes an overpayment in the amount of $1,022.00.”

The letter asked for repayment to the state. “I paid my house payment with it. So I don’t have the money now,” Grandy said.

Grandy’s employer, Northern Light Health, also asked for her to return most of the $6,000 signing bonus she took less than a year ago.

Companies are now following through on COVID vaccine requirements, and people across the country are being fired from their jobs after rejecting the jab. In many states, jobless benefits are off-limits for people who refuse to get vaccinated as a requirement for continued employment.

Grandy and her husband, who also is a nurse and refuses the vaccine, have seven kids, with two still at home and a couple in college. She and a growing number of other vaccine holdouts have turned to GoFundMe campaigns to raise money.

But unemployment policies vary from state to state. The Joe Biden administration has issued a vaccine requirement, but it was just put on hold by a federal appeals court.

New York state notes that unemployment claims are handled on a case-by-case basis. But New York is quite explicit: Losing a job for resisting the vaccine means no jobless benefits, especially in fields like teaching or nursing, where there is a “compelling” public health interest and other immunizations are already required.

“If they want to apply for unemployment, the employer is going to come in and say, ‘You know what? We fired them for cause,’ and they get nothing,” he said at a news conference in mid-August, pushing back on the state’s requirement.

But other states are starting to review their unemployment benefits policies.

“Generally speaking, we look at the terms of the hiring agreement,” said Melissa Owens, an assistant administrator of Tennessee’s unemployment trust fund.

The Tennessee Department of Labor’s policy is that if someone was already hired and then the employer required them to take a vaccine, they’re not to blame. “We would consider that a change in the hiring agreement,” she said. “And there would be no breach by the claimant for failure to comply with that requirement.”

Still, Tennessee’s Legislature passed a bill in late October to set this policy in stone.

State Sen. Raumesh Akbari, a Democrat from Memphis, noted that Republican leaders are being more accommodating to those who are scared of the vaccine than those scared of the virus.

“For instance, there were folks who expressed fear of the COVID-19 virus and did not wish to go to work because of that. And that was not an exception that we granted to them,” she said.

But some GOP lawmakers say they feel differently about the vaccine requirements, and other states are also changing their policies.

“I believe the vaccine is the best defense against COVID-19,” she said in a statement of support. “But no one should be forced to choose between making a living or standing up for their personal beliefs.”

Allowing people to collect unemployment is just a short-term solution, though. While the broad federal rules are on hold in court, businesses know they could still take effect. And being unvaccinated in a field like health care can make people virtually unemployable, though some health systems are torn on the issue, given how short they are on nurses.

At Ballad Health, in rural northeast Tennessee and southwest Virginia, one-third of employees haven’t been vaccinated, said CEO Alan Levine. He told a congressional committee at the end of October that his hospitals have been slow to enforce a vaccination requirement in favor of education. Even then, some nurses are leaving on their own.

“We have started to have some resignations already just in anticipation,” he said.

With 700 nurse vacancies at his company, Levine said he can’t afford a mass firing — not for the unemployment costs, but because of how difficult it would be to find replacements.

In a summary of its emergency vaccination rules for employers with 100 or more workers, the Occupational Safety and Health Administration points out that “unvaccinated workers are much more likely to contract and transmit COVID-19 in the workplace than vaccinated workers.”