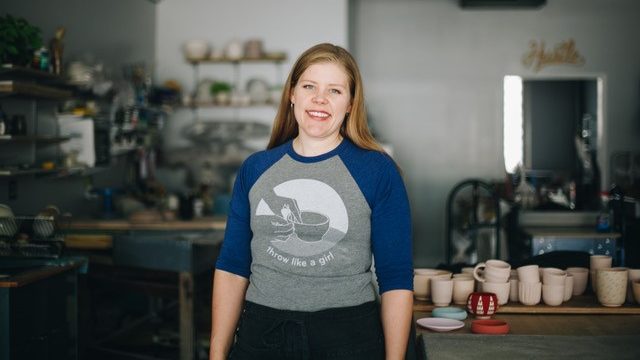 COPY
“We’ve diversified the ways in which people engage with the space,” said Jennie Tang, owner of The Workshop MPLS, a ceramics center in Minneapolis. Courtesy Jennie Tang
My Economy

“We’ve diversified the ways in which people engage with the space,” said Jennie Tang, owner of The Workshop MPLS, a ceramics center in Minneapolis. Courtesy Jennie Tang
Listen Now

Running a small business has been a challenge for many during the pandemic, and some entrepreneurs are finding creative ways to stay afloat and thrive.

“When we closed in March of 2020, we went from 75 to basically three people being in the studio regularly,” she said. “I sat in the studio looking around the space that I had created, and I just kept thinking, like, ‘There must be some way for us to engage those students that we now can’t have physically in our space.’”

When her studio was closed to the public, Tang said, she developed take-home clay kits and began renting and selling her equipment. She also expanded her studio’s kiln-firing services to help produce work for other artists. Tang said that not only did this bring in extra revenue, it also kept her customers engaged with clay.

“They were still working with clay, and that was even more important when folks were at home,” Tang said.

When the studio reopened in September 2020, Tang implemented changes to accommodate pandemic safety.

“One of the things that we did was we switched to an appointment-based reservation system for our studio space,” she said. “Previously, we kind of had an open-door policy.”

An appointment-based open studio system allowed Tang to keep track of the number of people in her studio and brought in more customers who were interested in using the space as needed.

“The thing that we’ve noticed post-pandemic is we have a lot more folks who were taking one session of classes, and then they transitioned into what we call an open-studio membership, which is working around the studio self-directed, and they then rent the studio space on an hourly basis,” Tang said.

The option of open studio usage has drawn in new customers. In October, 33 new students joined the studio’s ceramics classes.

“We’ve diversified the ways in which people engage with the space,” she said.

Given the circumstances of the pandemic, Tang said, her studio’s growth was unexpected.

“I had no idea that over a year later, we would be in this place where we are successful, and we’re doing it in a way that it feels really true to what our goal here is, to sort of expand creativity with people,” she said. “I feel very fortunate that we seem to be doing really well, and I’m really happy about that.”