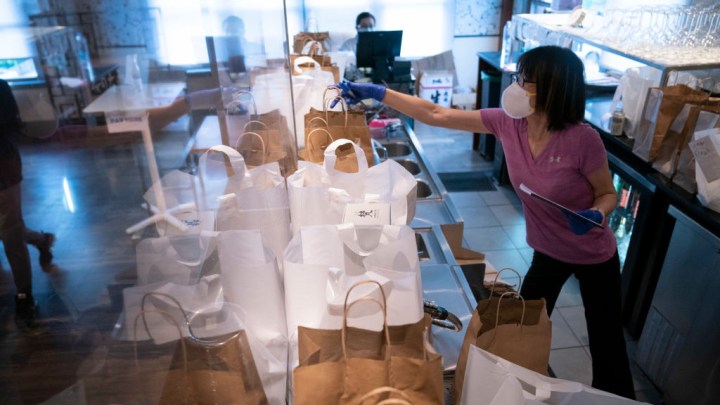 COPY
Food service workers are among the most vulnerable. But the retail, hospitality and even health care sectors face challenges, too. Sarah Silbiger/Getty Images
COVID-19

David Brancaccio and Rose Conlon May 4, 2020

Food service workers are among the most vulnerable. But the retail, hospitality and even health care sectors face challenges, too. Sarah Silbiger/Getty Images
Listen Now

Millions of Americans are newly unemployed due to lockdowns, business closures and reduced consumer spending during the COVID-19 pandemic. But a new report by the McKinsey Global Institute warns that up to one-third of the U.S. workforce, as many as 57 million Americans, could lose their jobs, be furloughed or have their hours reduced in the coming months.

“Overall, the numbers are stark … this is really different than any recession any of us have lived through,” said Susan Lund, a partner at the McKinsey Global Institute. “It’s more like an emerging market currency crisis where suddenly large parts of the economy just shut down.”

But certain workers are particularly vulnerable as the pandemic continues. McKinsey finds that the most precarious jobs tend to be lower-wage, and they’re disproportionately filled by women and workers of color.

Lund spoke to “Marketplace Morning Report” host David Brancaccio about how the findings might shape the country’s economic recovery in the future. The following is an edited transcript of their conversation.

Brancaccio: If you work at a restaurant, if you work in a brick-and-mortar retail store, if you work in sports or entertainment that depend on having crowds, the work has fallen off a cliff. But where else are jobs vulnerable?

Lund: When we look throughout the economy, in every sector there are some jobs that are vulnerable. The third largest group of jobs that are vulnerable are actually in health care. Now that may seem surprising given the COVID-19 crisis and the fact that hospitals are overwhelmed. But there are lots of nonessential or elective procedures, various testing and surgeries, that have simply been postponed — in part because hospitals are now devoted to caring for COVID patients. And so there are a lot of health care workers who, paradoxically, are out of work.

Brancaccio: If you do an overlay for economic class or race or gender, interesting patterns do emerge, do they not?

Lund: Well, it’s a very unfortunate pattern. We find roughly three-quarters of vulnerable jobs are for people earning below the median salary in the U.S. These tend to be low-wage jobs, they’re disproportionately part-time jobs, jobs held by minorities, and potentially by women. Certainly in the early weeks of this crisis we saw that a disproportionate number of women were filing for unemployment claims. And that reflects, in part, that they are more likely to be part-time workers and also work in retail, hospitality and food service.

Brancaccio: And what about recommendations based on this research for policymakers? What are some priorities?

Lund: We’ve seen for the last two decades that the U.S. labor market is pulling apart into the haves and have-nots. There are a lot of jobs that don’t pay a lot, they don’t have benefits, they don’t have protections like sick leave. And that’s come into stark relief during the COVID crisis.

So the immediate priority, of course, is to help replace the income of people who have suddenly lost their job or can’t go to their job because their business has been closed down. But, longer term, we should think about coming out of this COVID crisis in a different place. And maybe it’s time to rethink the wages and benefits to many of these jobs that are important in our economy.

And we should also think about using this downtime to help workers learn new skills. One of the things that would be tremendous to see, and a few companies are moving in this direction, is using this downtime to have workers do online learning courses, so that they’re going to be ready for the long-term shifts that were already underway in the economy toward more skilled work.

Brancaccio: That introduces the flip side of what we’ve been talking about, what are the most vulnerable job categories. The jobs that require more skills may be the more protected jobs.

Lund:  Yeah. Certainly we see that there’s a strong correlation between the education requirements of a job and the ability to work from home. So unfortunately, in this crisis, it’s the people who are least likely to have a financial cushion, the least likely to have savings that they can rely on, that are suddenly out of work. While people who are better off financially are much more able to do their job remotely and carry on as they were before.