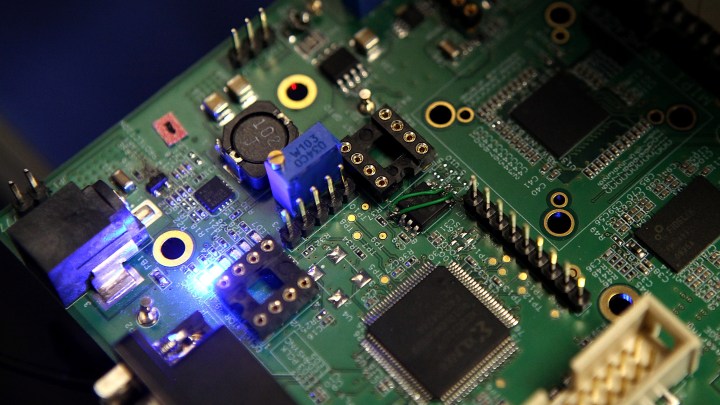 COPY
Semiconductors are pictured on a circuit board used in a Samsung video camera in San Jose, California. Justin Sullivan/Getty Images
Trade showdown

Semiconductors are pictured on a circuit board used in a Samsung video camera in San Jose, California. Justin Sullivan/Getty Images
Listen Now

Broadcom just announced that it missed earnings targets for the second quarter and lowered expectations for the rest of the year. Not only did Broadcom’s stock sink, shares in half a dozen chipmakers and electronic component manufacturers did, too.

The semiconductor industry slowed down last year. Much of that was due to the slowdown in China’s economy, according to Tristan Gerra, senior analyst at RW Baird. The industry was left with piles of inventory — chips and electronic components.

“Inventories have been very high [for] the past year and a half in the tech supply chain,” Gerra said.

But conventional wisdom held that in the second half of 2019, things would turn around.

“As a result of this bullish commentary, the SOX index rallied as much as 30%,” Gerra said, referring to the Philadelphia Semiconductor Index known as SOX.

When U.S.-based Broadcom, a major supplier of Huawei, reported it had missed its earnings target yesterday, the trade war’s collateral damage was made plain for all to see. The high hopes for 2019 came crashing down.

“If you look at this miss last night, it was a gut punch to tech investors,” said Daniel Ives, managing director at Wedbush Securities.

Not only had Broadcom lost out on sales to Huawei, orders in general were down, too.

“The worry is that this could be a canary in the coal mine for broader weakness ahead,” he said.

That weakness could affect the entire tech sector, not just other chipmakers. Uncertainty is debilitating for companies with complex supply chains, like cellphone manufacturers.

There are also concerns that a cycle of retaliation between the United States and China is kicking in, and that U.S. tech companies will be targeted.

And that’s bad news for the economy and stock market, according to Craig Ellis, senior managing director with B. Riley FBR.

“The sector is an effective leading indicator for broader economic trends,” he said.