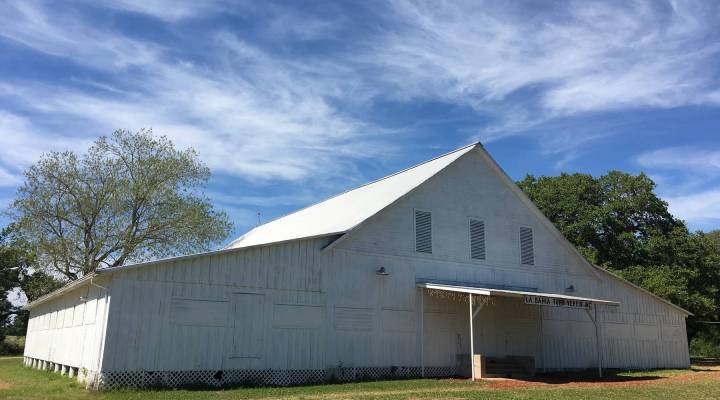 In rural Texas, people are trying to preserve historic “dance halls” built around the turn of the 20th century.

For decades, German and Czech farming communities have used these barn-like buildings for dances, parties, or just to hash out some community business. But with changing traditions and musical tastes, many of the halls have crumbled and been lost to time. Weddings might help save the ones that are left, but it’s still an uphill economic battle.

“Ulman’s Laendler” is the kind of song you might’ve heard at a dance hall in the early 1900s. It was recorded in 1929 by Texas Czech orchestra Bacova Ceska Kapela. But dance halls weren’t just for music. They were also like a town square, according to historian and Texas music expert Joe Nick Patoski.

“The first building where everybody meets is the dance hall, and it’s used not just for dances, but it’s used for social functions,” he said. “It’s when the community meets, and wants to discuss affairs, they all meet at the dance hall.”

Through the years, the traditional waltzes and polkas played in the halls morphed into western swing and country music. Eventually, the dance of choice became the boot-scootin’ Texas two-step, still practiced at halls across the state when groups like Bobby Flores and the Yellow Rose Band  take the stage. According to Patoski, the participatory experience of a dance hall is what draws people.

“After the song’s over, people aren’t applauding and cheering, they’re catching their breath and they’re going back to their seat so they can get another beer and get rested up for the next song,” he said.

There’s been renewed interest in these halls in recent years. They can hold hundreds of people, so some have been renovated and turned into modern music venues with professional sound systems. Others, like La Bahia Turn Verein strive for a more traditional feel, but pull in money through wedding rentals.

“I was born and raised in here, my parents, my grandfathers, everybody put this here before me, and so that’s why I just fell in line,” said Roy Schmidt, president of a non-profit group that owns La Bahia.

Roy Schmidt grew up attending dances and events at La Bahia Turn Verein. He’s now the hall’s main caretaker and president of the non-profit that owns it.

There’s a minimalist beauty to the place, with its white-walled exterior, smooth wooden dance floor and drop-down windows that let the country breeze in. Schmidt said the group that owns the hall was broke just a few years ago, but now has between $40,000 and $50,000 in the bank, mostly thanks to rentals for events like weddings.

“And we get ‘em all the way from Atlanta, to California, to all over the country,” Schmidt said. “It’s all word of mouth. I mean, basically they came through here, one of their friends got married here.”

Still, that business has limits. There’s only so much you can charge for an old, non-air-conditioned building in Texas, and then there’s the upkeep.

The stage at La Bahia Turn Verein near Burton, Texas.

Fleming’s group has counted more than 100 historic halls across the state [some marked on this map]. The group helps halls come up with new business models and promote events. The organization also distributes grants for preservation work; it has about $30,000 on hand for that this year. According to Fleming, there’s not one way to save a hall.

“It’s a matter of what makes the best sense at the time, and being open to the possibilities of change,” she said. Down the road from La Bahia, Jon Perez unlocks the door to Round Top Dance Hall, another historic building that’s taking a for-profit approach. Perez said he’s basically breaking even.

Round Top also hosts weddings and the occasional live band, but Perez pulls in money from a restaurant and bar next door as well. He said a big challenge is that it’s getting more expensive to throw a dance.

“The price of entertainment, and entertainers, are skyrocketing,” he said. “To try to, you know, pay what the musicians are due, your insurances and everything like that, it’s tough.”

Deb Fleming said a broader cultural shift is key to saving the halls.

“If the next generation doesn’t step up to really engage with these kind of places, these places are going to die a slow death, because many of the halls that are non-profit or community halls are basically managed and maintained by people in their 70s and 80s,” she said.

Texas lawmakers are considering legislation that could help. It would let small music venues apply to get a cut of the money back from alcohol sales taxes.