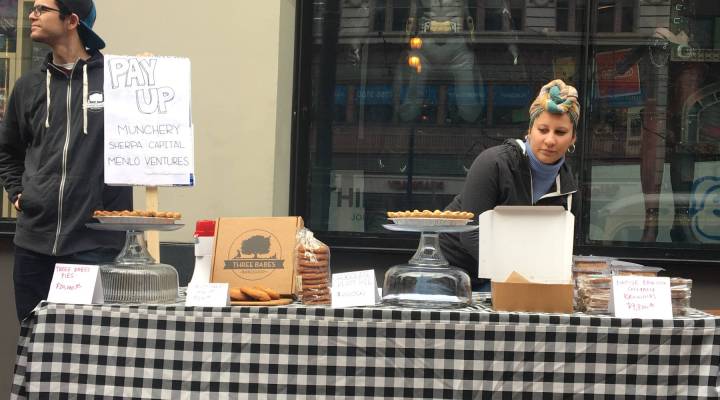 COPY
Three Babes Bakeshop employees at a bake sale protest outside of Sherpa Capital, one of the VC firms that invested in Munchery.  Sam Harnett for Marketplace

Three Babes Bakeshop employees at a bake sale protest outside of Sherpa Capital, one of the VC firms that invested in Munchery.  Sam Harnett for Marketplace
Listen Now

In 2018, U.S. venture capital investment surpassed the 2000 dot-com peak for the first time. According to the financial data company PitchBook, investors put some $130 billion into thousands of U.S. companies. Many of these businesses will not make it, and as some flame out, they’ll leave behind a trail of debt.

This is exactly what happened with Munchery, a San Francisco-based startup that allowed customers to order prepared food through their phones. Munchery made most of its own meals, but also bought some from local bakeries and restaurants. It recently shut down, owing tens of thousands of dollars to the small businesses owners it purchased from, like Lenore Estrada.

It took almost a decade for Estrada to nurture Three Babes Bakeshop into a business with 19 employees and a millions dollars in gross sales. She built her bakery the old fashioned way: making and selling a lot of pies. In addition to selling to customers and local restaurants, Estrada also sold her pies through Munchery. She said that was a small part of her business, but Munchery sometimes put in large orders which provided a nice influx of cash every now and then.

Last Thanksgiving, Munchery requested a thousand pies from Estrada. The small staff was busy with the bakery’s regular orders, so even though Estrada had a newborn baby at home, she stepped in to bake the Munchery pies herself. To get all the pies done she worked the graveyard shift from 10 p.m. to 8 a.m., keeping the ovens full all night. She worked several nights in a row to get the pies all done. Estrada said Munchery owed her $20,000 for the order, but the check never came. In mid-January, Munchery abruptly closed.

Munchery started in 2010. Over the last eight years it expanded to a handful of major cities, including San Francisco, Seattle, and New York. It raised $125 million in venture capital, which it socked into things like pie orders and advertising. When the VC money started dwindling in 2017, Munchery began laying off workers and stopping service in some cities.

Munchery CEO James Beriker said in email to Marketplace that he was negotiating for more venture capital this fall, but it didn’t come through. The company shut down, leaving vendors with debt and customers who say they now have useless gift cards. Employees said they didn’t get the 60 days notice as required the Federal WARN Act and some have filed a lawsuit.

This kind of high-risk, down-to-the-wire gamble is routine in the VC game, said Mara Zepeda. She helped begin Zebras Unite, a group formed by entrepreneurs that is critical of venture capital culture. Zebras Unite encourages tech companies to focus on sustainability rather than hyper-fast growth. Zepeda said venture capital incentivizes companies to spend their money trying to expand to the point that they will get more money or be bought out. “Criticizing venture capital for being too high-growth is like criticizing fire for being hot,” Zepeda said.

In his email, Munchery’s CEO, Beriker, said he realizes how hard this is for local businesses and that he’s working on potential solutions, although he didn’t specify what those might be.

Estrada recently held a bake sale protest outside of Sherpa Capital. Speaking  at the protest, Estrada said, “What we want is for the venture capitalists, the investors and board members to take responsibility and write a check for the money that we’re owed.”

Last year was the first year Estrada was able to offer her workers health care benefits, and she planned on moving into a bigger kitchen. Losing $20,000 in orders means she has to put her expansion plans on hold.

People suggested she run a crowdfunding campaign to recoup her loses, but Estrada said it shouldn’t be up to her friends and customers to pay for a venture capital bet that went bust.