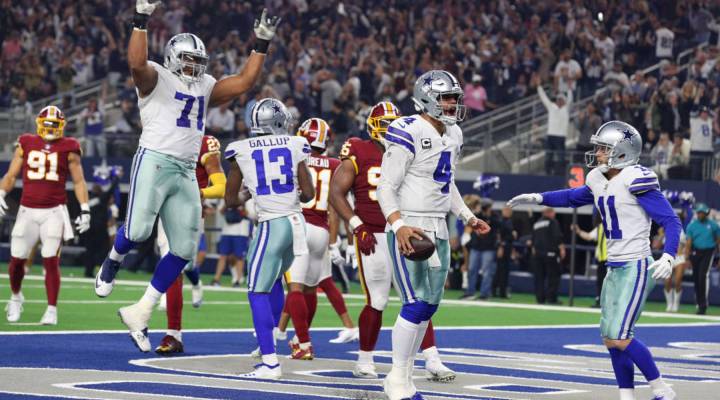 COPY
The Dallas Cowboys including La'el Collins #71 and Cole Beasley #11 celebrate the fourth quarter touchdown by Dak Prescott #4 against the Washington Redskins at AT&T Stadium on November 22, 2018 in Arlington, Texas. Richard Rodriguez/Getty Images

NFL teams have played 11 games so far this season, and fans are just beginning to see the playoff picture coming into focus.

Chances are good all those playoff games will sell out or at least be called sellouts. Determining whether a professional sports game actually is a sellout isn’t as straightforward as it seems.

The Dallas Cowboys say they’ve sold out 265 games in a row. So it makes sense that on, Thanksgiving Day, when the Dallas Cowboys battled the Washington Redskins for first place in football’s NFC East, the team announced a sellout crowd.

Washington fan Ben Jones was there, decked out in a burgundy and gold poncho. Jones said he takes attendance numbers with a grain of salt.

“Whichever number is higher is whichever one they want to say is right,” he said in between taking some ribbing from Cowboys fans about his outfit. “‘Oh, look, we sold all these tickets but nobody came, we’ll call that a sellout’. Or ‘not that many tickets sold, but a bunch of people came so we’ll call that a sellout.’ It’s, like, whatever looks best for their stats, I guess.”

Jones is right. Teams across all sports leagues can basically say whatever they want because there’s no standard.

There are only a couple of ways teams get at that attendance number, said Andrew Zimbalist, a sports economist at Smith College. “The two most basic techniques are what’s often called the drop count or the turnstile count, the number of people who go through the turnstiles. Another is the number of tickets sold,” he said.

Zimbalist said ticket sales will generally be higher than turnstile count, but not all the time. If a team dishes out a lot of free tickets to VIPs, players’ family members and the media, then the turnstile count could be higher.

Sometimes that highest number seems like it just can’t be right. Maury Brown, owner of Bizball LLC, a research and analytics company, said sometimes teams will announce a sellout crowd when everyone watching the game at home can clearly see empty seats.

“If it’s a full sellout but you didn’t meet max attendance or you weren’t fully attended, you do start to ask questions,” he said. “What is and what constitutes a sellout?”

One answer: A lot of times all the tickets are sold, but sometimes season ticket holders just don’t show up or ticket brokers like StubHub and SeatGeek buy up those tickets and can’t sell them.

The capacity of AT&T Stadium, home of the Dallas Cowboys, is 100,000 people; 92,076 people were counted at the game on Thanksgiving. The team called that a sellout.

Trouble is, those empty seats aren’t going to stop sports teams from telling fans all about that sellout. The reason for that is marketing.

“Can they be doing something that’s somewhat nefarious and trying to go around and make it look like more than it is? Sure,” Brown said.

There’s something else weird that goes on when it comes to attendance numbers at sports games: Sometimes teams report more people at a game than what the stadium is supposed to hold. Many teams sell standing room-only tickets, so if their capacity numbers only count the seats in the stadium, the number of fans there could be more than the number of chairs. The reason for that discrepancy is simple.

“You sell tickets and for the post season a standing room-only ticket could be several hundred dollars, and, yes, you sell concessions as well, so this is about money as is everything else in professional sports,” Zimbalist said.

The Cowboys called the Thanksgiving Day game a sellout, even though the team reported 92,076 people in attendance while official capacity at AT&T Stadium is 100,000. The team said it has sold out every game, home and away, since 2002. The Washington Redskins had a 50-year sellout streak end earlier this year. 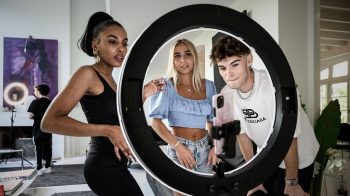