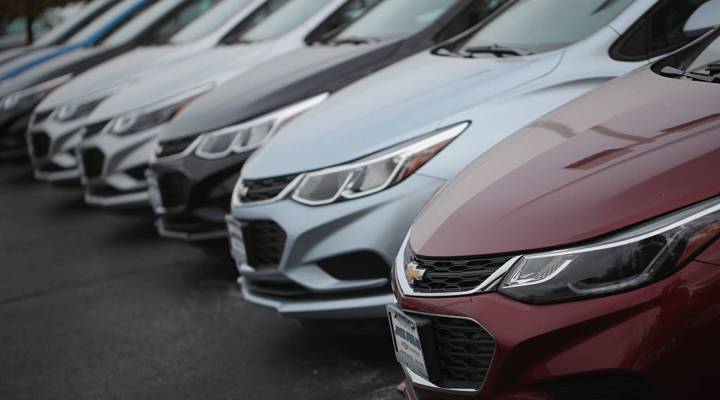 General Motors has some major restructuring plans underway, announcing that it will lay off up to 14,000 factory and white-collar workers in North America and potentially shutter five plants.

Plants in Detroit, Michigan and Lordstown, Ohio (which make vehicles like the Chevrolet Impala and Chevrolet Cruze) are potentially on the chopping block, reflecting the company’s move away from cars sales in the U.S. and toward SUVs and trucks.

The Big Three automakers — which includes GM, along with Ford and Fiat Chrysler — are all moving toward larger vehicles in the U.S. because they bring larger profits. And to help the growing trend of SUV and pickup sales, gas prices are low.

“You know, carmakers always say they build what people want. But they never mention the fact that they spend billions to tell them what they want,” Dan Neil, an automotive columnist for the Wall Street Journal, told Marketplace earlier this year. “It wasn’t just that consumers spontaneously desired a truck that was as big as a house. No, that was a gradual process.”

Here’s a look at some of the lines these companies have discontinued.

Ford announced earlier this year that it plans to stop selling most of the cars it manufactures, and will “transition” to only two vehicles in North America: its Mustang and a new Focus Active crossover set to come out next year.

“We are committed to taking the appropriate actions to drive profitable growth and maximize the returns of our business over the long term,” Ford CEO and President Jim Hackett said at the time.

That means an end for the Focus, Fiesta, Fusion, Taurus and C-MAX.

GM said that it will discontinue U.S. production of the Chevrolet Volt, Cruze and Impala, along with the Buick LaCrosse, the Cadillac XTS and the Cadillac CT6, which has only been on sale in the U.S. since 2016. (However, production and sales of the CT6 will continue in China.)

GM said the major restructurings it just announced will save it $6 billion in cash by the end of next year (that’s in addition to $6.5 billion it had already announced it would cut by the end of this year). Like Ford, the company is dedicated to truck and SUV sales.

CEO Mary Barra said the company has invested in newer architecture for those vehicles, and that it’s planning to hire people with expertise in software and electric and autonomous vehicles.

Fiat Chrysler already announced plans to end its car production in the U.S. back in 2016.

It ceased the production of its Chrysler 200 and Dodge Dart cars, the only two cars it made in the U.S., with the goal of focusing on pickups and SUVs for its Ram and Jeep brands.

“I can tell you right now that both the Chrysler 200 and the Dodge Dart, as great products as they were, were the least financially rewarding enterprises that we’ve carried out inside FCA in the last eight years,” Marchionne said. “I don’t know one investment that was as bad as these two were.”

Last June, Marchionne unveiled the company’s five-year-plan, saying that it would electrify its lines of cars and offer new vehicles like a midsize Ram pickup, a three-row Grand Cherokee and a Maserati midsize crossover.